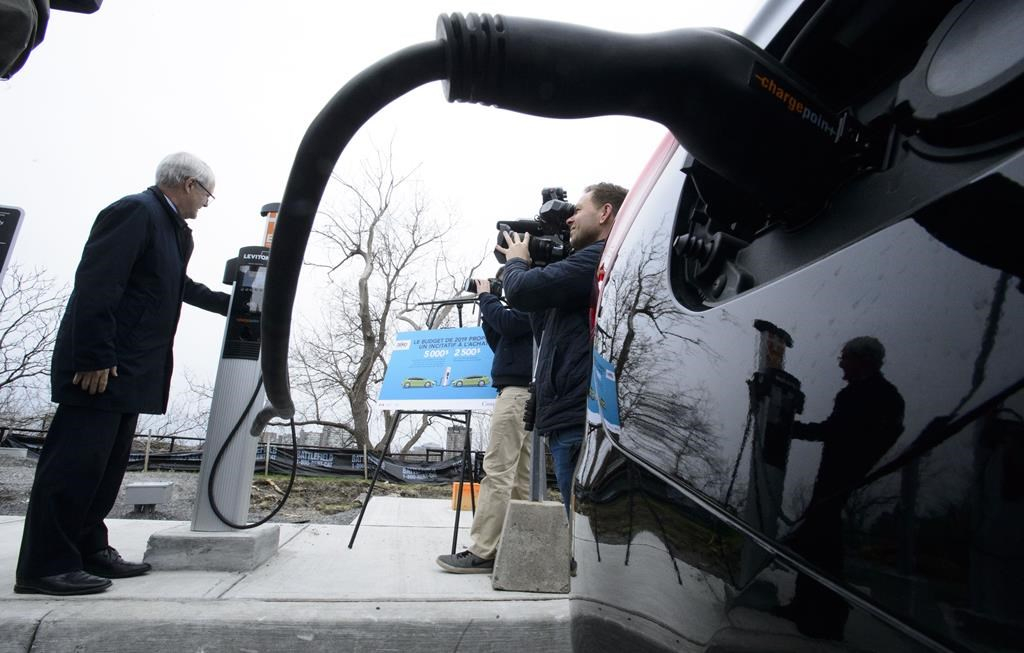 Marc Garneau holds a photo opportunity at a new charge station for electric vehicles on Parliament Hill in Ottawa on May 1, 2019, to mark the coming into effect of the Incentive for Zero-Emission Vehicles Program. File photo by The Canadian Press
Previous story
Next story

National cash rebates convinced more Canadians to buy an electric car in the last 18 months, but Transport Canada says it won't be enough to hit the first zero-emission vehicle sales targets in 2025.

To get there, the federal government introduced the cash rebates for purchases, as well as millions of dollars to build more charging stations, tax credits for businesses that buy electric cars for their fleets and an effort to have automakers set voluntary sales quotas.

Megan Nichols, the director general of environment policy at Transport Canada, told the House of Commons environment committee in late October that sales have been rising but there are efforts underway to see what else needs to be done.

"We know that additional measures are needed to achieve our sales targets," said she said in her written brief to the committee Oct. 26.

Nichols and officials from multiple other departments told the committee an array of options are being studied, including sales quotas, offering money to scrap gas cars for electric ones, and making used electric vehicles eligible for federal rebates.

She also said it's expected the cost of an electric car won't be on par with a comparable gas model for another five years, noting that likely means purchase rebates will be needed at least until then.

The rebates currently offer up to $5,000 for buying a fully electric car and up to $2,500 for plug-in hybrid models. The maximum purchase price of the lowest-end model can't be over $45,000.

The $300-million program started in May 2019 and was supposed to last until 2022. But more than $255 million had already been claimed by the end of September.

Transport Minister Marc Garneau has been looking at expanding the program for more than a year now and said this week it is still something he wants to do.

National cash rebates convinced more Canadians to buy an electric car in the last 18 months, but Transport Canada says it won't be enough to hit the first zero-emission vehicle sales targets in 2025.

"It's been an incredibly popular program," he told The Canadian Press in an interview. "It's something that I would hopefully like to see continued, but it is something that we're looking at."

Joanna Kyriazis, senior policy adviser at Clean Energy Canada, said it's clear more needs to be done to hit the existing targets. She said on top of extending the existing rebate, used cars should also be eligible, and more should be done to target rebates to Canadians who wouldn't be able to afford an electric car without them.

"We want to see a few tweaks to that program to make sure that the money is getting to Canadians who need it most done, not those who would have gone out and bought one anyway," she said.

An electric car mandate that legislates the sales targets is also something that should be considered, she said. Quebec and British Columbia, the only two provinces with both provincial rebates and sales quotas, also accounted for almost eight in 10 electric car purchases.

Data from the lobby group Electric Mobility Canada further shows sales grew to 3.3 per cent in the first half of 2020, a period of time when all car sales were down because of the COVID-19 pandemic.

The group said there are 168,000 electric vehicles on Canadian roads now, less than one per cent of the 23 million light-duty vehicles registered in total.

Currently, light-duty vehicles produce more than one-tenth of Canada's greenhouse gas emissions, and total emissions from them have grown 10 per cent in the last decade, despite tougher emissions standards for vehicles.

That's mostly because more cars are on the road and SUVs and pickup trucks, which produce more emissions per kilometre, now account for almost eight in 10 passenger vehicles sold in Canada.

— With files from Christopher Reynolds.

Ontario is subsidizing Ford Motors for building electric cars and also helping battery production, but not encouraging Ontarians to buy these cars. It needs to restore its subsidy to buyers.