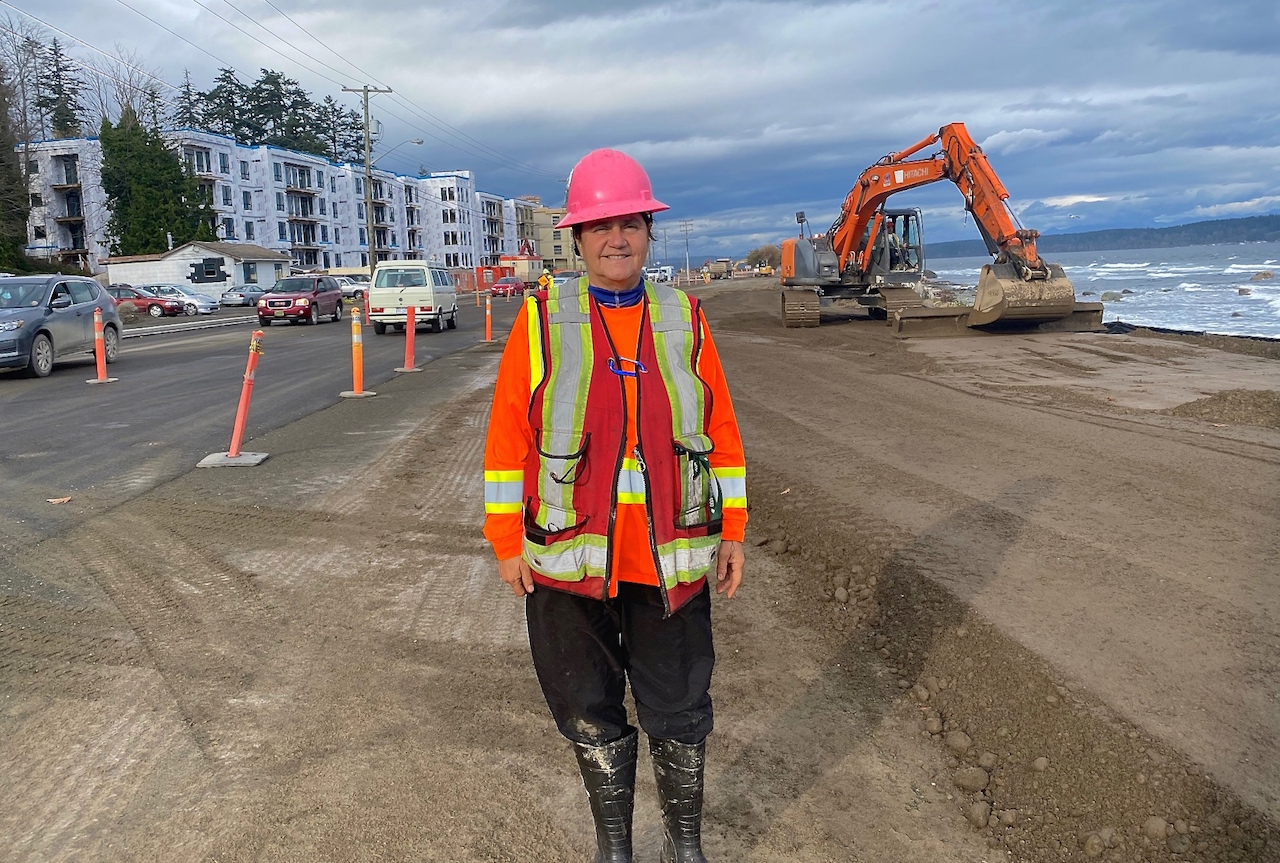 Archeologist Christine Roberts’ work takes her up densely forested mountainsides and down coastal beaches as she delves into the lives of her First Nations ancestors.

But lately, Roberts’ job has her sifting for treasure on the side of a highway with the roar of traffic and the ocean around her.

Roberts, a member of the Wei Wai Kum First Nation, is monitoring excavations during upgrades to Highway 19 along the east coast of Vancouver Island near Campbell River.

The highway, constructed decades ago, runs through the heart of her nation’s traditional territory.

Much of the asphalt being torn up lies on historical sites already disturbed during previous bouts of construction, Roberts said.

But now as crews work, they call out Roberts any time they uncover anything that might be significant — especially if they spot signs of a shell midden.

Shellfish remnants and other materials deposited in middens are valuable evidence of former Indigenous communities, and are archeological caches that can also include animal bones, artifacts or tools and even human remains.

And so far, Roberts has struck gold.

“It’s been pretty interesting because I think we’ve found over 30 different spots that weren’t documented before,” Roberts said.

She and her co-workers have also unearthed bone points likely embedded in an ancient herring rake, chipped stone artifacts and a human finger bone.

The excitement of unearthing First Nations’ history and their connection to their land doesn’t get old for archeologist Christine Roberts, a member of the Wei Wai Kum First Nation.

“So, a lot of (these sites have) been disturbed before,” Roberts said.

“But just the fact of knowing that they are there is really interesting, and it just adds to our story a little bit.”

One find that particularly intrigues Roberts is a beautifully carved bone ornament that emerged from the debris.

“When you’re going through a bunch of dirt and then something like that pops up, it's pretty cool,” she said, adding it might be part of a bracelet, earring or amulet.

The excitement of unearthing First Nations’ history and their connection to their land doesn’t get old for Roberts. That wonder and satisfaction is what hooked her in the first place.

“I’ve kind of found my little niche, I guess,” said Roberts, who got her first taste of the discipline while she was working as a First Nations monitor, accompanying archeologists in the field.

“I used to go out with the archeologists in the field, but now I’m that archeologist,” she said.

“I really enjoyed the job, so I got my degree.”

Roberts makes it sound simple. But she was a single mom of six, with three kids still at home.

She had to do a lot of commuting to Vancouver Island University in Nanaimo, a two-hour drive away, and juggle her family schedule to make her schooling happen.

But her efforts resulted in interesting work and unique experiences, she said.

Roberts participated in an extensive, multidisciplinary archeological project with the Hakai Institute that examined 13,000 years of human habitation on Quadra Island and research into First Nations clam gardens.

More recently, much of Roberts’ work with the Wei Wai Kum involves investigating, protecting or monitoring archeological sites on traditional territory, particularly in areas where forestry or other industrial activity is occurring.

That can mean being helicoptered into remote forestry cut blocks and slogging around in all kids of weather.

“It’s a lot of traipsing around,” Roberts said.

“They can drop us off and you might have to climb up 45 minutes just to get to the block.”

But Roberts would rather be outside than at a desk.

These are trees, typically red or yellow cedars, which ancestors harvested for bark, wood or otherwise carved or adapted, she said.

“They usually took about six inches of the bark off, and once we've done that, the tree kind of curls over on itself,” Roberts said.

The trees are protected, and if enough are found in a cut block, logging the block can be prohibited, she added.

Roberts, who has been working as an archeologist for two decades, likes that the results of her work benefit her nation directly.

“It’s something that needs to be done and it's in my own territory. And, it's the history of my people,” she said, adding she relies on traditional knowledge-keepers for insights into her work.

Iain McKechnie, who heads the Historical Ecology and Coastal Archaeology Lab at the University of Victoria, said the ever-increasing number of Indigenous archeologists brings additional richness to the discipline.

“Knowing your own territory and being able to consult with your community members about that territory, and then bringing forward all of the skills that archeologists globally practise — that's the strongest kind of position that you can have as an archeologist,” McKechnie said.

The 14,000 years of human history along the B.C. coast overwhelmingly equates to Indigenous history, he added.

So, a culturally informed approach to archeology benefits both Indigenous communities and academia, McKechnie said.

“That enables a real sharpening of our understanding of human history,” he said.

Beyond gaining more knowledge about their ancestors, First Nations can use archeological data to inform contemporary conservation or environmental management decisions, or to strengthen negotiations with various levels of government or industry, McKechnie said.

While Roberts’ work around the past can inform the present, it’s also shaping the future.

She has taught schoolchildren, Indigenous and not, about her work investigating clam gardens.

“They seem to enjoy it, and it’s nice to get them looking at the beaches where they live a little differently,” Roberts said.

First Nations have been shaping and adapting their habitat on the B.C. coast for millennia, she said.

So, her work gives her a profound sense of belonging, a tie to the land she works on.

“I love my job,” Roberts said. “I always feel I’m where I belong. Where I should be.”