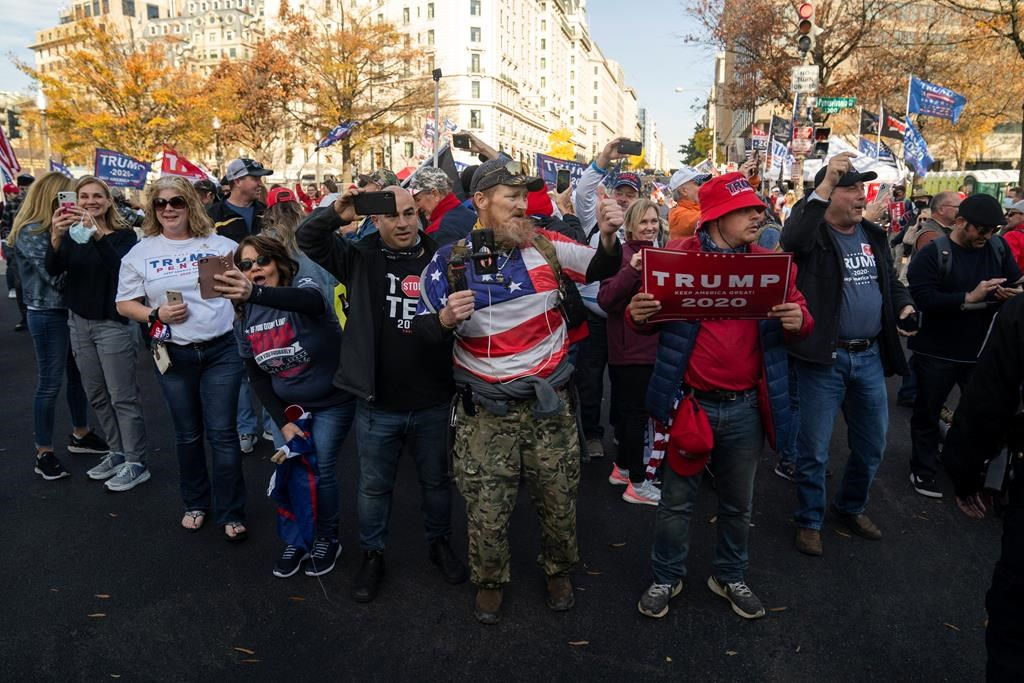 Supporters of President Donald Trump cheer as his motorcade drives past a rally of supporters near the White House, in Washington, on Saturday, Nov. 14, 2020. Photo by The Associated Press/Evan Vucci
Previous story
Next story

Tens of thousands of the 72 million Americans who voted for Donald Trump showed up on his doorstep Saturday, urging on the president in his quixotic bid to subvert the results of last week's election.

Police cordoned off an enormous swath of downtown Washington, D.C., from the White House to Capitol Hill, steering an endless caravan of Make America Great Again devotees down Pennsylvania Ave. to their ultimate destination outside the U.S. Supreme Court.

The stream of red, white and blue — dotted throughout with now-familiar Trump 2020 flags, banners and the Stars and Stripes — included a large, stone-faced faction of the white supremacist Proud Boys, their black-and-yellow shirts emblazoned with the president's infamous message from the presidential debate: "Stand back and stand by."

Across the street from the Canadian Embassy, a woman with a megaphone shouted the rallying cry from the pro-Trump online conspiracy-theory group QAnon: "Where we go one, we go all."

Leading up to the weekend, it was unclear whether the event, promoted on social media in recent days under various names, would attract many participants or even go ahead at all.

But hours before the march was scheduled to begin a few blocks from the White House, it was clear from the number of people already filling the streets that turnout would not be a problem.

"We drove from Florida because we knew everybody was coming," said Cheri Lavigne, a real estate entrepreneur from Jacksonville who spent 13 hours in the car to get to D.C.

Trump's detractors, who are legion in a famously liberal city that voted for Democrat Joe Biden by a margin of more than 90 per cent, also came out in force Saturday to rain abuse down on the MAGA crowd.

Bring it on, some of them seemed to say.

Thousand of Americans who voted for Donald Trump marched in Washington in a massive show of support. #USelection. #MarchForTrump #MAGA #DonaldTrump

Throughout the morning, a steady parade of Trump supporters making their way to the main event ran the gauntlet through Black Lives Matter Plaza — hallowed ground for social justice activists that played host to months of angry protests against violent police treatment of Black people.

They brazenly strolled past a line of counter-protesters who were busy urging the president to pack up and leave, inviting fierce exchanges of angry words and extended middle fingers.

One solitary protester, her face mask emblazoned with Joe Biden's campaign logo, taunted the mostly maskless Trump crowd with a steady barrage of profanities and insults. Whenever one came too close, she cowered mockingly: "I don't want to catch COVID."

On several occasions, the tensions boiled over. Police detained a man in a Black Lives Matter T-shirt after a profanity-laced altercation with a Trump supporter who accused him of grabbing her hair as she passed.

And outside the Supreme Court, Trump loyalists got into a shoving match with a lone antagonist, chanting "USA, USA" to drown out his protestations. The clashes drew more intense as night fell and police used bicycles to separate the factions. At least 10 people were arrested.

Americans continue to support Trump, Lavigne said, because they see him as an ally in defending their closely guarded freedoms — freedoms they believe are under assault in a year defined by the COVID-19 pandemic.

"There's always going to be things that need to be corrected and worked on, but to take all of our freedom away — none of us are willing to stand for that," she said.

"This" — she waved at the passing crowd — "just reiterates how strongly we all feel. We love our country, our president, our flag and what it stands for."

Trump himself put in an appearance earlier in the day, directing the presidential motorcade through the downtown core past throngs of supporters before heading to Virginia for another day of golf.

"Hundreds of thousands of people showing their support in D.C.," he tweeted upon his return. Police did not provide an estimate of the size of the crowd.

"They will not stand for a Rigged and Corrupt Election!"

Even though senior government officials and electoral watchdogs have declared the Nov. 3 presidential election to be free of fraud — "the most secure in American history," according to the Department of Homeland Security — Trump has steadfastly refused to concede defeat to Biden.

The issues that Trump's campaign and its allies have pointed to are typical in every election: problems with signatures, secrecy envelopes and postal marks on mail-in ballots, as well as the potential for a small number of ballots miscast or lost.

With Biden leading Trump by wide margins in key battleground states, none of those issues would have any impact on the outcome of the election.

Trump’s campaign has also filed legal challenges complaining that their poll watchers were unable to scrutinize the voting process. Many of those challenges have been tossed out by judges, some within hours of their filing.

Some of those dismissals came on Friday in the swing states of Arizona, Michigan and Pennsylvania.

This report by The Canadian Press was first published Nov. 14, 2020.