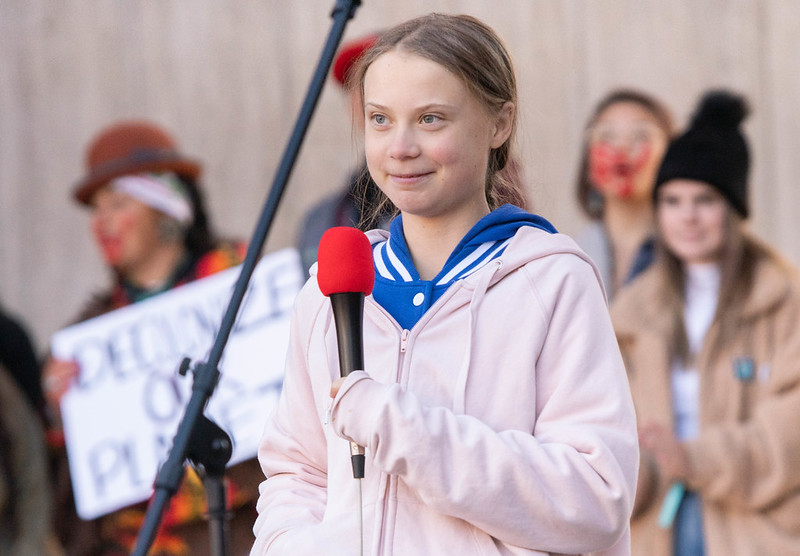 Greta Thunberg holds a climate change rally at the Greek Amphitheatre in Denver, Colo., in 2019. Photo by Anthony Quintano via Flickr (CC BY 2.0)
Previous story
Next story

Spoiler alert: Women have been leaders in the climate movement since scientists first realized that carbon dioxide could influence Earth’s temperature — which, by the way, was first theorized by a woman.

Rewind more than 150 years ago to 1856, and a research paper by American scientist Eunice Newton Foote first made the connection between carbon dioxide and planetary heating. Fast-forward to the 1960s, and sexism made it hard for General Motors climate scientist Ruth Reck to do her job. Passed up for promotions and told she was a distraction to men, Reck says she still managed to produce research showing that aerosols from cars and factories caused atmospheric heating at the Earth’s poles.

For every mansplaining “Climate Boi,” there's at least one woman — probably more — just getting things done. Often, she’s doing more than her share of trying to protect her community and the environment without the profile or accolades garnered by her male counterparts.

Where we aren’t seeing women, however, is in the Canadian government's green recovery plans.

The gendered lines of the economic recession triggered by COVID-19 first snapped into focus in the spring when data crunching revealed that women made up 70 per cent of March job losses in the 25 to 54 age bracket. Racialized, low-income and immigrant women remain among the worst impacted by this economic “she-cession.”

Yet, defenders of the fossil fuel industry are throwing shade at the idea of a “she-cession,” even as women climate leaders are pointing out the difficulties arising out of a lack of child care. As two women working in one of the world’s biggest climate campaigning organizations, working moms’ struggle to juggle the fate of the planet and raising children is all too familiar.

But despite the federal government’s promises to enact a green recovery and Action Plan for Women in the Economy, we’ve seen no guarantees that these plans will be integrated. Feminist groups like Oxfam have already expressed frustration that their lack of access to federal decision-makers has meant that recovery programs aren’t as gender-responsive as they might have been.

For example, since the pandemic struck, the federal government has made several green funding announcements but has also subsidized the fossil fuel sector, including with self-described “clean technology investments.” Will women benefit from these considering that they make up only about a quarter of the energy (including clean energy) workforce?

A green transition has to include, support and listen to women — from a national child-care program that allows women to fully participate in building a green and just economy to jobs that address the she-cession.

By consciously making space for women in the green recovery from COVID-19, we’ll find new pathways for fixing the economic and ecological imbalances with which our society is reckoning, write @jessatGP and Lydie Padilla.

We absolutely need to replace oil and gas with more sustainable forms of energy. We need to build affordable green housing and retrofit buildings to be more energy efficient. We need to electrify public transit. But these kinds of “shovel-ready” decarbonization projects heavy on construction also tend to be male-dominated. Women should be intentionally included in green job creation and retraining programs, as well as be supported to join and remain in STEM fields (science, technology, engineering and mathematics). These are critical disciplines essential to clean energy innovation but where women (especially racialized women) face difficulties and remain underrepresented.

At the same time, a green “recov-her-y” challenges us to think less narrowly about what defines a “green job.” If we really want to heal what’s ailing us, we need to imagine beyond bricks, mortar and labs. As we’ve come to realize, child care, elder care, social work and education are “the glue that builds humane, resilient communities,” as the 2015 Leap Manifesto put it. They’re low-carbon sectors in which women are already leading, but remain underpaid and undervalued.

Women’s contributions to the economy are too often left untallied — scrawled in the margins, bracketed, footnoted, appended — left to us readers to add up. That, of course, goes double for Indigenous and racialized women. By consciously making space for women in the green recovery from COVID-19, we’ll find new pathways for fixing the economic and ecological imbalances with which our society is reckoning. After all, women are already showing our leaders the way forward.

Lydie Padilla leads Greenpeace Canada’s green and just recovery campaign and is a full-time mom. Jesse Firempong is a climate justice communicator on the campaign with a background in gender justice.

I doubt that an American was

I doubt that an American was the first to connect carbon dioxyde and climate. Joseph Fourier was also involved, but I am not sure about the date of his publication" see: https://www.irishtimes.com/news/science/how-joseph-fourier-discovered-th...

The she-session has not been

The she-session has not been top of mind even when female politicians are at the helm of the green recovery. Take MP Catherine McKenna who is now in charge of the infrastructure file. In her interview with Linda Solomon Wood (Nat'l Observer) this past summer, her entire focus was on "building electric buses, and charging stations, paying for green retro-fitting of buildings and building green affordable housing, and developing clean tech" (paraphrased), all of which is work traditionally performed by men. While McKenna mentioned "social infrastructure" which seems to be political-code for including women in the green recovery, she dodged a question by this writer about what she intends to do to help women get into the green recovery workforce. And, yes, childcare is necessary but it's not enough, not nearly enough. What about training and re-training specifically targeting women to be fully capable of taking green recovery jobs and that provides FREE childcare while such training and re-training is occurring? And what about attaching hiring guidelines for such jobs that require employers to hire women, women of colour, indigenous women and that also encourage the promotion of especially POC women into supervisory positions in green industry? And what about throwing federal money at green entrepreneurship that is owned, managed, and supervised by women? McKenna and the entire Parliament needs to think outside of the box and WAKE UP to how much they are leaving women behind in their great green recovery vision.