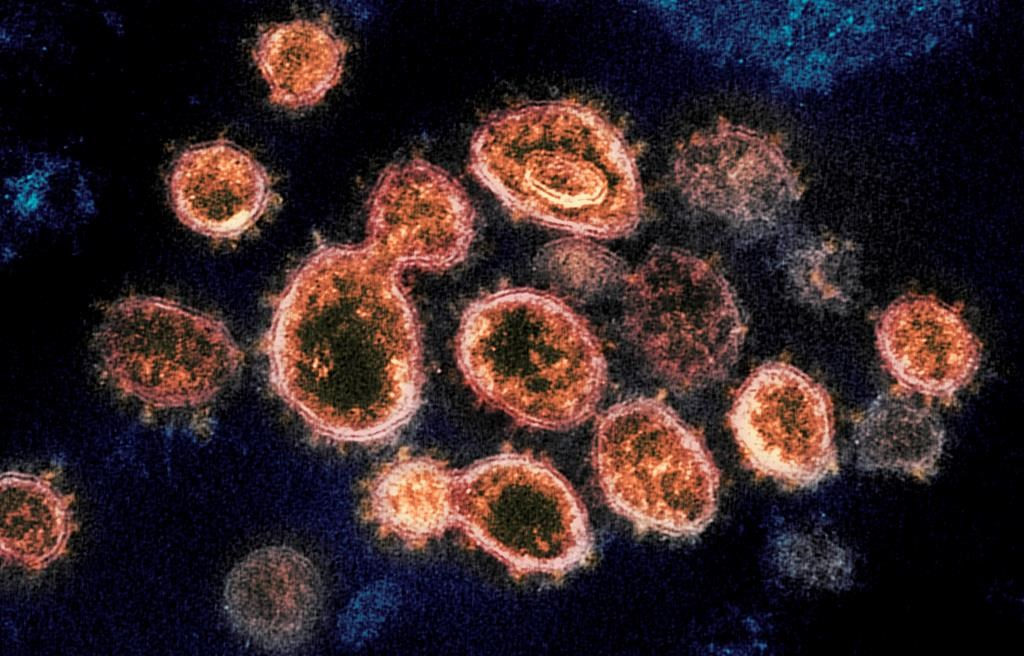 SARS-CoV-2 virus particles, which causes COVID-19, emerge from the surface of cells & isolated from a patient in the U.S. and cultured in a lab in a 2020 electron microscope image. AP/ NIH - Rocky Mountain Laboratories
Previous story
Next story

Prime Minister Justin Trudeau will amplify his plea for Canadians to stay home as much as possible after alarming new projections for the spread of COVID-19 in Canada are released today.

The updated projections are expected to forecast a dramatic rise in cases over the next few weeks — to as much as 60,000 new cases a day by the end of the year — if Canadians don't strictly limit their contact with people outside their households.

Trudeau is to hold a news conference after the latest modelling is unveiled by chief public health officer Dr. Theresa Tam this morning.

To underscore the importance of minimizing contacts, Trudeau will conduct the news conference outside his home, Rideau Cottage — the site of his daily briefings during the first wave of the deadly pandemic last spring.

He ended that practice over the summer when the pandemic went into a bit of a lull and, throughout the fall until now, he has joined Tam and select ministers at news conferences on Parliament Hill once or twice a week.

Tam has already warned that Canada is on track to hit more than 10,000 cases per day by early December if Canadians maintain their current rate of contacts outside their household.

That's more than double the current daily case count, which is already straining the health care system in some regions.

Sources briefed on the latest modelling say it projects a much worse scenario by the end of December — 20,000 cases per day at the current rate of contacts and as much as 60,000 a day if Canadians increase their number of contacts as the holiday season approaches.

The sources spoke on condition of anonymity because they were not authorized to speak publicly about the modelling before its official release.

Tam has said Canadians need to reduce their current rate of contact with others by at least 25 per cent in order to flatten the curve.

Prime Minister Justin Trudeau will amplify his plea for Canadians to stay home by again working from home himself as COVID-19 cases soar. #secondwave #Covid19 #cdnpoli

And last week, she and her deputy, Howard Njoo, gave a graphic description of the consequences if the trajectory toward more than 10,000 cases per day is not halted.

At the current level of just under 5,000 cases per day, Tam said routine medical procedures are being cancelled, intensive care beds are almost full and health-care workers are exhausted.

"So you can only imagine that if we got to that level (of 10,000), that the pressure on the health-care system will be huge," she told a news conference in Ottawa on Nov. 13.

Njoo pointed to what happened in northern Italy and New York City last spring, when their health systems were overwhelmed.

"Doctors were having to make a life and death decision in terms of who would be on a ventilator, who wouldn't. And who wants to be in that position?"

For several weeks, Trudeau has been almost begging premiers to impose more stringent restrictions on businesses and social gatherings in order to get the soaring caseload under control.

He has warned that the federal government's resources are not infinite and that, if cases continue to increase exponentially, Ottawa's ability to help premiers cope with the health crisis will be strained.

Trudeau has suggested, for instance, that Ottawa might have to begin choosing which regions will get personal protective equipment or Red Cross help to operate hard-hit long-term care homes.

By The Canadian Press | News, US News, Politics | November 19th 2020
Coronavirus in Canada