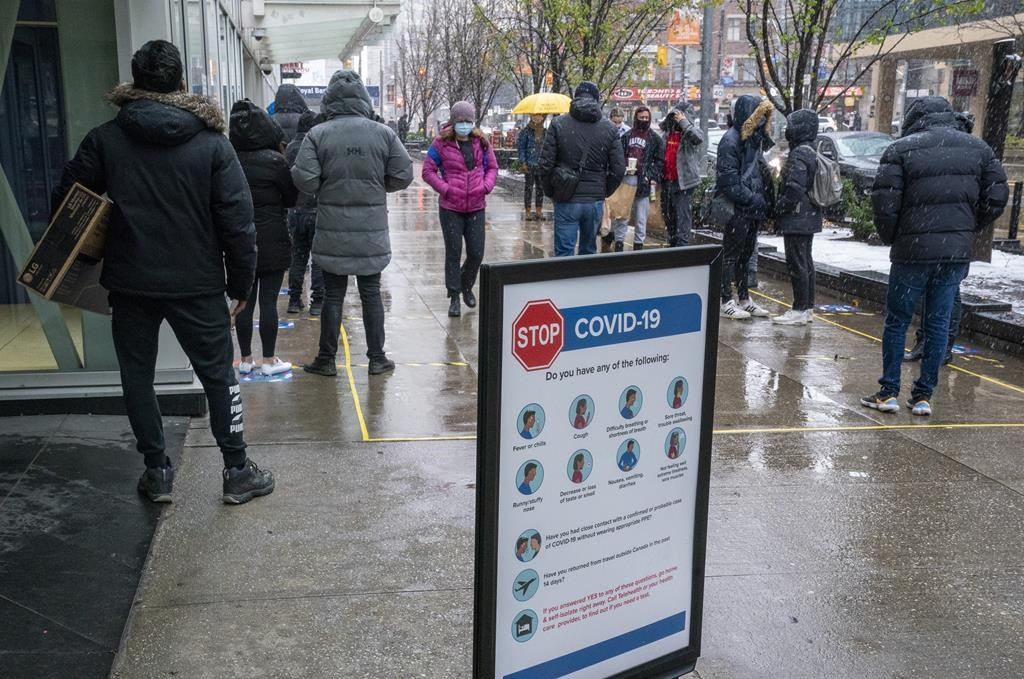 Crowds of people line up outside an electronics store in Toronto on Sunday, November 22, 2020. The region is heading back into lockdown on Monday. Photo by The Canadian Press/Frank Gunn
Previous story
Next story

Regions across Canada are braced for a host of new public health restrictions as the second wave of the COVID-19 pandemic sent case counts soaring from coast to coast.

Surging case counts that reached record heights in several provinces over the weekend spelled the short-term end to restaurant and retail service in some infection hot spots, while others prepared to further cap public and private gatherings in a bid to halt the spread of the virus.

In Ontario, which reported 1,534 new cases and 14 additional deaths on Sunday, shoppers flocked to local stores in Toronto and neighbouring Peel Region a day before both districts were slated to enter the lockdown phase of the provincial pandemic response plan.

Janet Reid visited Toronto's Eaton Centre on Sunday afternoon to do some last-minute shopping in the hours before non-essential retailers close their doors to in-person visitors.

She said she hoped the restrictions, which also include the closure of salons and the suspension of indoor dining at local restaurants, would help bring the COVID-19 numbers down.

"It's going to take everybody to do it, and not just a few people to do it," Reid said.

Public health officials in Atlantic Canada have also announced new limits on gatherings as the region saw a recent increase in COVID-19 cases, marking a reversal from the stable figures reported for months.

Nova Scotia's Hants County and the Halifax area will be under stricter rules as of Monday, including a limit of five people who can gather without social distancing, down from the previous cap of 10.

The province reported 11 new COVID-19 cases on Sunday, bringing its number of active diagnoses to 44.

"I know this will not be easy, but it's an initial step to contain the community spread and avoid the potential to overwhelm our health-care system," Dr Robert Strang, Nova Scotia's chief medical officer of health, said in a Friday statement outlining the new rules.

The small town of Deer Lake, N.L., also sounded the alarm over a regional spike in cases when it announced a two-week closure of some municipal buildings and asked local businesses to follow suit.

The slew of pending restrictions is in line with advice from Canada's top public health officer, Dr. Theresa Tam, who on Sunday urged people to limit gatherings and only go out for essentials ahead of the holiday season.

Tam said Canada is seeing "rapid epidemic growth," as the country has now recorded 330,492 confirmed cases of COVID-19 since the pandemic began.

Alberta added to that tally with 1,584 new cases on Sunday, marking the fourth straight day the daily count has reached a record high.

Health officials in Nunavut reported 18 new cases on Sunday in Arviat, a small community on Hudson Bay that now has 98 active infections.

The territory, which went into a two-week lockdown on Nov. 18, currently has 128 active COVID-19 cases. No deaths have been reported.

"Health teams are working around the clock in Arviat, Whale Cove and Rankin Inlet to trace, test, isolate and contain the spread of the virus," Dr. Michael Patterson, Nunavut's chief public health officer, said in a statement.

Meanwhile, Quebec reported 1,154 new COVID-19 cases and 23 additional deaths on Sunday, bringing the highest provincial total in the country to 132,042 cases and 6,829 deaths since the pandemic began.

Officials in New Brunswick reported six new COVID-19 cases and warned that three schools may have been exposed to the virus. The province set a single-day record on Saturday with 23 new cases.

Saskatchewan logged 236 new cases of COVID-19 on Sunday, while Manitoba recorded 243 new instances of the virus and 12 related deaths.

Manitoba's most recent round of stringent measures took effect Friday. The Hanover School Division, which includes Steinbach, about 60 kilometres south of Winnipeg, will switch to remote learning only on Tuesday.

This report by The Canadian Press was first published Nov. 22, 2020.

-- With files from Anita Balakrishnan in Toronto, Rob Drinkwater in Edmonton and Sarah Smellie in St. John's.