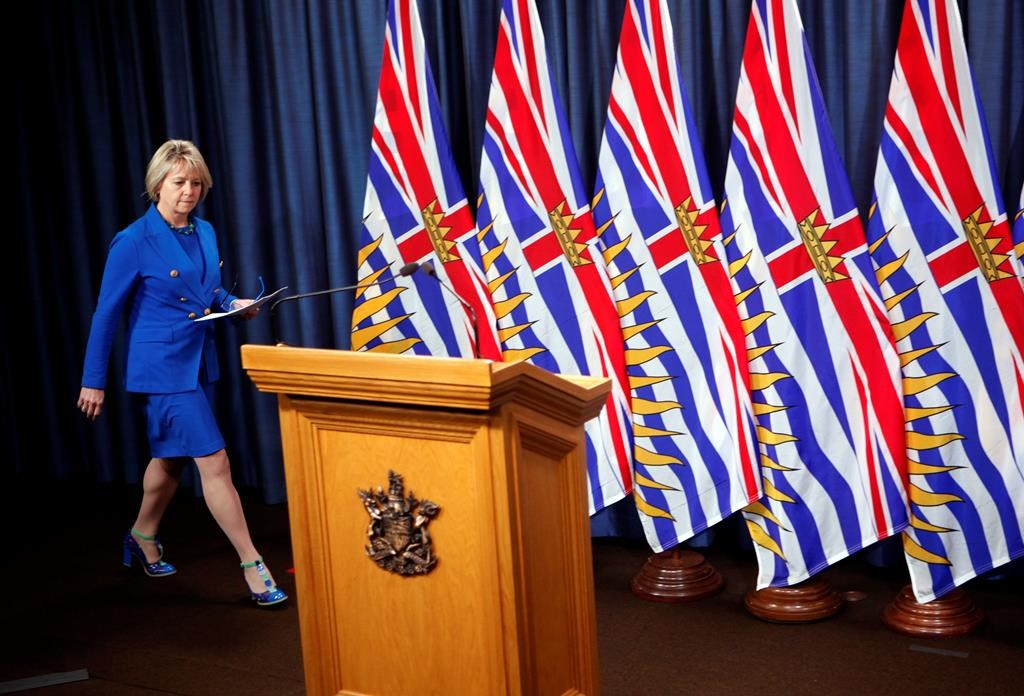 Provincial Health Officer Dr. Bonnie Henry arrives to the podium for a press conference in the press theatre at Legislature in Victoria, B.C., on Thursday, October 22, 2020. File photo by The Canadian Press/Chad Hipolito
Previous story
Next story

British Columbia is making it mandatory to wear masks in public spaces, while social interactions will be under new restrictions until Dec. 7 because of a surge in COVID-19 cases.

Provincial health officer Dr. Bonnie Henry earlier imposed restrictions on social gatherings in areas covered by the Fraser and Vancouver Coastal health authorities, but says COVID-19 is spreading to other places and the order will now be provincewide.

Henry said Thursday the previous measures have failed to decrease the number of cases and the health-care system is under strain.

"We need to urgently reduce the level of transmission and our cases across the province in these next two weeks," she told a news conference.

When asked what health officials would examine to determine whether the stricter measures are working, Henry said a particular focus would be paid to the percentage of cases that cannot be linked to a known COVID-19 cluster.

All worship services and community and social events will be suspended, along with high-intensity group fitness, such as interval training, hot yoga and spin classes. There are exceptions for baptisms, weddings and funerals, but they are limited to 10 people.

“It has been challenging and we’ve seen impacts on our health-care system as well,” she said.

People need to treat the second wave of COVID-19 like they did during the spring, when social interactions were largely curtailed, Henry said.

The province tried to limit the spread of COVID-19 through regional controls, she said, but it has come to a point where action is needed across B.C.

British Columbia is making it mandatory to wear masks in public spaces, while social interactions will be under new restrictions until Dec. 7 due to surge in COVID-19 cases. #bcpoli #Covid19 #COVID19BC

Limiting the transmission of the virus has proven more difficult during colder months, particularly from indoor activities, Henry added.

The province also announced one new death, for a total of 321.

The goal of the measures is to reduce social interactions, and officials will be encouraging workplaces to continue allowing employees to work from home, if possible.

Henry said the decision to suspend social and community gatherings was made “very reluctantly.”

“Right now, I have concerns that we have transmission happening even if it is supposedly with the appropriate measures in place,” she said.

Transmissions have been seen in businesses largely among employees congregating in break rooms and other staff areas, Henry said.

“I think it’s fair to say we’re all a little tired of this and people perhaps got a little complacent in some areas. Now we’re seeing that we need to pay attention in aspects of the business,” she said.

Authorities will be stepping up inspections of places, with a particular focus on bars, to ensure safety precautions are followed.

Despite recent COVID-19 outbreaks at schools, Henry said students will not be required to wear masks. Schools are a safe place where transmission of the virus is largely not being seen, she said.

Exposure to the virus is happening, which reflects what is going on in the wider community, but the province has not reached the point where it would consider closing schools, Henry said.

"We have to do our best as a community so we can protect the essential work going on in schools," she said.

A group led by a deputy provincial health officer will be set up in the Lower Mainland to monitor school outbreaks and transmissions.

The safety measures and restrictions will be re-evaluated on Dec. 7, Henry said.

PM says military could help distribute COVID-19 vaccine, but Canada not there yet