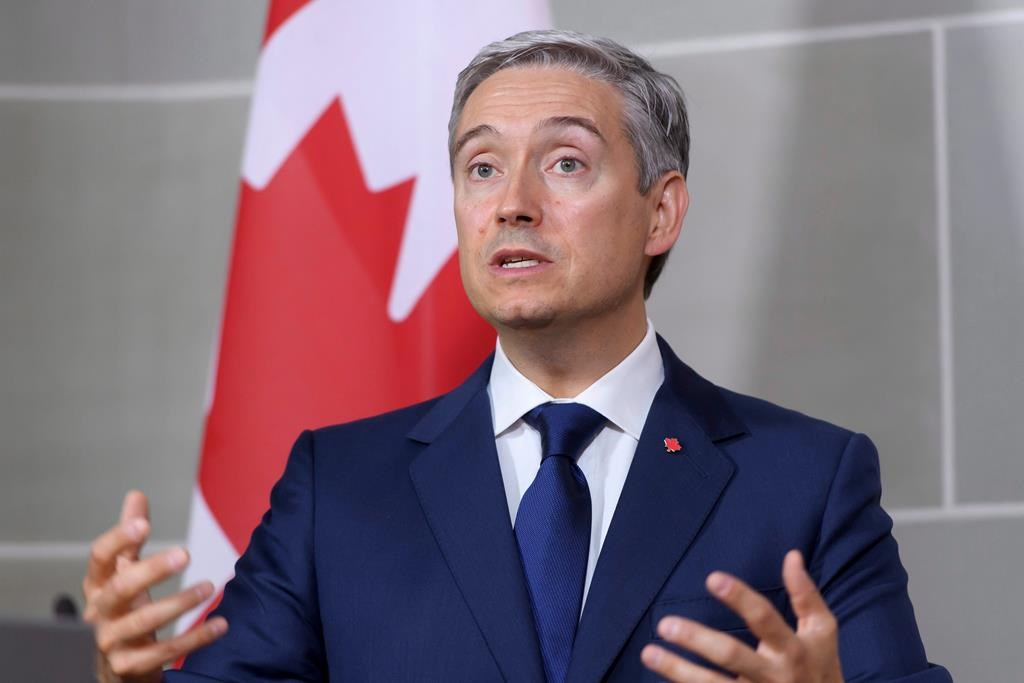 Testifying before the House of Commons Canada-China relations committee, Champagne urged MPs to keep the fate of Michael Spavor and Michael Kovrig in mind when they spout off about the perils and perfidy of China's Communist regime.

"I know, Mr. Chair, that some like to talk tough on China," Champagne told the committee.

"To those who are seduced by this one-dimensional view, I say this: while it is easy to be tough, let's continue to be smart. Let's not fall into the temptation of tough and irresponsible rhetoric that will generate no tangible result for Michael Kovrig and Michael Spavor, our farmers and entrepreneurs, and human rights victims and advocates."

The two Michaels, as they've come to be known, have been imprisoned in China for almost two years in retaliation for Canada's arrest of Huawei executive Meng Wanzhou on an extradition request from the United States.

Canadian farmers, fishers and exporters have also been hurt by retaliatory measures taken by China in the wake of Meng's arrest.

Champagne's plea came a week after the House of Commons passed a Conservative motion calling on the government to decide by Dec. 18 whether to allow Huawei to be involved in development of Canada's next generation 5G wireless network.

The motion, passed with the support of all opposition parties over the objections of the government, also called on the government to unveil within 30 days a robust plan to deal with growing intimidation by China of Canadians within Canada's borders.

The motion is not binding and Champagne told the committee that government action on both fronts will be guided by national security requirements, not by arbitrary deadlines.

Since taking over the helm of the Conservatives last August, Erin O'Toole has made standing up to China a central pillar of his pitch to Canadian voters.

The Conservative leader has accused Prime Minister Justin Trudeau's Liberal government of being "willing to look past the Chinese government’s numerous human rights abuses, flagrant trade abuses and security issues because the potential to sell into the massive Chinese market was so lucrative."

"Trudeau’s approach to China has failed, and it’s weakened our standing in the world. We must stand up for our citizens who have been detained as bargaining chips in an extradition case, even if it leads to more reprisals from Beijing," O'Toole argued in an op-ed in the National Post in September.

O'Toole has called for an "eyes wide open" approach to relations with China. But Champagne contended that's precisely the approach his government is taking.

He argued that Canada's policy towards China has evolved as China itself has evolved, increasingly flouting the international rules-based order, violating the human rights of Uighurs in Xinjiang province and democracy protesters in Hong Kong, and engaging in "coercive diplomacy" to get its way.

"We see a country and a leadership increasingly prepared to throw its weight around to advance its interests."

Champagne said the government has adopted a new framework for dealing with China. He described it as a three-pronged approach in which there will be areas, such as human rights abuses, where Canada needs to challenge China.

China's more aggressive posture is not just a challenge for Canada, he argued. Countries around the world are grappling with it.

Champagne said the best antidote is for all liberal democracies to band together to speak with one voice to pressure China to change its ways — just as Canada has rallied other countries to speak out against the detention of Kovrig and Spavor.