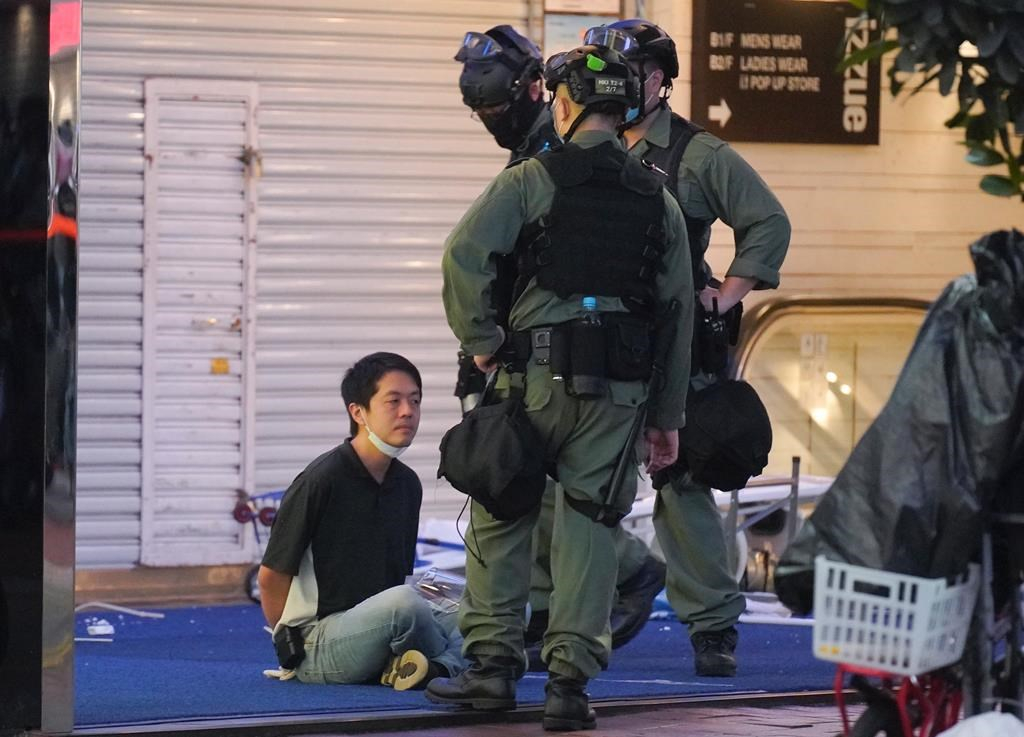 Justin Trudeau's Liberal government is facing contradictory calls to either stand up to China or give in to so-called "hostage diplomacy" — with particular pressure coming from stalwarts of former Liberal prime minister Jean Chretien's administration.

Allan Rock is the latest former Chretien-era minister to advocate that the government end extradition proceedings against Meng Wanzhou, in hopes that China will release two Canadians imprisoned arbitrarily in apparent retaliation for the Huawei executive's arrest in Vancouver in December 2018.

Rock said Wednesday that Chretien himself supports his initiative.

"I spoke to Chretien this morning because he called me to say he agreed with me," Rock said in an interview, adding that he did not speak to the former prime minister before making his public intervention in the Meng case.

Rock got further backup Wednesday in a letter to Trudeau signed by 19 former politicians and diplomats who urged that Meng be freed in a bid to win the release of detained Canadians Michael Spavor and Michael Kovrig.

Signatories to the letter, obtained by The Canadian Press, included Chretien-era ministers Lloyd Axworthy and Andre Ouellet, former Conservative minister Lawrence Cannon and former diplomat Robert Fowler, who was himself taken hostage in 2008 in Niger.

It was also signed by two former chiefs of staff to Progressive Conservative prime minister Brian Mulroney — Hugh Segal and Derek Burney, who also once served as Canada's ambassador to the United States.

"It has now been more than 550 days since the two Michaels were locked into a Chinese prison," says the letter, also signed by Rock and former Supreme Court justice Louise Arbour, who went public earlier this week with their call to free Meng.

"Their detention was completely unlawful and unjustified. Reliable accounts describe their conditions of confinement as tantamount to torture ... We believe that the two Michaels will remain in their Chinese prison until Meng is free to return to China."

The signatories acknowledge that "it does not sit well with anyone to yield to bullying or blackmail." But they argue that standing firm is no guarantee China won't resort to arbitrary detentions again in future to get its way.

"Indeed, if Canada resists the pressure arising from the detention of the two Michaels, China might well decide that next time it will need to escalate by detaining more than two Canadians," the signatories write.

A group of senators, meanwhile, called on the Trudeau government to impose sanctions on Chinese officials over China's treatment of its Muslim minority, its increasing restriction on freedoms in Hong Kong, and its arrests of Spavor and Kovrig.

The 12 senators are mostly Conservatives but some were appointed on the advice of Liberal prime ministers, including Trudeau.

In a letter, the senators said they want the government to use legislation, known as the Sergei Magnitsky Law, that allows it to target the personal finances of foreign officials responsible for violating human rights, freezing assets that are in Canada's control and forbidding Canadian institutions to do business with them.

But another senator is pushing the government from the other direction. Sen. Yuen Pau Woo, leader of the Independent Senators Group, is urging the government to follow the advice of Rock and Arbour, who argue that Canada's Extradition Act specifically allows the justice minister to terminate extradition proceedings at any time.

Trudeau and his justice minister, David Lametti, have maintained the minister may intervene only after a court has ruled on the Meng case and that, in the meantime, the rule of law requires that they not interfere in the matter.

Chretien, who cultivated good relations with China during his time in office and who has spent considerable time there on business since retiring in 2003, has indicated he would be willing to serve as a special envoy to China to secure the release of the two Michaels.

Mulroney first floated that idea last year, suggesting a delegation involving Chretien and his son-in-law, Andre Desmarais, who is honorary chair of the Canada-China Business Council.

Chretien's former deputy prime minister, John Manley, has argued Canada should never have agreed to arrest Meng on behalf of the U.S. And Chretien's former principal secretary, Eddie Goldenberg, earlier this year urged the government to conduct a prisoner swap, freeing Meng in return for the release Spavor and Kovrig.

China itself said releasing Meng could be one way to resolve the issue.

"Such options are within the rule of law and could open up space for resolution to the situation of the two Canadians," Zhao Lijian, the spokesman for China's foreign ministry, said in a media briefing Wednesday.

The involvement of the Chretien-era old guard has sparked criticism in some quarters that it is aimed primarily at advancing business interests in China.

But Rock, now a law professor at the University of Ottawa, said neither he nor Arbour has business ties and neither has anything to gain by advocating for the release of Meng.

Their intervention is based entirely on the fact that Section 23(3) of Extradition Act explicitly spells out that the justice minister "may at any time withdraw the authority to proceed" with an extradition, at which point the court would have to drop the proceedings, he said.

The government's contention that it must not interfere in the Meng case is "wrong," Rock, a former justice minister, said.

Rock was in cabinet when the Extradition Act was revised and he said Sec. 23 was specifically inserted because it was recognized "there are going to be cases in which the government will conclude that it's not in Canada's best interests to continue with an extradition once launched."

Rock said the government has preempted any discussion about the merits of releasing Meng by insisting that it can't do so, relying on "formulaic, robotic incantations" about having to respect the rule of law.

He and Arbour want there to be at least an honest debate about whether releasing Meng would amount to caving in to a bully and rewarding China for hostage diplomacy or whether it would anger the Americans and risk retaliation from the mercurial President Donald Trump.

For their part, Rock said they've concluded "there are compelling reasons to stop this." Meng's case could drag on for years while the two Michaels remain in prison, facing a "show trial" for espionage "in a court that has a 99 per cent conviction rate."

All the while, Rock said Canada's foreign policy is being held hostage, with the government stalling a decision on the use of Huawei technology in 5G networks and soft-peddling criticism of China's human rights record for fear of worsening conditions for the detained Canadians.

As for angering Trump, he said the president's suggestion that he'd drop extradition proceedings against Meng if he got a good trade deal with China, shows that Canada is "paying a disproportionate price for his cynical gamesmanship."

In a statement Wednesday, Lametti's office argued that the extradition process "ensures that individual rights are protected and that those sought for extradition are afforded due process before the courts, while honouring our international treaty obligations.

"We are well aware of the laws and processes governing this important regime," it said, adding it would not be appropriate to comment further on a case before the courts.

There are always appeasers

There are always appeasers who think that knuckling under will ease the pressure applied by bully behavior. It doesn't work in the school yard and it doesn't work in on the world stage. People that go to China, or other such nations take a great personal risk that they will become pawns in some political dispute, and that's their personal risk to take and be responsible for. It's not fair, but little in this world is. People who are eager to get on a plane and go there to do good, make money, or sight-see should wake up and smell the coffee.
Who says China will actually release the two Michaels if Wanzhou is released? Only the naive would believe that. What China would do is 'say' they will be released.....in due course, but first various charges have to be reviewed, yada yada yada, and the whole process will be dragged out interminably. In the meantime, China will continue to hold them to stifle hostile voices in Canada calling for action regarding Hong Kong. So, what will the appeasers what to give away next?
And who says dumping the rule of law and releasing Wanzhou will allow Canada to normalize its foreign policy relations with China? News flash people.....we've been experiencing normalized foreign relations with China all along. We will continue to exist in the middle of bad relations, hostage situations, intolerable human rights abuses. This is normal for China.
And Canada can forget advantageous trade with China. Trade with China is never going to be advantageous to Canada since it is not big enough to fight for fair dealings with this bully, and does not want to loose basic sovereignty in the process. When you look at the provisions of the trade agreement Harper was going to sign, you will see what sort of loss of sovereignty China demands.
In short, China will continue to be a source of trouble, not trade for the foreseeable future. A reasonable foreign policy with respect of China would be to keep clear of them wherever possible. Do not get mixed up in international trade fights between China and the US. Do not become restricted by trade deals. And finally, if, having broken the above rules and got into a situation, never, never give in to bullying. You deal with bullies by talking their own language. Let's hear a little discussion from the experts along those lines, and less baloney from the appeasers.

the slippery slope argument is always trotted out (by right-wingers) as a reason not to do the right thing under their nose. ...."but what if in the future......"
Who cares if T gets mad! Looking at him wrong gets him mad! How does that look as a foreign policy. What a joke.
If rewarding bully behaviour is your guidepost , by all means free Meung since the king of global bullies is Mr T. rump. How can anyone think we didnt arrest Meung to please the bully down south.

There is no rule of law anymore. Do what's best at this moment for Canadian citizens. That would be novel for Canada ! The dirty secret, past the sanctimonious rhetoric, is that most countries pay for hostage release. Grow up Canada
Our current position on Meung is weak, looks weak, highlights us as a vassal province to the Amerikan Empire. And the rest of the world sees it clearly.