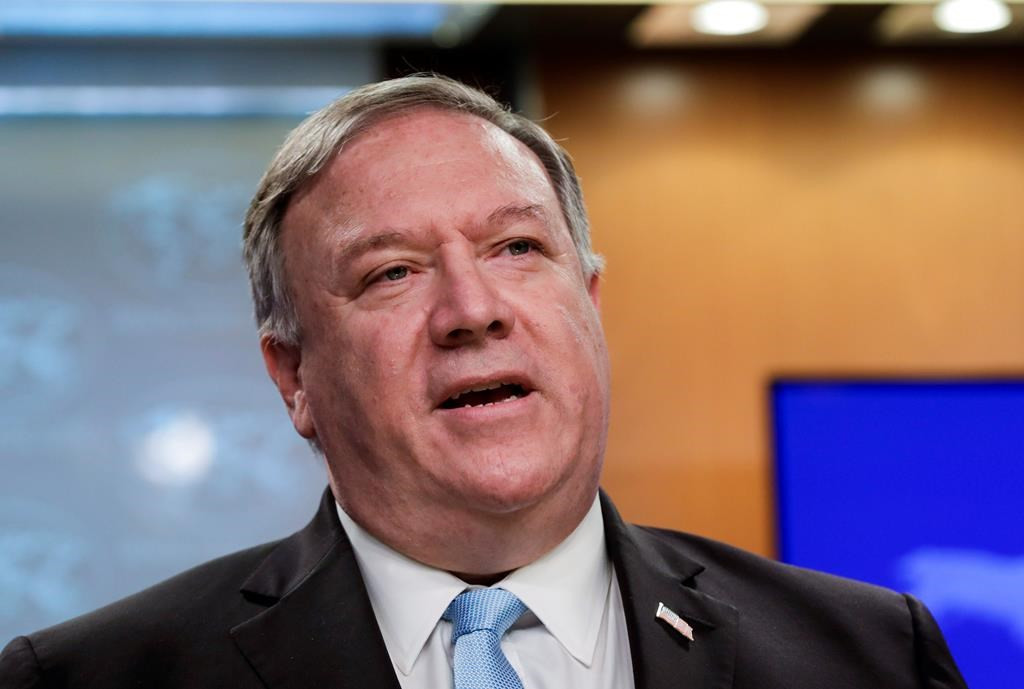 In this June 11, 2020, file photo, Secretary of State Mike Pompeo speaks at the State Department in Washington. File photo by The Associated Press/Yuri Gripas/Pool via AP
Previous story
Next story

Prime Minister Justin Trudeau says Chinese officials made clear in the days following the arrests of Michael Kovrig and Michael Spavor that their imprisonments were linked with Canada's having detained high-tech scion Meng Wanzhou days earlier.

Trudeau was rebutting a spokesman for China's foreign ministry who said earlier Monday that his country does not arbitrarily detain people, and that Trudeau's earlier remarks linking the cases were "irresponsible."

Trudeau doubled down, saying Chinese officials highlighted an "obvious link" between the arrests of the two Canadians and the RCMP's arrest of Meng at the Vancouver airport in response to an extradition request from the United States. Meng was arrested on Dec. 1, 2018 and Kovrig and Spavor were taken into custody nine days later.

"They made those links from the very beginning, and continue to put political pressure on Canada through that detention," Trudeau said Monday.

"It has been obvious from the beginning that this was a political decision made by the Chinese government, and we deplore it, and have from the very beginning."

Trudeau thanked allies, including the United States, that have criticized China for "using arbitrary detentions as a means to political ends." He said Canada and its allies "around the world" remain united against this Chinese practice.

The European Union said its leadership also raised its concerns over "the continued arbitrary detention" of Kovrig and Spavor during a virtual bilateral summit with China Monday.

Trudeau also had a call with Ursula von der Leyen, president of the European Commission on Monday. A summary of their conversation provided by the Prime Minister's Office said Trudeau thanked her for the EU's "expressions of concern" for the two Canadians.

Chinese authorities announced the charges against Kovrig and Spavor on Friday, after the two had spent more than 550 days in prison without access to lawyers or family.

Prime Minister Justin Trudeau says Chinese officials made clear in the days following the arrests of Michael Kovrig and Michael Spavor that their imprisonments were linked with Canada's having detained high-tech scion Meng Wanzhou days earlier.

Trudeau rejected suggestions that Canada should intervene to resolve the Meng case in an attempt to free Kovrig and Spavor.

"We continue to stand up both for the independence of our judicial system and Canadian interests and values," the prime minister said. "We work behind the scenes and in public to ensure that everyone understands we will continue to work extremely hard to get these Canadians home."

Garnett Genuis, the Conservative critic on Canada-China Relations, was critical of former Liberal cabinet minister John Manley and Eddie Goldenberg, a former aide to ex-prime minister Jean Chretien, for advocating for a prisoner exchange to free Kovrig and Spavor.

"Conservatives continue to call on Justin Trudeau to respect the independence of Canada's judicial system and reject this position by senior Liberal insiders," said Genuis.

Pompeo said the U.S. is deeply concerned by China's decision to formally charge Kovrig and Spavor.

"These charges are politically motivated and completely groundless. The United States stands with Canada in calling on Beijing for the immediate release of the two men and rejects the use of these unjustified detentions to coerce Canada," Pompeo said in a statement on Monday.

"Additionally, we echo Canada's call for immediate consular access to its two citizens, in accordance with the Vienna Convention on Consular Relations, as China has prohibited such access for almost six months, and the world has no knowledge of the two Canadians' condition."

Meng, the chief financial officer of Huawei Technologies, is living in a luxury Vancouver home while her extradition case wends its way through a British Columbia court.

The United States wants to prosecute Meng for fraud, alleging she lied to banks about her company's connections with Iran, which could possibly violate U.S. sanctions.

Last month, the B.C. Supreme Court judge ruled the allegations against Meng could constitute a crime in Canada, which is necessary for an extradition. That meant Meng's case remains before the court, unresolved.

Last week, Meng's lawyers accused the Americans of misleading the B.C. court and said they are seeking a stay in the proceedings.

Trudeau has made stronger

Trudeau has made stronger statements of late. The Prime Ministers overall attitude towards China expressed in previous comments makes it very difficult for him to appear serious in his statements. Begs to question why China will take him seriously since he expressed some admiration for the Chinese dictatorship in the past. I believe his overall response has been to weak from the start.

I'm wondering how Meng Wanzhou can sleep with a clear conscience, knowing that she is living in the lap of luxury in her Vancouver mansion while the two Michaels have been languishing in a Chinese prison for 18 months. It's hard to believe such terrible human rights abuses can exist in the 21st century. Beware Canadians and Canada of the Chinese government. I wish our economies weren't so tied together. Now it seems that they can bully us whenever they want.

It is not fair to anyone to

It is not fair to anyone to be detained indefinitely; at the present rate Meng could be detained for decades while the case proceeds and then for several rounds of appeals. She should be released on bail and a promise to appear in court when requested. If she skips she will be severely restricted in her travels to countries without an extradition agreement with Canada or the USA, and will jeopardize the chances of anyone being given bail in future similar cases.