Lead battery recycling is a global health hazard. Why have so few people heard of it? 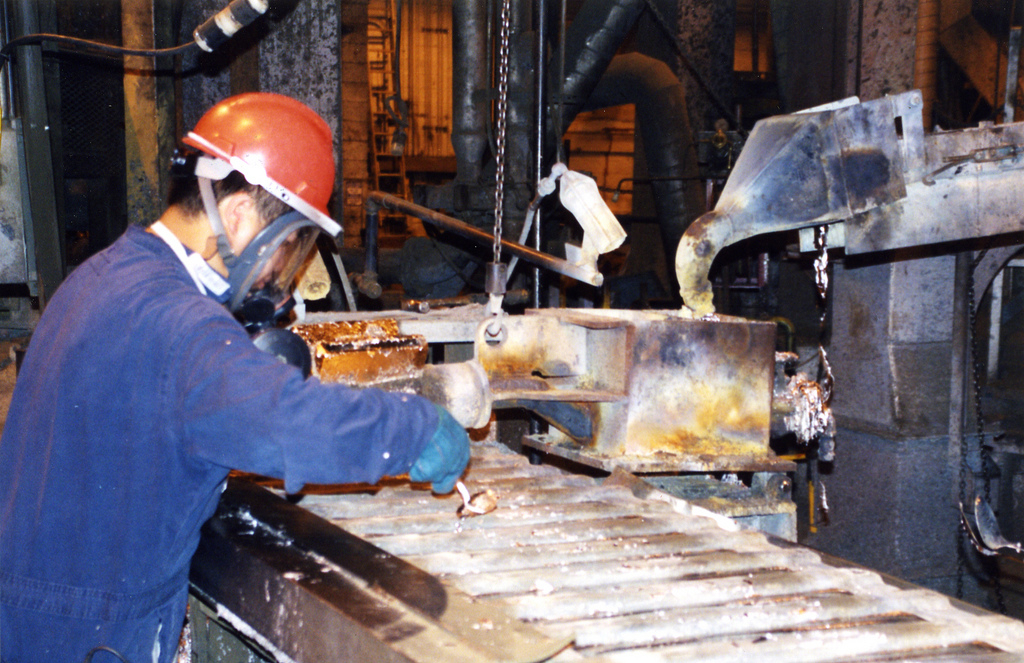 This article was originally published by Yale Environment 360 and appears here as part of Canada's National Observer's collaboration with Climate Desk.

Phyllis Omido thought her baby son had malaria — until doctors discovered he was being poisoned by her breast milk, which contained dangerous levels of lead emitted by a battery recycling plant close to her home in Mombasa, Kenya. She quit her job at the plant and launched a campaign that eventually shut it down.

On the other side of Africa, in Senegal, at least 18 children died in just three months from encephalopathy — toxic lead pollution from a battery recycling plant in a suburb of Dakar had damaged their brains. The ground around the plant was so contaminated that residents were collecting the soil in their homes to sieve out the lead for sale. Hundreds more children in the neighborhood were poisoned.

In California last month, the state auditor reported that thousands of homes, along with schools and parks, in a 3.4-mile-wide zone around a former battery recycling factory near Los Angeles remained contaminated, because of delays in a $650-million cleanup that the now-bankrupt former factory owner, Exide Technologies, will not fund.

And as U.S. environmental rules governing lead recycling plants have tightened, nearly half a million tons of American car batteries have in recent years been trucked south annually, for recycling in often dangerous and poorly controlled smelters in Mexico.

From Vietnamese villages to the backstreets of Chinese megacities, from Roma camps in Kosovo to workshops in the shantytowns of Africa, from forest clearings in Bangladesh to giant smelters in India, the unsafe recycling of lead batteries, mostly from automobiles, is a lethal and growing scar on the planet.

Perry Gottesfeld of Occupational Knowledge International, a San Francisco-based organization that campaigns worldwide against industrial pollution, calls it “the most serious environmental health threat to children.”

But somehow the epidemic of poisoning from this hugely profitable business is rarely seen as a global scandal. Most people have never heard of it.

The automobile industry had appeared to have purged lead from its environmental CV with the almost-total elimination in recent decades of lead additives in gasoline. In the aftermath, blood-lead levels in hundreds of millions of people across the world fell, often dramatically.

But now, those levels are rising again, says Richard Fuller, CEO of Pure Earth, a New York-based nonprofit, in large part because nobody thought about lead in automobile batteries, even though they start almost all of the 1.4 billion vehicles on the road today.

A third of the world’s children are being poisoned by lead, from recycled batteries and other sources, according to a recent study by UNICEF and Pure Earth. #recycling #leadpoisoning

We tend to think of recycling as an unalloyed good thing. But not the way it is done with lead in batteries. Lead, one of the most ubiquitous and poisonous metals, is also among the most recycled, with more than six million tons of it collected for reuse each year. Lead batteries are “the world’s most recycled consumer product,” according to the International Lead Association, a London-based trade body. Thanks to recycling, we barely mine lead any more.

An estimated 85 per cent of lead in use today goes into batteries, mostly for automobiles. And when the batteries run down, 99 per cent of this lead is recycled to make new batteries. The business is so universal because, unlike e-waste, for instance, it is very profitable.

But therein lies a problem. Lots of people want a slice of the action. Tens of thousands of backyard battery breakers and smelting enterprises around the world are seeking to cash in, collecting an abundant supply of used batteries to turn into new product. With little regulation, the result is often lethal.

In many countries, small-time operators outcompete the legitimate industry, because their low costs mean they can pay more to buy used batteries. Up to half of all batteries end up in the informal economy, “where unregulated and often illegal recycling operations break open battery cases, spilling acid and lead dust onto the ground, and smelt lead in open-air furnaces that spew toxic fumes and dust that contaminate surrounding neighborhoods,” according to a report published in July by Pure Earth and UNICEF, the UN children’s agency.

But parts of the formal legal sector are scarcely better, says Gottesfeld, with plants that “are fewer but bigger.” The former Exide plant in California is a case in point. Across the border, a giant smelter in the Mexican city of Torreon has a history of contaminating the blood of children in the neighbourhood that stretches back half a century.

Plumes of pollution in air, soils and water have long been documented around lead recycling and smelting works large and small. Doctors know that lead is readily breathed in or ingested. It enters the bloodstream, which delivers it efficiently to organs from the gastrointestinal system to the brain.

We know, too, that the lead is a potent neurotoxin. There is no known safe level. Besides causing fevers and gastrointestinal problems, it damages the intellectual development of young children even at low levels, reducing IQ and attention span, as well as causing mood disorders. It has been suggested as an important trigger for violent behavior in communities across the United States and elsewhere. Some point to how crime levels dropped in many cities as lead was removed from gasoline.

“Lead wreaks its havoc silently and insidiously,” the UNICEF report noted. The study’s most stunning statistic was that a third of the world’s children are being poisoned by lead, from recycled batteries and other sources. Put another way, around 800 million children live with levels of lead in their blood above the five micrograms per decilitre safety standard set by the U.S. Centers for Disease Control and Prevention.

Some experts, including Gottesfeld, say the UNICEF estimate is unsubstantiated. But he concedes it is “consistent with the blood-lead data we see around the world.”

Gottesfeld sees a global industry growing fast and largely unregulated. “I started investigating this years ago in India,” he says. “But as fast as we tried to clean up there, we found the same Indian companies moving to Africa.”

With African economies booming, more than 800,000 tons of lead is removed from batteries each year across the continent.

The consequences for human health and the environment are beginning to emerge. A seven-nation study of the continent that Gottesfeld helped compile two years ago found widespread lead contamination of soil around recycling plants in dense urban slums and close to schools in cities such as Dar es Salaam in Tanzania, Lagos in Nigeria and the port of Tema in Ghana.

Lead levels in contaminated soils averaged 23,200 parts per million — 1,000 times natural levels and roughly 100 times U.S. safety levels for soil. The soil was two per cent lead, with peaks at 14 per cent.

Africa is facing an especially severe lead poisoning problem. “But so far,” writes Faridah Were of the University of Nairobi, a co-author of the Gottesfeld paper, “despite the urgent need… there has been minimal effort by African governments.”

Southeast Asia faces a similar crisis. Bill Daniell of the University of Washington School of Public Health, was lead author of a 2015 study of childhood lead exposure around Dong Mai, a Vietnamese village near Hanoi, where households specialized in recycling lead batteries. More than 100 children in the village were tested. They all showed high levels of lead in their blood, with more than a quarter above 45 micrograms per decilitre, or nine times the U.S. safety limit.

In China, Occupational Knowledge International has documented a rash of scandals around lead recycling and smelting plants over the last two decades. Yale Environment 360 reported in 2010 how more than 100 children were treated in hospitals in Chongqing for lead poisoning caused by pollution from the city’s large lead smelting plant. Angry parents surrounded the plant, ransacked its offices and destroyed machinery, forcing the plant’s closure.

China is now cleaning up, says Gottesfeld. “Hundreds of plants have been shut down.”

But he says India is not taking action. Its regulations are weak, and there is poor enforcement.

“Companies are supposed to take back 80 per cent of batteries,” he says, “but there is no financial incentive, so it doesn’t happen.”

Instead, small-time dealers and scrap merchants rule. A study published last year by Toxics Link, a New Delhi-based NGO, found that about 90 per cent of lead batteries in India ended up recycled by the informal sector. The study mapped neighborhoods in major cities, such as Delhi, where workshops recycling lead batteries operate apparently with no official oversight.

Global demand for lead has grown ten-fold in a decade “mostly linked to the battery industry,” says Daniell. The main cause of the soaring problem is the rapid increase in number of automobiles around the world. But a disturbing new problem has arisen because of the rapid growth of renewable energy, which requires batteries to capture and store energy when the sun is shining or the wind blowing.

Domestic solar panels in remote rural areas may be a particular problem.

“This is promoted by UN agencies and climate change activists,” he says, “but nobody is providing ways of collecting the batteries for safe recycling.”

So what can be done? Gottesfeld says UN agencies such as UNICEF and the UN Environment Program have highlighted the issue without addressing it effectively. Daniell agrees, noting there is “a fair amount of published research, and endless discussion, but that has not translated well to definitive action or effective policy.”

Fuller at Pure Earth says persuading policymakers will be “a slow process.” He wants to establish a global fund to help governments provide cash for the collection of batteries by the formal sector, as a way of side-lining the backstreet operators. He highlights success in Brazil, “which shut 80 per cent of its informal sector,” mainly through economic incentives.

Some major firms say they want to help. Industry superpower Clarios, which makes a third of the world’s automobile batteries, recently began funding efforts by UNICEF and Pure Earth to lobby for a global cleanup.

But others hold out. The India Lead Zinc Development Association dismissed the well-researched and sober-minded Toxics Link study as “exaggerated and totally flawed.”

But even with a tightening of operating standards, there will remain a huge legacy of contaminated sites. Worldwide, Fuller believes there could be up to 90,000 informal recycling plants currently operating, most poisoning the environment and people. “But we don’t know. The more you look, the more you find.”

And there are many more contaminated sites than plants.

“The plants keep on moving,” says Fuller. He studied Bangladesh, where there are hundreds of informal companies, often breaking batteries and smelting their lead on vacant land. “They keep getting chased off by the locals, but just move elsewhere, leaving behind thousands of contaminated sites.”

Even where investment has gone into cleanup, the outcome can be uncertain, says Fuller. A lot of money was spent to purge poisoned soil from the area around the Senegal site where 18 children died.

“We put all the soil down an abandoned mine,” he says. “But a local politician said it would poison his people. He dug it up and put it on the roadside. Now we have to dispose of it all over again.”

Still, there is hope. In July this year, Omido and her fellow Kenyan campaigners won a major victory in the courts against the Kenyan government and the two metal refining companies that operated in Mombasa. The judges awarded $12 million in compensation for deaths and health impacts from the Mombasa battery recycling plant — and ordered a cleanup. It is a start.

Industrial pollution is in your blood. A court action calls that battery