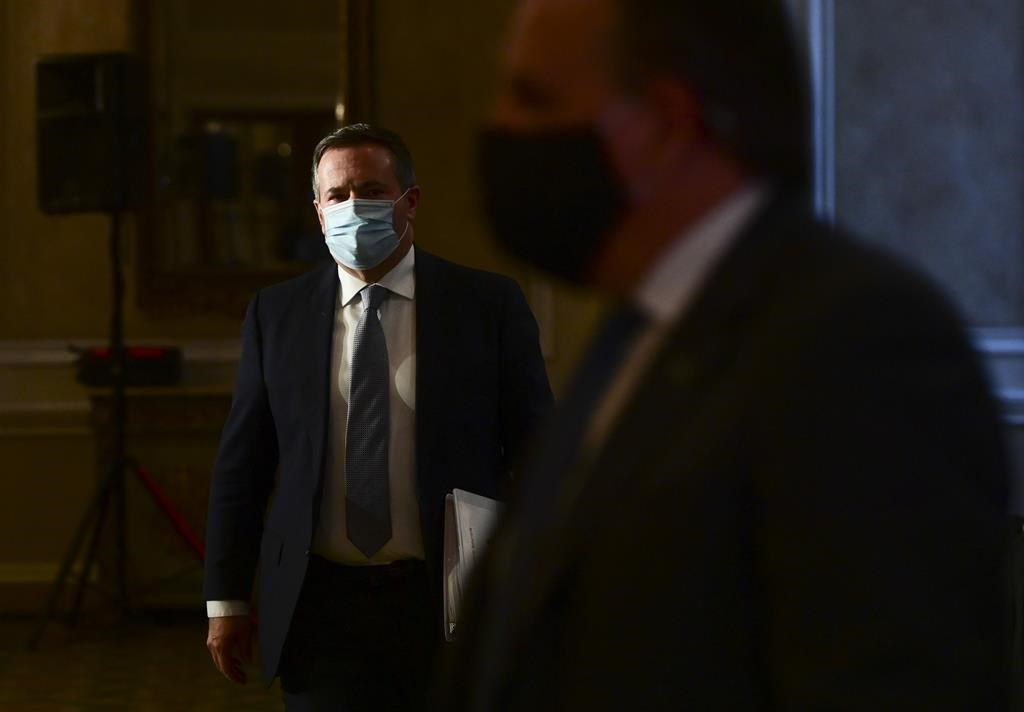 He said the goal is to slash the rate of infections and keep people alive while preventing the loss of jobs and livelihoods that threaten to make an already dire situation even worse.

“This whole thing is just incredibly tough for everyone,” Kenney said Tuesday.

“I just never imagined I’d be in this place in public life where I was telling people who could come visit them at home.

“We really just felt we had no option given that 40 per cent of traceable cases connect back to private social activity.”

Indoor gatherings are banned immediately, but people who live alone can have two personal contacts they are allowed to meet up with.

Outdoor social gatherings are limited to 10 people, as are funerals and weddings.

Kenney said the government is still working out how officers will enforce the gathering ban, but said there will be not be a “snitch line” for people to report on their neighbours.

“(Officers) will be able to write tickets for fines of up to $1,000 per individual who is violating these rules against indoor social activities."

"They will be able to see if there are obvious signs of a large gathering, a lot of cars parked outside somebody’s house, for example," Kenney said.

Starting Friday, businesses will remain open at reduced capacity or by appointment only.

And children in grades 7 through 12 will move to at-home learning at the end of the month and other students will follow after Dec. 18.

The orders will be reviewed in three weeks.

Dr. Deena Hinshaw, Alberta’s chief medical officer of health, reported 1,115 new cases on Tuesday — the sixth consecutive day with numbers above the 1,100 mark. There were 348 patients in hospital, 66 of them in intensive care. Sixteen more people died, bringing that total to 492.

A day earlier, Hinshaw compared the COVID-19 situation in Alberta to a snowball rolling down a hill, growing in size and speed.

Lives and livelihoods have been the crux of the debate in Alberta. Kenney has maintained that the best approach is targeted health restrictions to keep COVID-19 from overrunning the health-care system while keeping the economy from collapsing.

Others, including many physicians, infectious disease specialists and the Opposition NDP, have called for sharp, short economic lockdowns, arguing that if the COVID-19 wave isn't stopped, there won’t be an economy left to save.

Kenney’s decisions were made after Hinshaw made new undisclosed recommendations Monday to the cabinet subcommittee directing COVID-19 decisions.

NDP Leader Rachel Notley called the new restrictions “half-measures” and said they were likely the result of political bargaining instead of advice from public health officials.

“We cannot know, unfortunately, exactly what Dr. Hinshaw recommended to this UCP cabinet. But I do not for one second believe it was this,” she said.

Mike Parker, head of the Health Sciences Association of Alberta, a union representing paramedics and other health professionals, said Kenney tried to find the middle ground and failed.

“(Kenney) continues to put business interests ahead of the well-being of Albertans.”

Jason Schilling, head of the Alberta Teachers’ Association, said the groups supports the move "to move to a combination of in-school and at-home learning that will allow schooling to continue in a safer environment."

This is the second time Kenney's government has imposed sweeping rules to combat COVID-19.

The province shut down many retail businesses, restaurants, recreation centres and schools during the first wave in March. Most were allowed to reopen in May and June with restrictions. Schools opened again in the fall.

In recent weeks, the province has limited public gatherings in areas including Edmonton and Calgary and forced bars and restaurants to stop serving booze by 10 p.m. and to close by 11 p.m.

Indoor group fitness and team sports, along with group singing and arts performances, are also banned in several large cities.