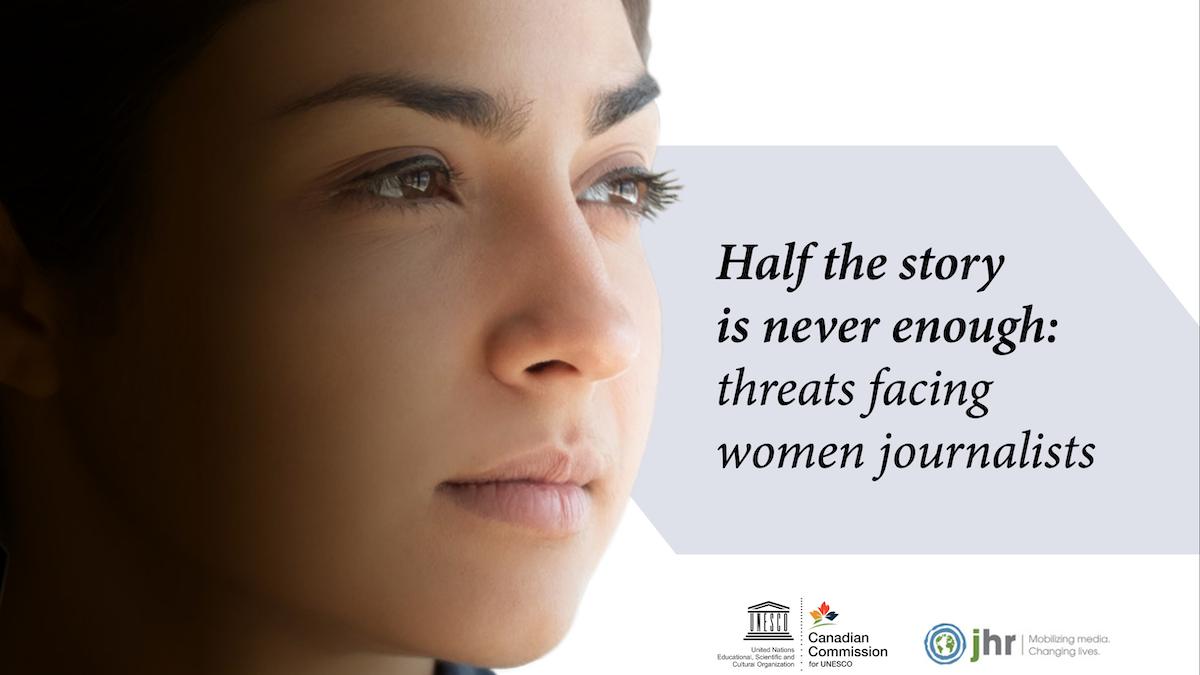 It’s a journalist’s job to speak truth to power and afflict the comfortable.

No one wants to hear that we’ve failed at our job. Or failed people we care about.

But I need you to listen.

Larissa Burnouf first heard about missing and murdered Indigenous women from other reporters.

Reporters censor these stories out of self-preservation. We hide the vicarious trauma. We sanitize details when we write. We make them fit to print.

Reality hits, as it did for Larissa when she got her first assignment. In a courtroom, where a violent death was described one brutal detail at a time, Larissa first understood the hate and cruelty behind the crime. Meeting the family, watching their pain, taught Larissa that loss makes your chest feel hollow.

“I remember coming home and crying ... How do you disassociate yourself? How do you not connect yourself to that family, when they are in the most traumatic painful experience of their life, and they are telling you about their pain?” she asks.

Larissa then reminds me of how many murders she covered. There were child deaths, too. So many.

Indigenous women in the media business face a double burden of discrimination plus the trauma of the stories they cover, @karyn_pugliese writes. #humanrights #reconciliation #Indigenousrights

Larissa speaks unfalteringly, with a strong, steady voice. Perhaps a trick she learned from years on television.

But I notice she has started rocking herself. I don’t think she realizes she is doing this.

Larissa left journalism. She’s about to become a lawyer, and she plans to go back and help those families in ways she couldn’t as a reporter. Knowing Larissa, I am certain she’ll be brilliant.

But here is a fair question: shouldn’t her boss, the one who assigned these stories, have supported her?

I was her boss. And yes, I should have.

As she’s speaking, I am tempted to interrupt, say "Yeah, but." I want to defend myself by reminding Larissa of things I did — or thought I did — to help.

Only my "yeah, buts" are meaningless to Larissa.

Whatever I imagined I was doing to support her, it was not enough, not the right thing. It didn’t help.

And she is not blaming me. Larissa only wants the media industry to do better for Indigenous women.

The Canadian Commission for UNESCO (CCUNESCO), World Press Freedom Canada and Journalists for Human Rights asked me to contribute to their report “Half the story is never enough: Threats facing women journalists.”

For many Indigenous women in the industry today, their story starts with the 1996 Royal Commission on Aboriginal Peoples. RCAP called out the news media for stereotyping Indigenous people into noble environmentalists, angry warriors or pitiful victims. It failed to show our full humanity. Almost 20 years later, the Truth and Reconciliation Commission pointed out how little had changed.

In those 20 years in between, dozens of Indigenous women entered the field. The change they might have made fell short of their talent and abilities.

On the job, they experienced racism. When they pulled out cameras, passersby cat-called them “dirty squaw,” co-workers mocked their accents or called them token diversity hires. Some faced sexual harassment or violence. They were told to “suck it up.” They pushed back against an implicit editorial bias that imagines news as a conversation between white people.

For their efforts, they were labelled as difficult. Then they hit a glass ceiling.

It shouldn't surprise anyone that a journalism degree doesn’t shield Indigenous women from the higher rates of violence and assault faced by other Indigenous women. Nor that newsrooms are not immune to systemic racism and gender discrimination.

Terri Monture, a CMG union representative and Mohawk woman, has handled employee relations for more than 10 years at a number of media outlets. She confirms the issues described by the 15 women in this case study are illustrative and found throughout the industry.

“There’s an immediate skepticism with Indigenous women in a way that the men don’t encounter ... when you look in Canadian settler terms and how they think, Indigenous women don’t have a voice. They’ve never heard our voices throughout their history,” Monture says.

This report is not a name-and-shame — in fact, I am the only manager who is identifiable and openly critiqued in the report.

The news industry’s job is to shine light in dark places.

When the spotlight illuminates our own shortcomings, we mustn’t look away.

Most newsrooms in Canada have failed to create a place where Indigenous women feel valued for who they are or the work they are trying to do. It’s why, even after years of service and awards, many walk away feeling empty.

We need to do better.

The universal cake of

The universal cake of misogyny iced with racism. What an egregiously ugly pattern of human behaviour. People everywhere vitriolically reject truths that highlight their despicable speech and actions. When these truths are delivered by women it simply adds fuel to the rage because females are supposed to be silent.

Well, it appears that silence, idleness, suppression, gross bodily harm will no longer be suffered in a vacuum. The world better prepare for the too long delayed roar of outrage.