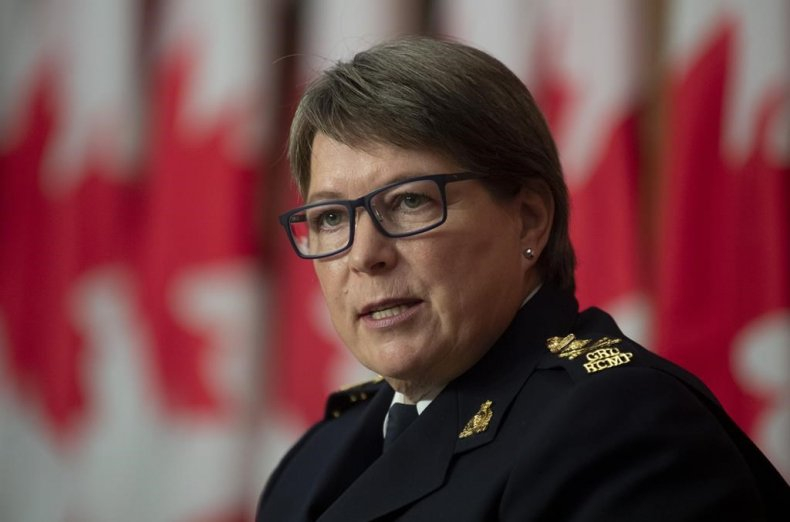 The Mounties fiddled while the Mi’kmaq fisheries burned.

That viral video of RCMP officers idly watching arson at lobster pounds convinced National Chief of the Assembly of First Nations Perry Bellegarde to disrupt his normally conflict-averse Twitter feed with a public call for the resignation of RCMP Commissioner Brenda Lucki.

Bellegarde called it a year of “civil unrest,” which, he says, included racist attacks on Mi’kmaq fishermen on the East Coast, RCMP raids in Wet’suwet’en territory and an officer needlessly tackling and punching Chief Allan Adam in the West, and an Inuk man purposely smacked to the ground by the door of a moving police cruiser in the North.

When she was appointed in 2018, Lucki was given a mandate to advance reconciliation with Indigenous Peoples, promote gender equality, address workplace harassment and protect the civil liberties of Canadians.

Bellegarde clearly doesn’t think the RCMP is hitting the note on reconciliation.

The B.C. Civil Liberties Association isn’t happy with her record, either. Earlier this year, the group filed a formal complaint about the RCMP’s use of so-called "exclusion zones," wide swatches of areas where officers claim extraordinary powers to detain, search and arrest people.

As it turned out, the Civilian Review and Complaints Commission (CRCC), which oversees the RCMP, had already warned the force it was operating beyond its powers. Apparently, the RCMP decided to ignore that caution.

And full disclosure as a press freedom advocate: I have personally used up the goodwill of a half-dozen pro-bono lawyers and drained about a litre of ink since January trying to keep the RCMP from harassing, illegally detaining or unlawfully arresting journalists.

Prime Minister Justin Trudeau and Public Safety Minister Bill Blair are so far defending Lucki, saying she has the right vision and just needs more time to change the culture at the RCMP. After all, change doesn’t happen overnight.

It will take more than increased civilian oversight or body cameras to fix the #RCMP — it's time to reimagine the force, writes @NatObserver columnist @karyn_pugliese. #reconciliation #cdnpoli

In 2017, the CRCC issued a report panning the force for a long-standing and deeply rooted culture of harassment and workplace bullying. It described the culture as “toxic,” and suggested investigations were being impacted and the public trust eroded.

The report describes an internal structure that protects toxic behaviour such as bullying, gender and racial discrimination, one that encourages good cops to keep their heads down and punishes whistleblowers.

Although problems had been apparent for more than a decade, the CRCC said RCMP leadership resisted change and had largely ignored its past recommendations.

Shortly after that, Commissioner Bob Paulson apologized to thousands of female officers and civilians who had been sexually assaulted or harassed by members of the force.

Victims were compensated, but there was no public reckoning for the perpetrators. The public was only told a small but “potent minority” of men were responsible. How many men were involved in the harassment or assault of more than 3,000 women, what discipline they faced and whether they are still active on the force was not made public.

And one could go back further, in RCMP history, a national inquiry panned the RCMP for its handling of investigations into missing and murdered Indigenous women and girls, numerous cases of excessive force, a number of incidents where the RCMP overstepped their legal powers and the killing of Inuit sled dogs. At its base, the RCMP was set up to force Indigenous people off their lands and enforce the residential school system even when it meant tearing children out of the arms of mothers. This is by no means a complete list.

So, in 2018, when Lucki, a 31-year veteran of the force, walked into the top job and accepted the mandate, her eyes should have been wide open to the issues.

But when she was recently asked if racism was systemic, she fumbled, finally stating that it is an individual issue. Essentially, Lucki is saying she believes she has a few bad apples.

The truth is toxic behaviour is rarely a solo act. Bad apples grow in an environment that nurtures them, excuses their behaviour and protects them.

Consider this: shortly after Colten Boushie, a 22-year-old Cree youth, was shot in the back of the head, an RCMP officer wrote the following in a Facebook group: “Too bad the kid died but he got what he deserved ... How many of us work on or near reserves and are getting fed up with the race card being used every time someone gets caught breaking the law?”

Lucki refused to make the officer’s name public for privacy reasons, which is standard for the RCMP. The officer was disciplined on the "lower level" of the force’s disciplinary spectrum, which Lucki described as some form of reconciliation with the Indigenous community. Otherwise, the officer’s position on the force was not impacted. In an interview with APTN News, Lucki called the officer’s behaviour unacceptable.

But the more serious issue of having an officer who holds racist sentiments on the force went unaddressed.

They are anecdotal but point to a pattern repeated in case after case by the RCMP.

Lucki’s failure to see that pattern, to understand that the problem is not a few individuals but a system that has a deeply rooted toxic culture, is why she cannot fix the RCMP.

The city of Camden, N.J., faced a similar problem in 2013. Its violent-crime rate was out of control, the police force was considered incompetent at best, corrupt at worst. Attempts to fix the internal culture at the heart of the problem had failed.

So they scrapped the force.

The process was tough and controversial. The results are not perfect.

But few Camden residents would deny the new force is a vast improvement over the old one.

Removing Lucki and appointing a new commissioner will not fix the RCMP.

It will take more than increased civilian oversight or body cameras. Because anyone coming up through the ranks has already normalized an unacceptable culture.

It’s time to think about disbanding the RCMP and starting over.

Once again, we see that

Once again, we see that gender is not the problem in leadership.

Certainly a problem! Disbanding would raise the issue of where would one find replacements and better senior officers? We are all conditioned by our past. Education and revised goals and actions have to be learned and enforced. The onus is still on Parliament the PM of the day to set any agreed to change in motion. The present Force members are surely smart enough to adjust as needed to fulfil their defined task in our society. Always a few that are not and they can be dealt with appropriately.
Research findings, reported at length on the internet seems to confirm all sorts of changes in behavior will be needed if we as a species are to survive beyond the next couple of generations. Civic cohesion could be vital!

On where to find replacements

On where to find replacements, in Canada we do have multiple post-secondary education programs at the diploma and degree level that I imagine tens of thousands of young Canadians have passed through in the last five to seven years, with many thousands more currently enrolled. Some of those programs combine university, college, and on-the-job police training. My understanding is that those students who go on to be hired into police forces are often, to put it mildly, disillusioned at the workplace culture they find there. Old habits die hard. I am less optimistic than you are that change is possible in an existing work culture that at the very least tolerates racism and sexism in the ranks and that at its worst protects and enables it. The people I feel for are the "good" officers who know they'll be ostracized if they speak up. A lot of those "good" officers leave, or live with depression on the job. And, I feel that in some instances, the RCMP are on the front lines of absorbing centuries of bad policy on First Nations issues. For instance, the abysmal housing, water, food and basic medical care conditions on a lot of reserves has been a problem for how long now? Resolving those issues for good would go some way toward better relations overall, including between RCMP and Indigenous. In the meantime, those kinds of issues make everything worse, and basic trust between settlers and Indigenous a joke.

Thank you for this piece.

Thank you for this piece. Interesting perspective. I would like to see some coverage of Indigenous self-policing in Canada, if there is some of that here, as well as elsewhere and how that seems to be going in terms of working with regular police forces. In popular culture (police and crime series, etc.) different policy bodies are often portrayed as in competition with one another, fighting over turf. It would be a relief to hear a level of cooperation and collaboration is in place somewhere (beyond management talking points), especially in police work where race may be, or is, a factor.

I completely agree. That's why I wrote to the PM and 5 of his ministers and asked them to start diverting funds from the RCMP to Indigenous communities. I suggested that in time we can have an Indigenous Canadian Police (ICP) to completely replace them.

That was two weeks ago. I haven't received a reply yet. Perhaps they're still thinking it over? Ha ha.

Let's face it. An "attitude

Let's face it. An "attitude adjustment" is needed in large segments of the Canadian population with regard to racist issues. A lot of the attitude problems run deep beneath the surface and only erupt under conditions of stress or conflict.

This is a societal and political problem, and our social and political leadership needs to demonstrate and walk the talk to break down the xenophobia that lurks within (I would guess) 98% of us. Nor is it limited to the white colonial/settler population. Many of our more recent immigrants bring with them the prejudices and bigotry they learned in their birth countries.

We have used words like "mosaic" and "diversity" over the years without plumbing the depths of what is required to achieve an integrated social fabric in this nation.

The all too visible instances of prejudice and injustice that arise in our police and judicial ranks are there because they have been tolerated over the centuries, and because they reflect the underlying social and power construct in Canada.

In this case change has to happen - starting from the top down and working its way up from the bottom. Too many of the racist prejudices are grounded in and fostered by systemic impoverishment and enforced by economic and political power plays.

Can some of the First Nations

Can some of the First Nations pull together a proposed alternate law-enforcement and public-safety organization and present it for service?

The first police force, the London Metropolitan, was just assembled from untrained volunteers at the time; everybody has to start somewhere. If the RCMP did heed your call and disband tomorrow, whom would you gather to provide safety services on the First Nations?

This isn't some sarcastic rhetorical question meant to get a "no"; it's serious.