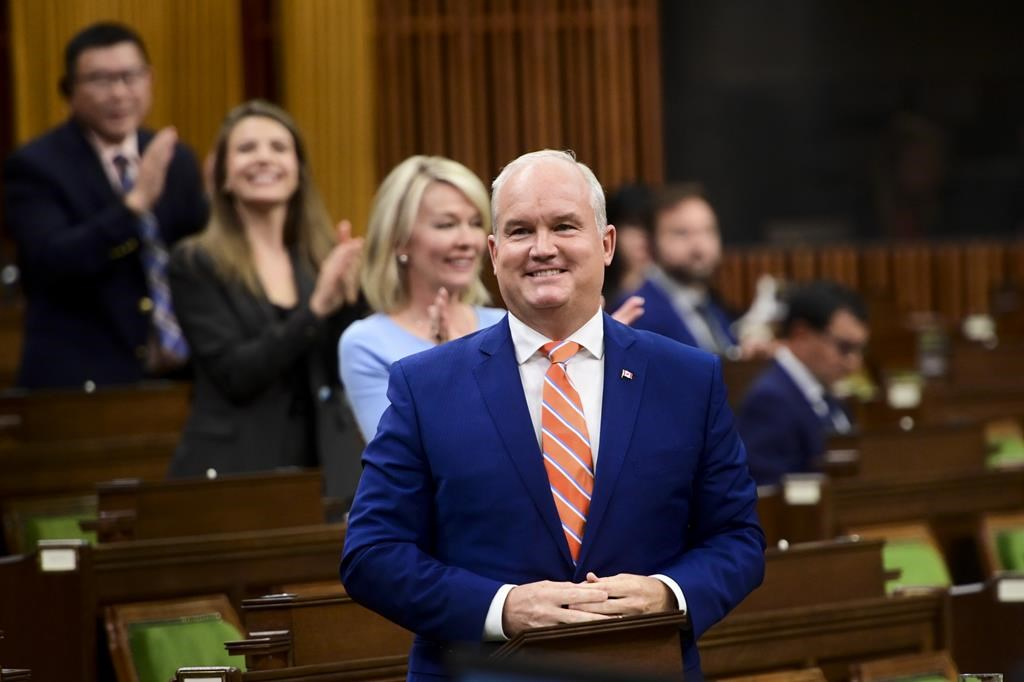 Conservative leader Erin O'Toole stands during question period in the House of Commons on Parliament Hill in Ottawa on Wednesday, Sept. 30, 2020. File photo by The Canadian Press/Sean Kilpatrick
Previous story
Next story

Conservative Leader Erin O'Toole accused the Liberal government Sunday of putting too much emphasis on partnering with a Chinese company for a COVID-19 vaccine in what turned out to be a failed deal.

O'Toole said the Trudeau government only turned its attention to pre-ordering tens of millions of vaccine doses from companies such as Pfizer and Moderna in August when its collaboration between the National Research Council and Chinese vaccine-maker CanSino finally collapsed after months of delays.

The Council had issued CanSino a licence to use a Canadian biological product as part of a COVID-19 vaccine. CanSino was supposed to provide samples of the vaccine for clinical trials at the Canadian Centre for Vaccinology at Dalhousie University, but the Chinese government blocked the shipments.

"I would not have put all our eggs in the basket of China," O'Toole said at a morning news conference.

"If you look at the timeline, that's when Canada started getting serious with Pfizer, Moderna, the other options," he added, saying he was concerned that "the Trudeau government was willing to almost double down on partnering with China" earlier in the pandemic.

The government announced its major vaccine purchases in August after it confirmed the CanSino partnership had fallen through. At the time, it said its decision had come after careful consultations with its vaccine task force of health experts.

The CanSino partnership with Dalhousie predated the deep freeze in Canada-China relations that occurred after the People's Republic imprisoned two Canadian men, Michael Kovrig and Michael Spavor, in apparent retaliation for the RCMP's arrest of Chinese high-tech executive Meng Wanzhou nearly two years ago on an American extradition warrant.

This past week, Prime Minister Justin Trudeau created a firestorm when he said Canadians will have to wait a bit to get vaccinated for COVID-19 because the first doses off the production lines will be used in the countries where they are made.

As questions grew about the CanSino deal, Trudeau continued to defend his government's vaccine procurement policy, which he says has secured multiple options for the country. Trudeau also appointed a Canadian Forces general to lead the logistics of an eventual vaccine rollout with the Public Health Agency of Canada.

The chairman of American vaccine maker Moderna told the CBC on Sunday that Canada is near the front of the line to receive 20 million doses of the COVID-19 vaccine it pre-ordered.

Noubar Afeyan was asked on CBC's Rosemary Barton Live whether the fact that Canada committed to pre-purchase its doses before other jurisdictions means it will get its supply first. Afeyan confirmed that was the case.

Conservative Leader Erin O'Toole accused the Liberal government on Nov. 29, 2020, of putting too much emphasis on partnering with a Chinese company for a #COVID19 #vaccine in what turned out to be a failed deal. #cdnpoli #Pfizer #Moderna #CanSino

"The people who are willing to move early on with even less proof of the efficacy have assured the amount of supply they were willing to sign up to," he said.

O'Toole said with Finance Minister Chrystia Freeland poised to deliver the government's long-awaited fiscal update on Monday, the Liberals need to do two things to spur economic recovery: offer a better plan on how it will rollout vaccines for Canadians and step up the distribution of rapid tests.

"There can't be a full economy, a growing economy, people working, people being productive without the tools to keep that happening in a pandemic. Those two tools are rapid tests, and a vaccine."

Freeland's fall economic statement is expected to give a full accounting of the government’s record spending on programs to combat the pandemic. In July, the deficit was forecast to be at a record $343.2 billion but some estimates say it could easily top $400 billion.

The government could announce new spending such as taking steps towards a national child-care system, and relief for battered industries such as travel and restaurants that will face an uphill struggle to recover from the pandemic.

NDP finance critic Peter Julien sent Freeland a three-page letter urging her to take action on a variety of fronts to help struggling Canadian families during the pandemic.

They included taking concrete action on establishing a national pharmacare plan to help Canadians pay for soaring prescription drug costs, and establish a national day-care strategy to help women who have been disproportionately hindered by the pandemic. Julien also urged Freeland to help Indigenous communities and abandon the government's plans to pay for the Trans-Mountain Pipeline and ramp up its fight against climate change.

Green party Leader Annamie Paul called on Freeland to deliver "a positive vision for a green recovery" to accelerate Canada's transition to a carbon-neutral economy.

"We are optimistic that a vaccine for COVID-19 will be widely available next year and so we must be prepared for what comes next," Paul said in a statement.