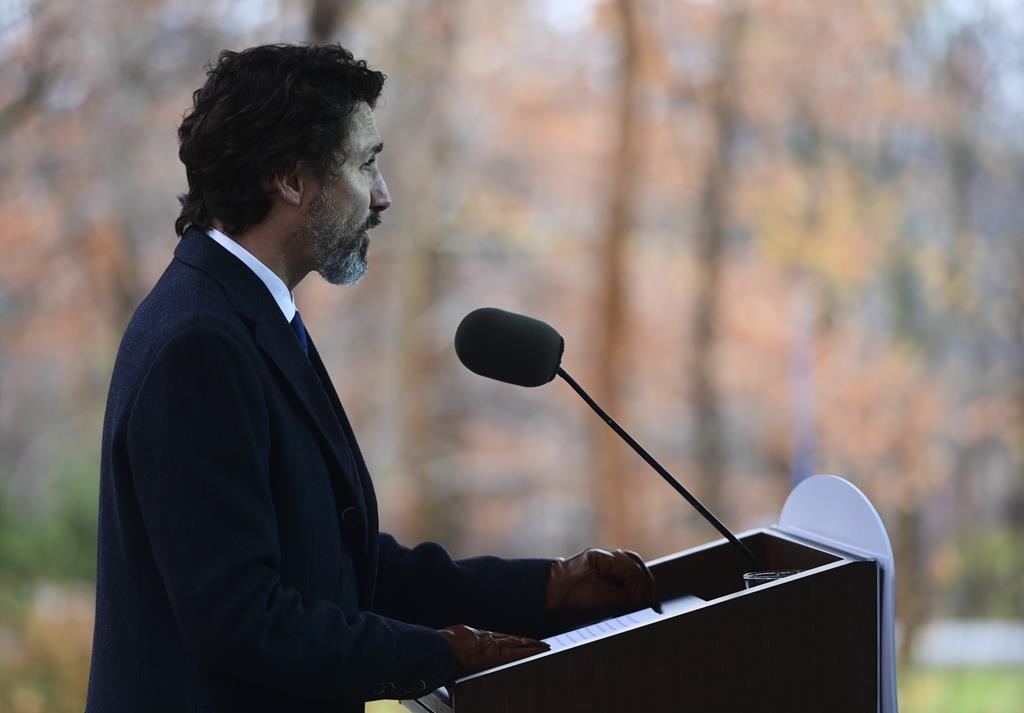 Prime Minister Justin Trudeau holds a press conference at Rideau Cottage during the COVID pandemic in Ottawa on Tuesday, Dec. 1, 2020. Photo by The Canadian Press/Sean Kilpatrick
Previous story
Next story

Provinces are criticizing the federal Liberals for failing to signal more help for health-care systems and strained provincial coffers in its new spending plans, setting up a potential showdown next week between the prime minister and premiers.

Prime Minister Justin Trudeau will meet Dec. 10 with the country's premiers, who have been demanding a meeting since September to talk about the annual federal transfer payments to provinces and territories for health care.

The fiscal update released Monday, which proposed some $25 billion in new spending to top up and expand existing programs and create new, targeted support for hard-hit industries, did not detail a bump in health-care spending beyond increases planned before the COVID-19 pandemic.

Federal health transfers to provinces will rise to $43.1 billion next year from $41.9 billion this year, as part of a prearranged three per cent annual increase.

Provinces say the proposal still falls well short of what is needed to properly fund their systems, not including the added costs associated with COVID-19.

They want the federal government to boost its share of health-care funding by an extra $28 billion this year with annual increases of $4 billion thereafter.

"The primary objective of the premiers is to see a structural change in how health care is funded," Ontario Finance Minister Rod Phillips said Tuesday in an interview.

"And I think they're going to be successful because it is the No. 1 thing that Canadians are interested in right now, in the middle of a global pandemic, is making sure we have stable, long-term health-care funding."

The Liberals argue they've sent plenty to the provinces for pandemic-related measures, totalling $24 billion to support health-care systems across the country.

On Tuesday, Trudeau said he planned to hear out the provinces about their needs during and after the pandemic, but wouldn't commit to added spending.

His Liberal government's fall economic statement must first survive a confidence vote in the House of Commons. Failure to gather the necessary support would mean the minority government falls, which could plunge the country into a federal election.

"I am reasonably confident that none of the opposition parties wants an election right now. We certainly don't want one," Trudeau told reporters outside his Ottawa residence.

"We want to get these supports out to Canadians. And there are certainly things in this fall economic statement that every party should be able to support in terms of helping Canadians."

Spending to date is putting the federal deficit on track to reach $381.6 billion this year, but the government's math says it could close in on $400 billion if widespread lockdowns return in the coming weeks.

Pandemic-related spending has sent total federal transfers this year to $99.7 billion. Next year, the amount falls to $82.1 billion, near where it was before the pandemic, based on figures in the fall economic statement.

"There's not a lot of room left for other commitments because of (Trudeau's) irresponsible and insatiable appetite for spending other people's money," Poilievre said.

Rebekah Young, Scotiabank's director of fiscal and provincial economics, wrote in an analysis that one-off transfers to provinces were necessary under the circumstances, but there should be a structural shift in the long term to make the country's finances sustainable.

"And the discussion should be broader than expenditure-shifting, as provinces have been reluctant to take up revenue capacity given up at the federal level in recent years," she wrote.

The Liberals are proposing extra help through a revised fiscal stabilization program that sends money to provinces facing a year-over-year decline in non-resource revenues.

The economic statement looks to lift funding capped now at $60 per resident up to $170.

Alberta Finance Minister Travis Toews said his province expects to receive $750 million under the new limits, which falls well short of what Alberta could use.

He said he was disappointed the Liberals didn't eliminate the cap as provinces have asked.

"We're going to continue to seek support from other provinces, and we're disappointed in what I would call is really not even a half measure," he told reporters at the provincial legislature.

Newfoundland and Labrador's Finance Minister Siobhan Coady said the province still wouldn't qualify for help through the stabilization fund this year despite a 45 per cent drop in offshore oil revenues.

She added the increase in the cap is unlikely to be a big benefit.

This report by The Canadian Press was first published Dec. 1, 2020.

— With files from Shawn Jeffords in Toronto, and Dean Bennett in Edmonton

Canadians not worried other nations will get COVID-19 vaccine first: poll

The next act: Feds' fiscal update needs to reflect pandemic challenges ahead