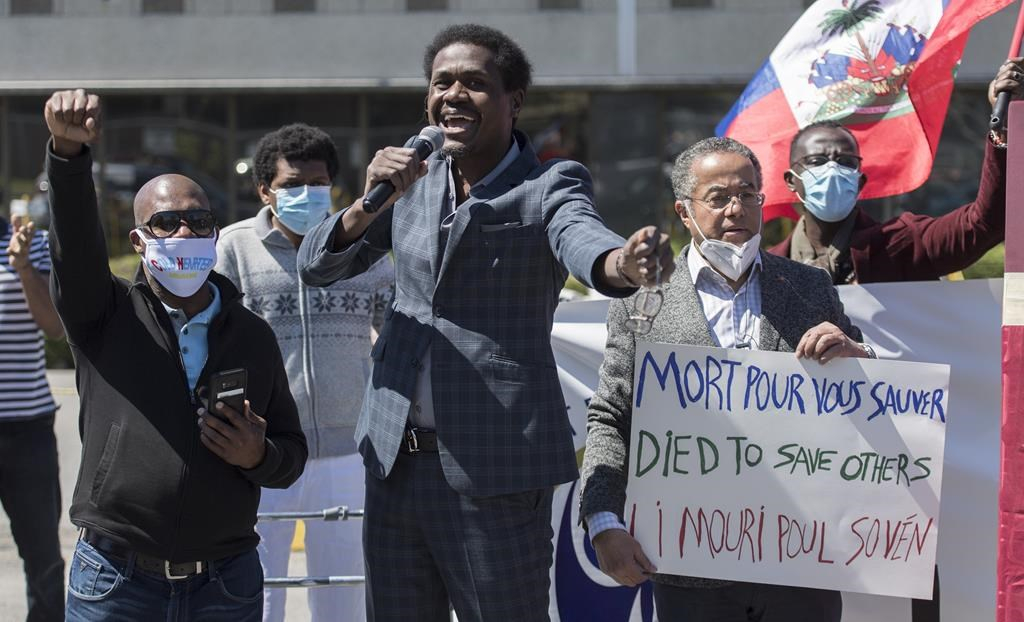 MONTREAL — Refugee advocates are criticizing Canada’s decision to resume deportations before the country irons out the details of a program to grant permanent residency to asylum seekers who have been working in the health-care system during the COVID-19 pandemic.

Frantz Andre, who advocates on behalf of asylum seekers, says the decision has heightened the feelings of insecurity among the essential workers dubbed "guardian angels" by Quebec Premier Francois Legault.

The Canada Border Services Agency confirmed it resumed deportations as of Nov. 30, after halting most removals in March due to the pandemic.

The agency clarified that it would not be deporting people who are likely to qualify for permanent residency under a federal program announced in August to grant a path to residency for people working in the health-care sector or in long-term care or assisted living facilities.

"The CBSA would like to clarify that the agency will not be removing those who may be eligible to qualify for permanent residency under the guardian angels public policy," the agency wrote in an email Tuesday.

Advocates estimate that hundreds of asylum seekers have been working in long-term care homes in Quebec, which bore the brunt of the first wave of COVID-19 this spring.

Andre notes that the final details of the program have yet to be made public, leading many of the so-called guardian angels to fear they may yet be deported.

"So, we’re starting (deportations) three weeks before Christmas, when the program and the details of this special program for the asylum seekers or orderlies cannot be announced," he said.

"I call this criminal. This is not right."

Andre said the initial elation over the announcement of the program has faded, leaving many asylum seekers feeling fearful and unsure if they’ll qualify.

He says some workers who could have been eligible have given up and decided to return home; others have contemplated suicide.

Advocates estimate that hundreds of asylum seekers have been working in long-term care homes in Quebec, which bore the brunt of the first wave of COVID-19 this spring.

Wilner Cayo, the president of a group that advocates for asylum seekers and visible minorities, notes that even asylum seekers working in long-term care — the exact group targeted by the program — are not sure they’ll qualify because there are other criteria to meet, including having been issued a work permit and having a certain amount of experience and hours worked.

He said the uncertainty is causing people "enormous anxiety."

"When they take such a long time and the rules are not clear, we don’t know what to expect," he said in a phone interview.

Quebec has a large degree of control over immigration criteria for the province, and it will select the applicants who qualify under the federal program and wish to reside in Quebec.

In an email, a spokesperson for the Quebec Immigration Department said the program is expected to come into effect over the winter, and the details of how it will apply in Quebec will be announced "shortly."

Cayo said the program also does not address the situation of other essential workers, including security guards and cleaning staff in care homes, truck drivers and those working in food production.

Their contribution has shown they are not a burden to Canada, but a gift, he added.

Andre believes the deportation order should be suspended until it becomes clear who exactly is eligible for the guardian angels program.

But in his opinion, all the asylum seekers who have been in the country since the pandemic began deserve to stay.

"I think they all have contributed economically, to saving lives, and Canada is better thanks to these people," he said.

In its email, the CBSA defended its decision to deport, noting that the "timely removal of failed claimants plays a critical role in supporting the integrity of Canada’s asylum system."

The agency also said the volume of deportations is expected to be reduced for some time, and that claimants will continue to have access to all the appeals and recourses available under the law.

This report by The Canadian Press was first published Dec. 2, 2020