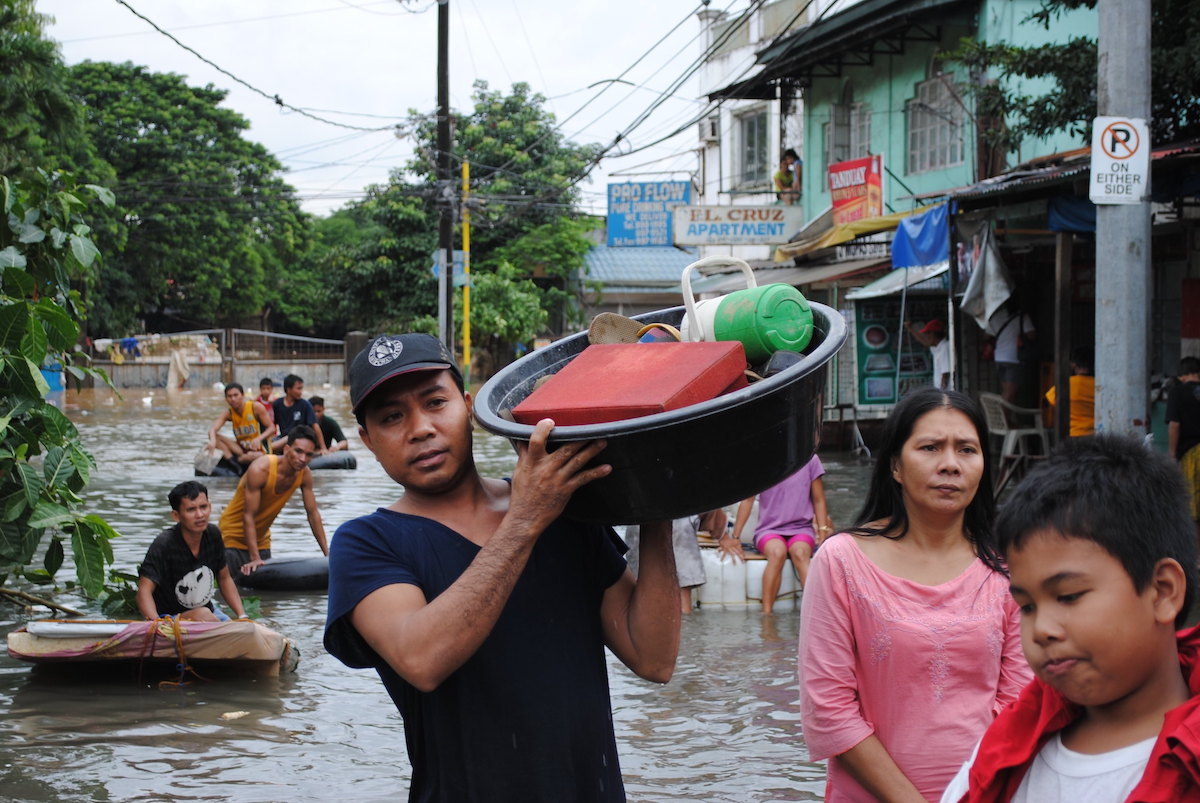 Flood damage in Manila, Philippines, 2012. Photo by AusAID via Department of Foreign Affairs and Trade/Flickr (CC BY 2.0)
Previous story
Next story

This article was originally published by Yale Environment 360 and appears here as part of Canada's National Observer's collaboration with Climate Desk.

As seas rise and coastal storms intensify, policy-makers and low-lying cities around the globe are increasingly wrestling with the reality of needing to relocate entire communities to higher, safer ground. Scientists estimate that up to 340 million people in coastal areas could be displaced by 2050, and 630 million by 2100, in locations from the United States to Nigeria to the Philippines.

Such widespread, organized retreat from the shore will take massive amounts of planning and funding, but geographer Jola Ajibade warns it also needs to be done in an equitable way. For that to happen, she says, policy-makers must take into consideration the significant cultural, economic and racial justice impacts on the communities being uprooted.

In an interview with Yale Environment 360, Ajibade, an assistant professor at Portland State University who studies the politics of climate change adaptation and resilience planning in the global south, talks about how managed retreat programs need to differ in different parts of the globe, how many of these programs unfairly target low-income communities and communities of colour, and what relocation plans actually need to be equitable and successful.

“How do we move people away from places of risk,” she says, “without stripping them of their identity, agency, culture, and indeed, livelihood?”

Yale Environment 360: You grew up in Lagos, Nigeria, one of world’s most at-risk major cities from sea level rise. Did you experience flooding during your childhood?

Jola Ajibade: I grew up in Lagos in an area that typically should have been a swampland. It shouldn’t have been a place where people would build houses. But as you know, like most cities in the world, with urbanization there was just this expansion of buildings and structures all over the place.

Where I grew up, it’s called Ijeshatedo. We didn’t know anything about climate change back then; I just noticed that, as a child, it flooded all the time. We were living on the first floor of a building and it was flooded almost every time it rained. When I would ask my mom, “Why?,” she would tell me, in Yoruba, “They shouldn’t have built in this place. This is swampland.”

Now that I’m working on issues around climate change and adaptation, I’m realizing that, indeed, what my mom said at the time was right. There are areas around the coast, there are areas in certain cities, where it should have just been left to nature.

But I’ve noticed that the flooding in Lagos in the last 10 years or more, it isn’t isolated anymore. When I was young, it was isolated to those swampy areas, including where I lived. But now it is everywhere. It happens in the wealthy areas of the city as well. So that’s one thing that has changed. It’s no longer only the poor being impacted. It’s everyone.

“How do we move people away from places of risk without stripping them of their identity, agency, culture, and indeed, livelihood?" Geographer Jola Ajibade discusses managed retreat in communities impacted by #climatechange.

e360: Much of your research focus has been on managed retreat in the global south. How does retreat differ between that region and in more developed nations, like the United States or Europe?

Ajibade: There are so many differences. I will start with one that I don’t think is acceptable — what happened in Lagos in 2017, where about 30,000 people living in [the informal fishing settlement] Otodo-Gbame were forcefully kicked out. I don’t call that a buyout. They were literally kicked out by the government.

There was this policy, the Lagos Climate Change Policy, that said, “We’re going to relocate and resettle people and infrastructure and industry.” But the reality of who has been relocated and who has been moved, it was just the poor. And they were not given any support, not even given a place to relocate to. So that was very problematic the way that happened.

In Manila, there are three different types of managed retreat. After Ondoy in 2009, the big tropical storm where more than 850 people died and about seven million people were affected in the whole of the Philippines, the government put in place a plan to relocate the poor because, they said, they’re part of the reason why the city got flooded.

One of the first things they did was to immediately give a few sets of people in certain slum areas money to relocate. In 2013, they institutionalized a program called the Oplan LIKAS Program, in which they spent 50 billion pesos ($1 million) to build new houses in the outskirts of the city and then relocate 100,000 people.

The issue is that when they finished building… many of the structures were not properly built. They gave people like 18,000 pesos ($373) and said, “OK, this is the money, don’t take any of these things from your slum, they’re going to mess up that place you’re going. Just take your bag and clothes and go.”

The other problem was that some of the new places also got flooded. It wasn’t like they were free of flooding. I would say retreat in Manila was the way to decongest the city. It wasn’t just about protecting people.

On the other hand, while that was happening, there was this place called New Clark City that the government was planning to relocate the political class to. Basically, people who work in the administrative offices in the government in Davao City and Manila City. In New Clark City, railways have been built, there’s even a sport center. The question is, if they can do that, why couldn’t they do the same thing for the poor people?

e360: You’ve used the phrase, “the retreat and return cycle.” What does that mean, and is that what happened in Manila?

Ajibade: Yes. People retreated. They were like, “Fine, we’ll go.” But then they got there and they were shocked about what they found and they said, “No, we’re going back.”

And so the retreat and return, in my opinion, was the poor’s way of resisting, it was their way of showing their own agency — we agreed to something, if (the government is) not going to uphold its end of the bargain, then we’re going to resist that type of relocation that doesn’t really advance our lives, that doesn’t make our life any better.

Many of the people who are living in the Manila slums are actually migrants, typically people who leave rural areas looking for opportunities and then they come to the city. You don’t want to move them back to areas where they don’t have anything again.

e360: There is a long history of unjust relocation programs, particularly among Indigenous or low-income communities or communities of colour. How do you get such groups, that might balk at the idea of government-led managed retreat because of that history, to sign on now, in the face of climate change?

Ajibade: This is a tough question. One of my colleagues, A.R. Siders, has argued that in North Carolina, retreat seems to be focused in places where you have low-income communities of colour. With my global research, I see the same thing. Retreat is in fact happening to the poor; we’re seeing injustice being reinforced through retreats. New properties are being built for the wealthy along the coast, while the poor are being moved away from it.

We need specific guidelines, we need specific institutions and consistent policy, on how to retreat and who should retreat and when. And also who should be at the table discussing retreat. (Decisions are being made) to find ways to keep people on the coast, but it is mostly in places that would maintain the wealth of certain groups of people.

In this case (the U.S.), typically white people, in the global south, typically wealthy people. If we don’t have policies and guidelines that are equitable, we’re likely to see a repeat of what one may think about as a different form of colonialism — climate colonialism.

We need to look carefully at the picture of who this is happening to. Who is losing the generational wealth that they might have had but now have lost because they’ve been asked to move?

e360: What about the cultural implications or loss associated with such relocation programs?

Ajibade: Exactly. How do we move people away from places of risk without stripping them of their identity, agency, culture, and indeed, livelihood? With retreat, we may see one family get a buyout, but another doesn’t or they don’t accept it. Those communities lose their own culture piecemeal-fashion.

In the case of Isle de Charles, in Louisiana, the fact that the community has agreed to move as a whole, as one unit, to higher ground, I think is a good thing. But what is challenging is that they also are saying, “We still want to be able to maintain this tie to the land that we’re leaving, because even though we leaving that land behind, it was a place that we’ve lived for years, it was a place that we loved, it was a place that had meaning to us. And we want to keep some form of ownership.”

But the government is saying, “No, if you’re taking up this new place in the mainland, then you have to forfeit that.” So in forfeiting the land that you feel very tied to, it says something about losing a part of your identity. That land is an identity for them, it’s something that matters to them.

The other part of this is when people move, they’re moving to a community where people don’t know them. Finding ways to foster that community building and solidarity between relocating communities and receiving communities is another thing that we need to think about.

This is the same issue in the case of Kiribati and Fiji: Kiribati has been able to buy some land in Fiji so it can relocate its people. But there are people asking when Kiribatians move to Fiji, are they going to be Kiribatians in Fiji or are they taking a new Fiji identity over the long-term. And do they call themselves Fijians? And then if their country or if their island state disappears, when you then say, “I’m a Kiribatian” but your country is under water, what does that say about your existence?

e360: Is there a place that is doing assisted migration the right way? That could serve as a model for other communities?

Ajibade: Many people have asked me this and there is no good answer. Originally, I thought Isle de Jean Charles could be a model, but the more I dug into it, the more I realized that there are a lot of problems. Even with government support and money, there are still so many issues relating to unequal power relations in how this is playing out.

Those communities, they bring not just their bodies, they bring all of the skills and resources they have as well. We just need to acknowledge that managed retreat is always going to have trade-offs.