The water has been bridged: COVID-19 cases on the rise on Vancouver Island 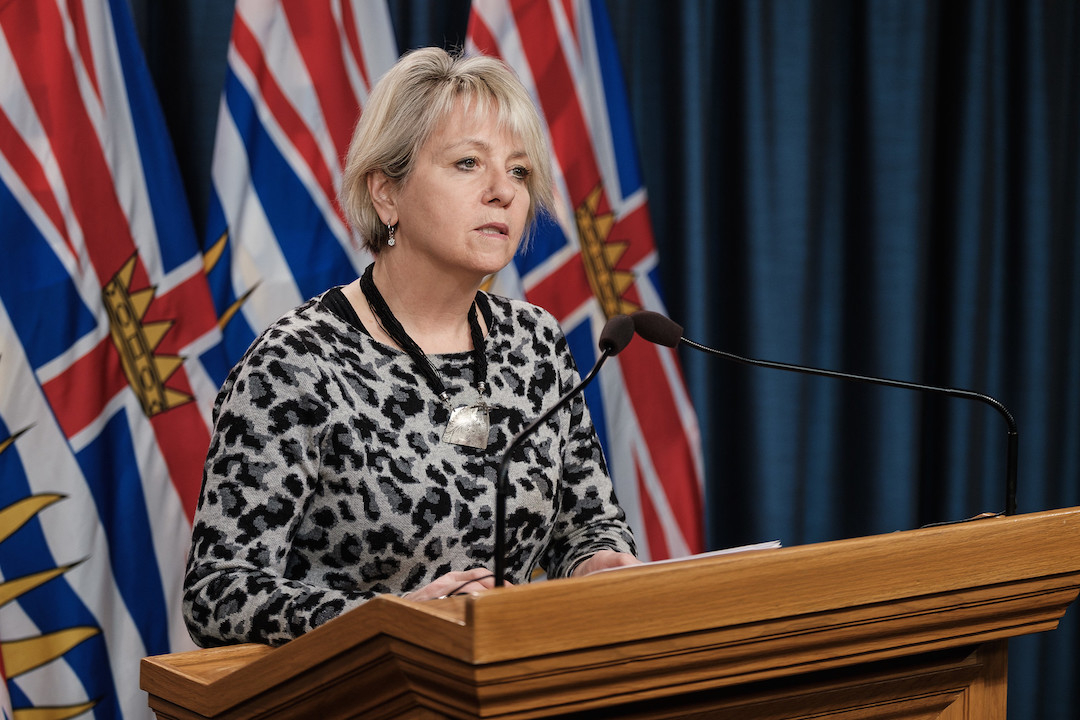 B.C. provincial health officer Dr. Bonnie Henry said Thursday she was concerned with the spread of COVID-19 in smaller communities in health regions outside the Lower Mainland. Photo courtesy of the B.C. government
Previous story
Next story

The fortress that was Vancouver Island has been breached when it comes to the low COVID-19 case numbers it enjoyed compared to B.C.’s Lower Mainland during earlier stages of the pandemic.

Provincial health authorities noted this week that though numbers are still high, there has been a levelling off of cases in the Fraser Health and Vancouver Coastal Health regions. But case numbers are rising in the province’s Northern and Interior health regions, and Vancouver Island is also continuing to see new cases.

Ten of the 694 new cases in B.C. were in the Island Health region, provincial health officer Dr. Bonnie Henry said at Thursday’s COVID-19 briefing. There were also 12 new deaths due to the virus, all in the Lower Mainland.

There are now 9,103 active COVID-19 cases across the province, including the 277 active cases in Island Health, with 12 people in hospital and four in critical care.

Henry acknowledged that some regions of the province were struggling to contain numbers they had not experienced before.

“Many of our communities around this province are affected right now, many of whom went through the first wave and the first number of months of this pandemic without having cases, without having it touch close to home,” Henry said.

But the doctor urged people to continue to follow pandemic protocols to protect the elderly, as well as strained and tired health-care workers.

“We need to do our bit everywhere, to make sure that we support and protect them, too.”

Two First Nations communities in the Island Health region remain under lockdown while dealing with outbreaks: the Ehattesaht Chinehkint First Nation community near Zeballos and the Klahoose Nation on Cortes Island.

The battle to flatten the #COVID19 curve on Vancouver Island can still be won if people continue to follow pandemic protocols, says one infectious disease modelling expert.

However, the battle to flatten the curve on Vancouver Island can still be won if people continue to follow pandemic protocols, said Daniel Coombs, an expert in the modelling of infectious disease.

Until recently, the Vancouver Island region saw a handful of daily cases, but since November, new cases of the virus have largely run in the double digits.

“If Vancouver Island wants to maintain its really impressive record with the virus, it remains critical that people remain vigilant and follow the public health guidance that we're getting,” said Coombs, a mathematics professor at the University of British Columbia.

At the moment, the COVID-19 situation on Vancouver Island is akin to the potential for wildfire in dry summer conditions, he said.

“The forest fire analogy is a good one,” Coombs said.

The virus won’t have fuel to spread if people continue to avoid crossing back and forth to the mainland except for essential travel and don't indulge in any social gatherings outside their households.

“If physical distancing, mask protocols and other measures are maintained on Vancouver Island, it prevents those sparks (of COVID-19) from growing and getting out of control,” he said.

Over the past two weeks, the Central Vancouver Island health service delivery area recorded 118 COVID-19 cases, followed by 66 cases in the South Island and 37 in the North Island area, data released Thursday showed.

Island Health currently has exposure notices for eight schools in the region, including six in Port Alberni, one in Victoria and one on Salt Spring Island.

As well, an outbreak at Veterans Memorial Lodge long-term care home in Victoria was announced over the weekend, and the lockdown of the Tsawaayuss-Rainbow Gardens facility in Port Alberni remains in effect.

The greatest areas of concern for outbreaks are in long-term care homes and multigenerational households where the elderly people are most at risk from the virus, Coombs said.

As well, smaller rural communities on the surrounding islands or spread across Vancouver Island are more vulnerable due to the lack of medical resources and the difficulty of accessing rapid testing, he added.

Henry also expressed the need for individuals to make the right choices to protect groups most at risk.

“We know that our long-term care homes in particular are most vulnerable. It's the biggest challenge that we are facing,” she said.

“I recognize that this sacrifice is one that all of us are taking, and the vast majority of people around B.C. have taken this to heart.”

Though the daily COVID-19 case numbers on Vancouver Island are still fluctuating up and down, overall, the numbers appear to be flattening, Coombs said.

But keeping it that way will depend on people adhering to physical distancing, Coombs said.

This will be necessary for some time into the future, despite hopes vaccines are around the corner.

“We’ve been hearing a lot about vaccination at the moment,” he said.

“But if we haven't actually deployed the vaccine fully in our communities in B.C., there’s a risk that people are going to loosen up too quickly or too early.

“Yet, I can definitely foresee some restrictions lasting into the summer, or maybe even longer.”