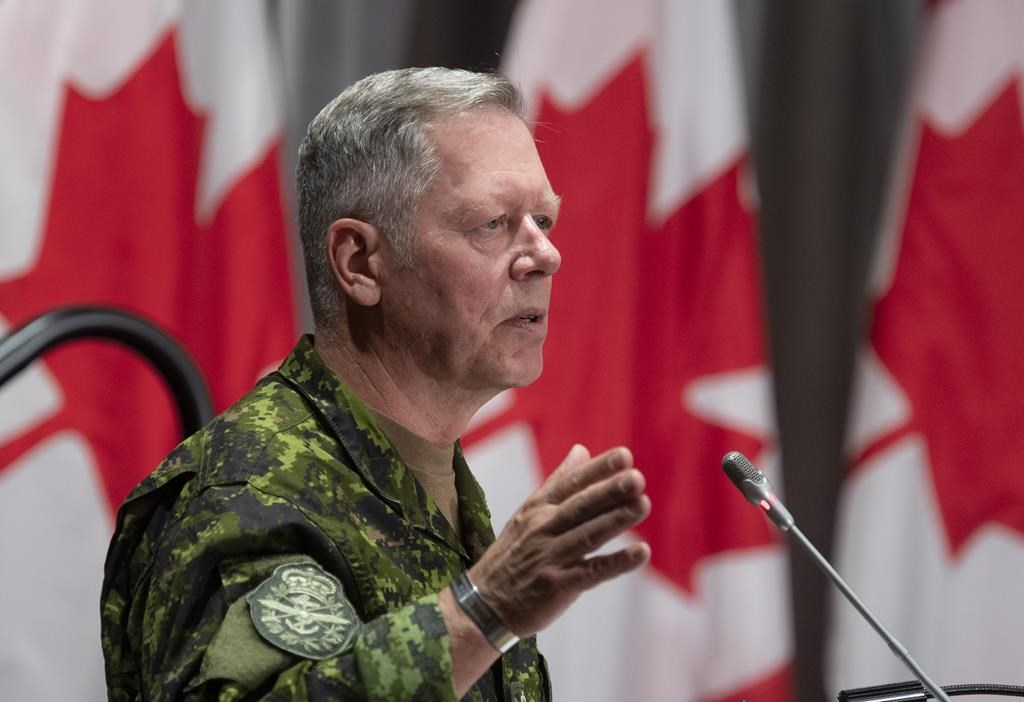 Chief of Defence Staff Jonathan Vance responds to a question during a news conference on Friday, June 26, 2020 in Ottawa. File photo by The Canadian Press/Adrian Wyld
Previous story
Next story

Federal and provincial governments will stage a dress rehearsal Monday to test the complex plan to get precious COVID-19 vaccines distributed to every corner of Canada.

Maj.-Gen. Dany Fortin, who was named last week to lead the Canadian military's role in the vaccine distribution process, says the dry run is intended to get everyone involved comfortable with the intense requirements of distributing a vaccine that has to be kept below -70 C at all times.

"We are hard at it in the next couple of weeks to ensure that we are ready," said Fortin. "I kind of like the idea of being ready before the Christmas time frame so we are certain to be ready when it comes in January."

A national operations centre established in Ottawa is quarterbacking the effort, and looking at two phases of a vaccine rollout. The first will be over the winter, with about six million doses of vaccine from Pfizer/BioNTech and Moderna, enough to vaccinate three million people with two doses each.

The second will start in the spring, when "millions more" doses are expected from Pfizer and Moderna, and likely from at least some of the other five vaccines Canada has signed on to buy.

Pfizer's vaccine could be approved in Canada as early as next week and Moderna's before the end of December. Those two vaccines are the sole focus of Canada's initial rollout plans, and while they use similar technology known as messenger RNA, they have very different storage requirements.

Pfizer needs to store its vaccine in ultracold temperatures — below -70 C — while Moderna's can survive only in temperatures below -20 C.

Pfizer's vaccine is so delicate the company built special boxes to transport the vials, packed on dry ice. Pfizer directs that the thermal shipping boxes shouldn't be opened more than twice a day and for less than a minute at a time. Dry ice must be replenished at least once every five days. Pfizer's vaccine can survive in a refrigerator after thawing, for about 24 hours.

The Moderna vaccine can be stored for up to six months in a regular freezer, and can survive after thawing, if kept in a refrigerator, for 30 days.

Fortin said because of the temperature requirements, there are two different supply processes for Canada. Pfizer will ship the doses directly to provinces, with 14 delivery sites now identified. At least one of them is in every province. Eventually there might be 205 of these sites, he said.

Moderna will deliver its vaccine to one national delivery site, and Canada is about to contract with a private logistics supplier to then move the doses to the provinces as needed.

The provinces will develop their own processes to distribute to sites across their jurisdictions. New guidance on who should get the vaccine first is expected in days, said Dr. Howard Njoo, the deputy chief public health officer.

Canada's initial recommendations included too many people for the initial doses available in the first batch, so it is being narrowed down.

The United Kingdom, which on Wednesday became the first to approve the Pfizer vaccine, will initially vaccinate people in long-term care homes, and those who care for them, followed by all people over the age of 80, and front-line health workers.

Fortin said the 14 Pfizer delivery points will be equipped and ready by Dec. 14 for the eventual arrival of the vaccines. The logistics contract for Moderna will be in place no later than Dec. 15, he said.

Fortin said there have been "tabletop" exercises to plan the distribution over the last weeks, including one on Wednesday that involved more than 150 people from all 13 provinces and territories, and eight federal departments and agencies.

The Canadian Armed Forces received formal orders last week to start planning for the distribution of COVID-19 vaccines, though the military’s top commander says preparations have been underway for longer.

Fortin said the military has been involved on some level since the spring.

A planning directive issued last week by chief of the defence staff Gen. Jonathan Vance notes the possibility of having to pick up COVID-19 vaccine doses from the United States and Europe on short notice, and outlines concerns the military will be asked to help with distribution while also responding to floods and other emergencies.

Military planners are also preparing to have troops work at vaccine-storage facilities and deliver freezers and other medical supplies to various regions. But the military remains as much in the dark as everyone else about the specific timing for the doses to start arriving.

“The details of the Armed Forces’ plan become firm when we understand what support will be required by the provinces and territories,” Vance said in an interview Wednesday.

Dr. Supriya Sharma, the chief medical adviser at Health Canada, said those details will be more clear once the Pfizer vaccine is approved.