Conservatives prepared to talk out the clock on assisted dying bill: O'Toole 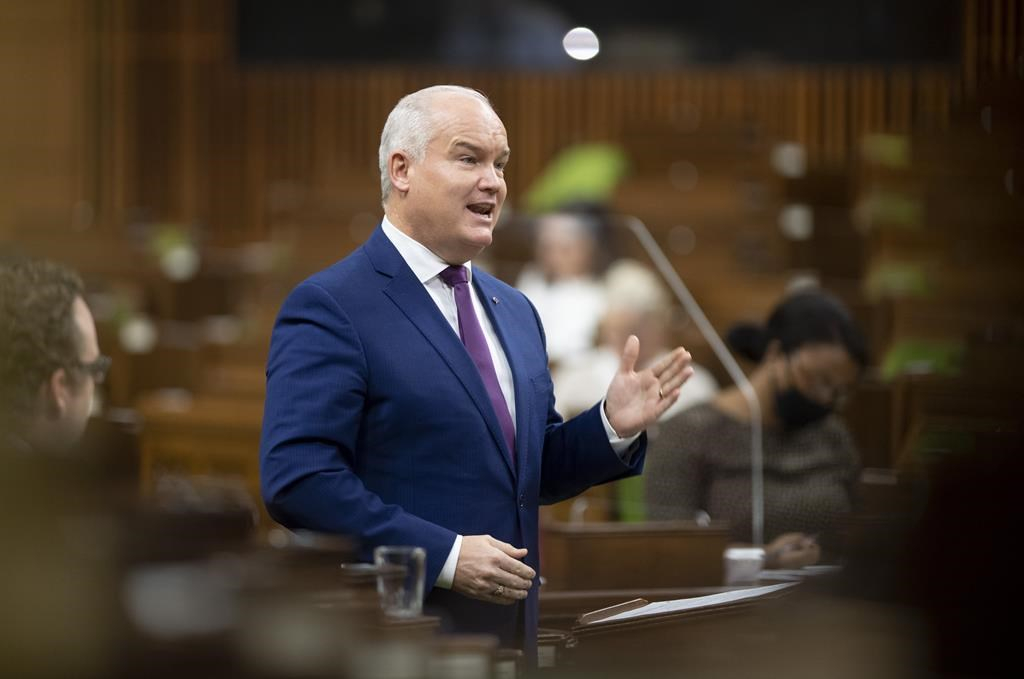 Conservative Leader Erin O’Toole had served notice a few hours earlier that his party will continue to talk out the clock on Bill C-7.

O’Toole said the bill removes safeguards to protect people with disabilities from being coerced or pressured by a lack of supports into ending their lives prematurely. And he said his party will continue to stand up for them for as long as it takes.

"I think all Canadians want to make sure the vulnerable are provided for, that is all we’re asking," he said.

"And so if we have to stay here for 24 hours a day, seven days a week to stand up for those Canadians, we will do that."

Bill C-7 is supposed to bring Canada’s assisted dying law into compliance with a Quebec Superior Court ruling last fall, which struck down a provision that allows assisted dying only for people whose natural death is reasonably foreseeable.

The court gave the government six months to comply, a deadline that has been extended twice to take into account parliamentary delays caused by last fall’s election and the COVID-19 pandemic.

O’Toole suggested that Lametti would seek another extension but the justice minister denied that.

Lametti said his focus, for now, remains on doing everything he can to get the bill through the Commons and the Senate by Dec. 18. But he added that "all options are still open."

He warned that missing the deadline will mean that the foreseeable-death requirement will continue to apply across the country — except Quebec.

"The basic thing that happens is that a lot of people suffer needlessly thanks Mr. O’Toole’s inability to control a certain rump element of his caucus," Lametti told reporters.

He said the legal vacuum would create uncertainty in Quebec and have a "chilling effect" on medical practitioners in that province who would fear potential criminal liability for providing assisted dying for people who are not near death.

"It will also create inequality across the country, which in and of itself is grounds for further legal action."

Lametti would not comment on the possibility of the government introducing a motion to cut off debate on the bill, saying that’s up to government House leader Pablo Rodriguez. Such a motion would need the support of at least one other opposition party, which likely wouldn’t be an obstacle since the NDP and Bloc Québécois both support the bill.

Bloc Leader Yves-François Blanchet said Tuesday that Bill C−7 is "essentially about compassion" and is "very, very popular" in Quebec. And he urged O’Toole to let it come to a vote.

"I ask the Conservative leader … to tell his people to compromise, to hurry, and this law will pass," Blanchet said.

Notwithstanding Lametti’s suggestion that O’Toole is catering to the socially conservative faction in his caucus, the vast majority of Conservative MPs are opposed to the bill.

Last week, 103 Conservatives, including O’Toole, voted against accepting the bill as amended by the Commons justice committee. Just 16 supported it.

Efforts by the federal government to comply with the deadline are running well behind schedule as the Conservatives have been seizing every minute of debate available to press several concerns they have with the bill.

The Commons is currently scheduled to break for the holidays on Friday, returning in late January.

The bill must still pass third reading there, then go to the Senate. If the Senate amends the bill, it would have to return to the Commons, all steps that may not be possible to take under the current timeline.

O’Toole said Tuesday that’s the government’s fault, and the Liberals had options they didn’t pursue to get Parliament out from under the pressure of a deadline.

"Today, they may be asking for a delay from the court, something they should have done months ago. They should have appealed the decision or not prorogued," he said.

Other Conservative MPs advanced that line of argument during their own speeches Tuesday.

That in turn prompted accusations from the Liberals that the Opposition is trying to ignore a court ruling, as well as calling into question the character and competence of a Quebec Superior Court judge.

The bill has been caught up in the twists and turns the COVID-19 pandemic has created for much of the Liberals’ legislative agenda.

An identical version of the bill was introduced in February, though never made it to committee before Parliament closed its doors in March as part of the countrywide shutdown to slow the spread of the novel coronavirus.

When Parliament resumed, it was dealing exclusively with pandemic-related matters, and then, after the government prorogued Parliament in August, the bill had to be reintroduced.

That happened in October, and the Liberals argue there has been extensive debate since.

This report by The Canadian Press was first published Dec. 8, 2020

Okay, O'Toole. You want to

Okay, O'Toole. You want to put the potential harm of some to the committee's, documented, in-your-face agony and suffering of many others. You're another loser suit.

Editted
Okay, O'Toole. You want to put the potential harm of some to the extant, documented, in-your-face agony and suffering of many others. You're a suit with no compassion.