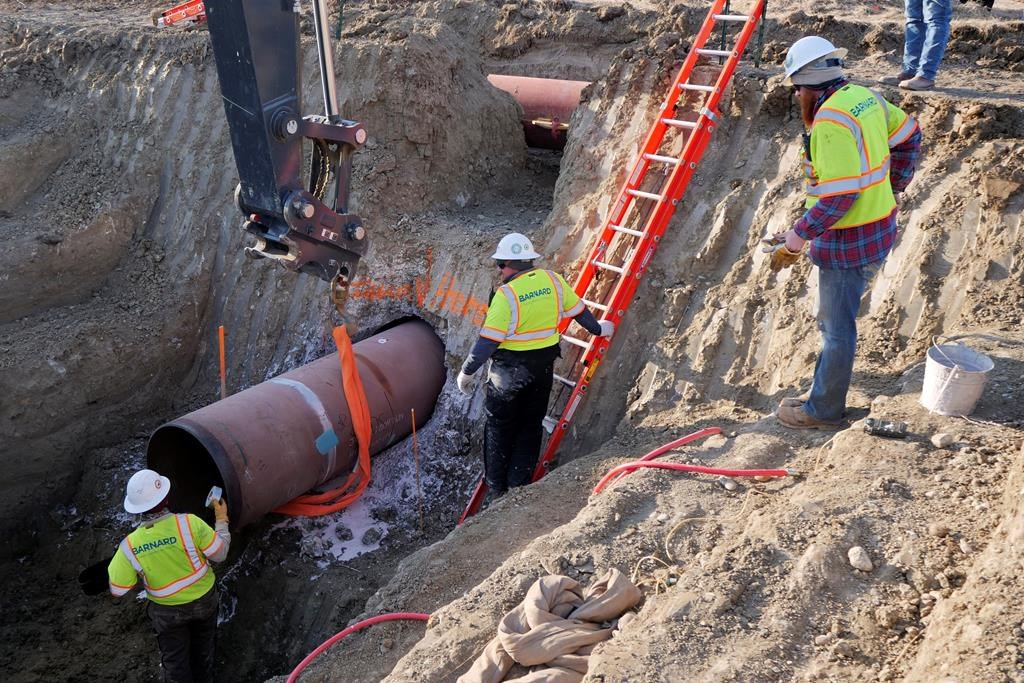 In this April 13, 2020, photo provided by TC Energy, construction contractors for TC Energy are seen installing a section of the Keystone XL crude oil pipeline at the U.S.-Canada border north of Glasgow, Mont. File photo by TC Energy via AP
Previous story
Next story

A new report from the U.S.-based Rainforest Action Network says two of them — Keystone XL and Enbridge's Line 3 pipeline — are being "rammed through" in the final weeks of Donald Trump's presidency.

The report points to a long list of prominent international banks it says are lined up to back the projects as evidence they are far from dead.

Biden's campaign has already made it clear the president-elect intends to rescind presidential permits for TC Energy's Keystone XL project once he takes office.

But Jason Disterhoft, the report's author, says there's an effort afoot to make it difficult for Biden to follow through on that commitment.

Disterhoft says it will fall to the banks to decide in the coming months whether to honour their own commitments to limiting the emissions that cause climate change.

"It's last call at the Trump bar," said Disterhoft, the network's senior campaigner on the climate and energy file.

"(Keystone XL) is the project that they're trying to push through as much as they can, and make it as hard as possible for the Biden administration to follow through on its promise."

Biden has been silent on Line 3, which aims to replace an existing line between Edmonton and Enbridge's facilities in Superior, Wis. And he's not said a word about Keystone XL since his campaign issued a statement back in May.

Still, the deck appears stacked against it: Biden has named former secretary of state John Kerry, whose advice led then-president Barack Obama to reject Keystone XL in 2015, as a special envoy on climate.

Publicly, at least, environmental groups like the Sierra Club are taking his campaign officials at their word.

"President-elect Biden has committed to acting immediately to rescind the permits for Keystone XL, and we are confident that he will fulfill that commitment," senior Sierra Club lawyer Doug Hayes said in a statement.

"Rescinding Donald Trump's 'presidential permit' and other necessary federal approvals will leave TC Energy with no path forward and stop this dangerous tar sands pipeline proposal once and for all."

Biden himself has yet to enunciate the commitment his campaign made to rescind the permit issued by Trump in 2017, said Eric Miller, a Canada-U.S. expert and president of the Rideau Potomac Strategy Group in Washington.

And politically, it's easier to deny a permit, which Obama did in 2015, than to rescind an existing one, he said.

"All the Biden administration has to do is nothing, just do nothing, and let it be built," Miller said. "It sends a much bigger signal — and will become, I think, a very big problem — if the Keystone XL permit were to be rescinded."

Proponents, including Canada's diplomatic corps in Washington and TC Energy itself, are calling for cross-border pipeline projects to be part of a broader, climate-friendly conversation about a North American energy and environment strategy.

Both Keystone XL and its principal architect have evolved significantly since the Obama administration — with Biden as vice-president — rejected it five years ago, Kirsten Hillman, Canada's ambassador to the U.S., said last month.

Calgary-based TC Energy is "constantly evaluating" new ways to reduce its carbon footprint and improve efficiencies in order to be part of the "North American transition to the next generation of renewable energy sources," said spokesman Terry Cunha.

The math, however, simply doesn't work, Disterhoft said. Both Keystone XL and Line 3 will ensure higher production from the Alberta oilsands for at least the next 10 years, making the goal of zero emissions by 2050 an impossibility.

"Investment in tarsands infrastructure now threatens to lock in production for decades, at a time when the sector should be in a managed decline on a path to a zero-carbon economy."

Construction on the Minnesota portion of Line 3 began earlier this month after state authorities granted a final permit and regulators rejected a challenge from two First Nations groups.

That project doesn't face the same political and public opposition as Keystone XL, although Disterhoft said political leaders across Minnesota are under pressure to intervene, and Biden has been asked to review the project's federal approvals.

"If you're looking at one area where the Biden administration is going to tear itself to pieces, it's on energy and climate," Miller said.

"The problem with the environmental activists is that nothing that Joe Biden can do, beyond outlawing any form of oil and gas production, will be good enough for them."