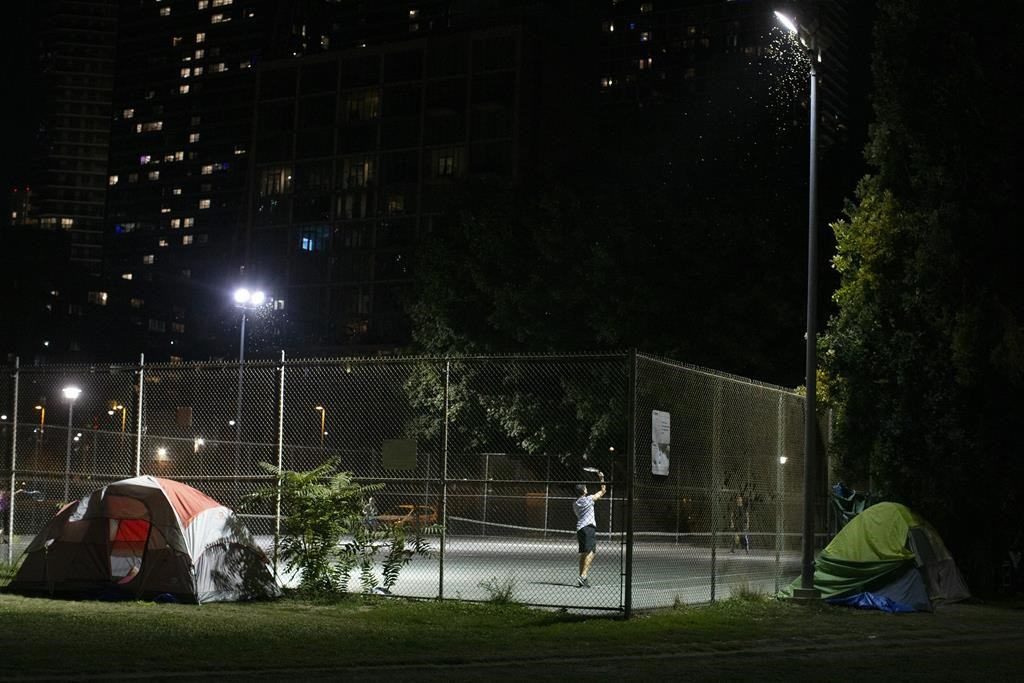 A man plays tennis next to an homeless encampment in Toronto, on Wednesday, Sept. 23, 2020. File photo by The Canadian Press/Chris Young
Previous story
Next story

A government-commissioned report says the effect of COVID-19 on the number of homeless people in Canada won't be felt for three to five years, giving policy-makers a chance to prevent the pandemic from putting people on the street.

One reason for the delay is that people in need will first max out government supports before exhausting their savings.

They then would fall behind on payments like rent, leading to evictions.

The author of the report says it wouldn't surprise him to see homeless counts rise by 10 to 15 per cent in some cities depending on what happens in the labour market.

But given the lead time before the effects are fully felt, the report requested by Employment and Social Development Canada recommends more funding for prevention strategies like expanding a federal rent supplement.

The report also recommends the Canada Revenue Agency take a light touch when it comes to having pandemic aid recipients repay overpayments, particularly those on social assistance.

"CRA could make a decision, very quickly, that … it's not going to try to nickel and dime and get everything back possible, keeping in mind it's a very vulnerable group financially," said report author Nick Falvo, a Calgary-based homelessness expert.

"They're probably at risk of homelessness. The costs of getting housed again are quite substantial, so let's not put them in that position."

Falvo said what happens next will be a result of federal aid, regional labour demands and local housing markets, meaning some cities could see increases in homelessness while others are spared.

Advocates have warned for months about the potential impacts on homelessness from COVID-19, owing to historic losses of jobs and work that disproportionately affected lower-income workers.

A government-commissioned report says the effect of #COVID19 on the number of #homeless people in Canada won't be felt for three to five years, giving policy-makers a chance to prevent the pandemic from putting people on the street.

Groups have anecdotally spoken about rises in the use of food banks and the social services offered by non-profit organizations.

"Although there's a three- to five-year lag, that doesn't mean things aren't happening now," Falvo said. "It just means it takes three to five years for them to fully play out."

In September, the Liberals pumped an extra $236.7 million into a federal program to combat homelessness, and offered $1 billion to rapidly build or buy existing buildings for affordable housing.

That funding, while helpful, was only one-time and likely needs to be ongoing in some form, Falvo said.

His report calls for an enhancement to the Canada Housing Benefit, a joint federal-provincial rent supplement that is tied to people who need housing rather than used to subsidize particular units.

It also calls for a bump in anti-homelessness spending, but directed at households at risk of losing their homes or that have just lost them.

But the recommendation on how to handle the clawing back of emergency aid is likely to get more attention as stories pour in from across the country of people who received the Canada Emergency Response Benefit (CERB) now facing repayment demands from the government amounting to five figures in some cases.

In one instance, a home daycare provider in New Brunswick forced to close in the spring turned to her local MP, Jenica Atwin of the Greens, after receiving a $14,000 repayment request from the CRA, saying her net income before the pandemic was below the eligibility threshold.

Anyone who made more than $5,000 before taxes in the 12 months before applying for the CERB was eligible for the aid.

Green Party Leader Annamie Paul said all repayment notices, some with deadlines at the end of the month, should be immediately suspended until the situation can be sorted out.

"These are people that made good-faith applications, they did as much due diligence as they could under the very confusing circumstances of the early days of the pandemic," she said.

"It simply would not be fair to ask them to make those repayments."