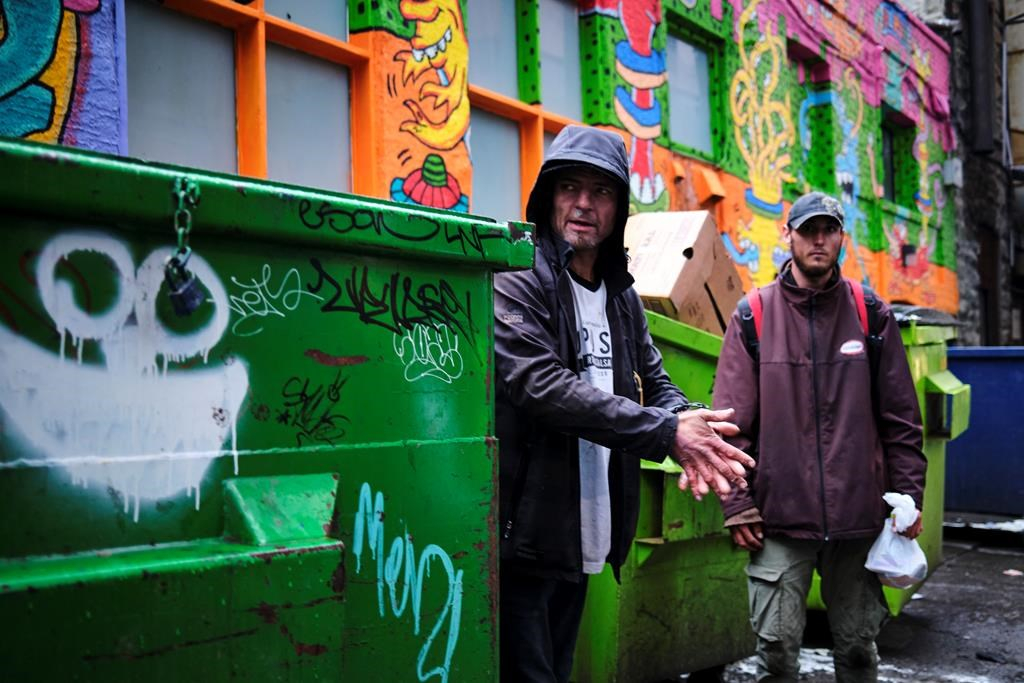 Gordon Kelter, left, who is homeless, uses hand sanitizer in Calgary, Alta., on Wednesday, May 20, 2020, amid a worldwide COVID-19 pandemic. File photo by The Canadian Press/Jeff McIntosh
Previous story
Next story

Gordon Kelter has something to fear more than not having a bed to sleep in at night — catching COVID-19.

"Worried about catching it? Are you kidding me?" said Kelter as he searched behind some dumpsters for his backpack on a recent night in Calgary's downtown East Village neighbourhood.

Kelter, who has been homeless for years, said he has started to sleep on a friend's couch until the pandemic blows over.

He has slept in some awful places, including concrete parkades, he said. But the risk of contracting the novel coronavirus has him avoiding shelters.

"I won't go near the Drop-In Centre. The COVID really freaked me out."

In the drizzling rain one night last week, clusters of people were hunkered under bridges, behind restaurants, in doorways and across from the locked gates of the city's Drop-In Centre.

Chaz Smith, founder of the not-for-profit Be The Change YYC homeless outreach team, was out walking with volunteers Chris Macnab and Jake Tremblay.

They were wheeling a wagon full of bag lunches, including meal replacements, vitamin powder and granola. They also handed out socks, emergency blankets, tarps and tents.

"The tents and tarps are running bare. We've handed out about 50 tents the past little bit," Smith said, who was himself homeless for five years.

Those out on the streets now are scared, he said.

"We used to have a small amount of rough sleepers who are sleeping outside overnight. And now the majority of all the people you see are actually sleeping outside," he said.

"When we ask why aren't you staying in shelters, they'll just say either they can't get in or they're afraid to catch COVID."

Across from the Drop-In Centre, wooden pallets piled with bedding lay under blue, white and green tarps tied to a chain-link fence. Bicycles and overflowing shopping carts were locked to the fence. Loud rap music was blaring.

One man, with blood flowing from a gash on his head, struggled to his feet and hobbled away while holding up his pants. A woman under the tarps screamed at the outreach workers and threw bag lunches back at them.

There have been a total of 24 cases of COVID-19 at Calgary shelters since the pandemic began: 12 at the Drop-In Centre, 10 at Alpha House and two at the Salvation Army shelter. Ten people have recovered and 14 infections remain active.

Trisha Bearspaw was standing on a loading dock behind a shuttered restaurant. The 35-year-old was homeless for 10 years and now lives in a group home, but continues to hang out downtown with her boyfriend, who is still on the streets.

She tested positive for COVID-19 and spent a week in hospital in early April, but says she is fully recovered.

"It was crushing, like I couldn't breath. It felt like someone was sitting on my chest. That's how bad it was."

She knows there's a chance she could catch the virus again, she said.

This report by The Canadian Press was first published May 25, 2020