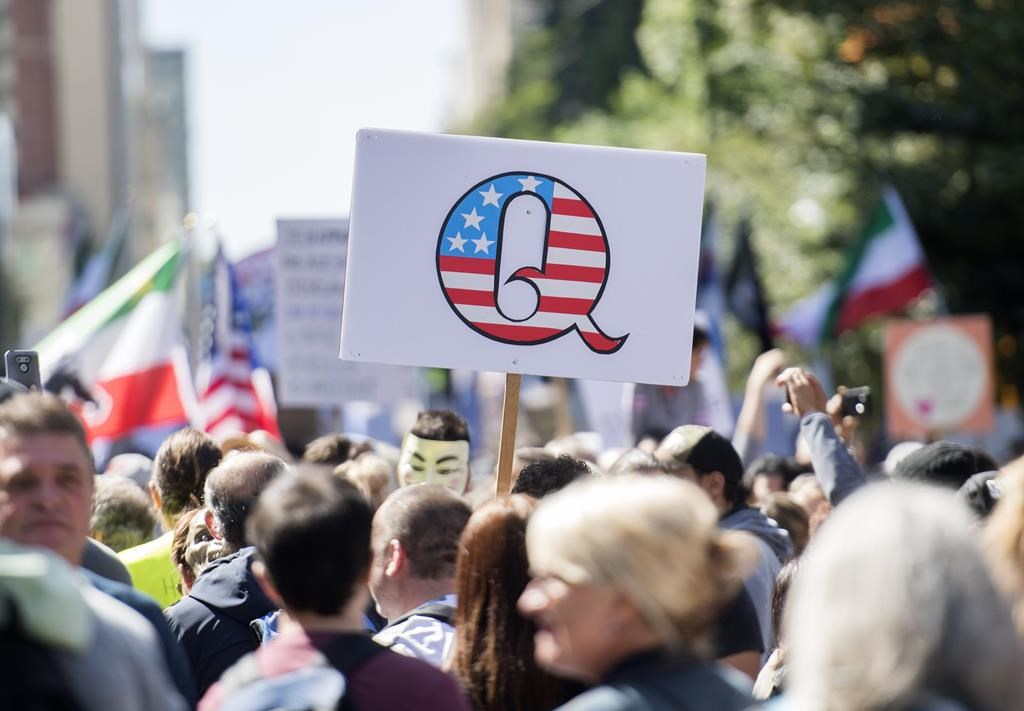 People take part in a demonstration opposing the mandatory wearing of face masks in Montreal, on Saturday, Sept. 12, 2020, as the COVID-19 pandemic continues in Canada and around the world. File photo by The Canadian Press/Graham Hughes
Previous story
Next story

Conspiracy theories, including those propagated by the once-fringe QAnon movement, have gained traction as the COVID-19 pandemic fuels fear, social and economic insecurity, and mistrust in authorities, experts in Canada say.

The reach and visibility of QAnon have grown as its followers' beliefs mix with misinformation and debunked claims related to the pandemic, said Amarnath Amarasingam, a fellow with the Global Network on Extremism and Technology and a professor in the school of religion at Queen's University.

It's hard to say where the discredited QAnon belief system begins and ends, he said, describing it as a multifaceted conspiracy theory that's become increasingly overarching since the first so-called "Q drop," a post by an anonymous user called Q on the online forum 4chan in late 2017.

QAnon draws on and fuels an array of beliefs, he said, from anti-Semitism to white nationalism to the idea that U.S. President Donald Trump is secretly working to take down a cabal of corrupt, Satan-worshipping liberal elites who are abusing and trafficking children for sex.

It's so absurd it should be the perfect conspiracy theory to ignore, said Amarasingam.

But Trump's refusal to denounce QAnon has pushed it into the mainstream, where its ideas are being cherry-picked and sprinkled throughout various movements, including those opposing public health rules aimed at fighting the spread of COVID-19, he said.

QAnon has become almost "socio-religious," said Amarasingam, as some believers view Q as a prophet who arrived to wake up the sleeping masses. At the same time, Q's posts are often cryptic and vague, empowering followers to find meaning and apply it to their local concerns.

That makes QAnon nimble. It's most prevalent in the U.S., he said, but signs of QAnon have cropped up online or at rallies in at least 70 countries as people take what they need and leave the rest.

"They'll take the anti-deep state stuff," he said. "But they might leave behind the satanic cabal and the child enslavement aspect."

It's as though QAnon's followers don't need Q or Trump anymore; the movement has become a parasite that feeds on broader conspiratorial thinking about "the all-powerful elite that are harming little people," he said.

Anti-mask and anti-vaccination movements are among those drawing from QAnon as a kind of "floating resource," Amarasingam said.

And Canada is not immune, he said.

QAnon message boards were set alight after Prime Minister Justin Trudeau told a United Nations conference this fall that the pandemic is an opportunity to "reset" and reimagine economic systems to address challenges such as poverty and climate change, said Amarasingam.

"They interpreted it as a kind of slip-up," he said. "Like it was showing evidence that there was this master plan at work, that COVID could have indeed been a hoax that was planned by powerful elites to then bring about all these new economic and social changes, or large-scale societal shifts."

The reframing of the fallout from the pandemic as an anti-government conspiracy theory is dangerous, said Amarasingam, because it could affect whether people get vaccinated and follow public health rules.

A report by the Institute for Strategic Dialogue, a think tank focused on extremism and polarization, found Canada is among the top four countries driving QAnon content on Twitter, alongside the United States, the U.K. and Australia.

The Manitoba man accused of breaking through a gate at the Rideau Hall near the residences of the prime minister and the Governor General this summer while heavily armed had posted QAnon-related content on social media, said Peter Smith, a researcher with the Canadian Anti-Hate Network.

An Ontario-based woman was responsible for popularizing the QAnon-related conspiracy theory that wardrobes and other furniture sold by the company Wayfair arrived with a trafficked child inside, he said.

And a web-based show run by a Montreal man who spreads QAnon content and false claims about COVID-19 is popular across French-speaking Europe, said Smith. The show was recently banned from Facebook and YouTube.

Smith said Q told followers to use "camouflage" and many moved to sites like Parler, which bills itself as the "world's premier free speech platform." Others popped up again on Facebook under names like "Cue," he said.

QAnon came alive when disinformation was already surging on social media, said Dr. Ghayda Hassan, the director of the Canadian Practitioners Network for the Prevention of Radicalization and Extremist Violence.

"The speed of access of information does not give us time to validate it," said Hassan, a clinical psychologist who also serves as co-chair on the UNESCO initiative on the prevention of violent radicalization.

And the pandemic has created conditions that stir up conspiratorial thinking, she said, including fear, social and financial insecurity, a sense of being controlled and a shaken trust in government and health authorities.

So, why do people believe in what may seem weird or insane to another?

In times of crisis, "we need to understand why this is happening, and often finding a cause involves scapegoating," she said.

QAnon relies on certain facts that exist, she added, pointing to child abuse.

"It's just how these facts are connected together that appears totally illogical to us."

Hassan said people pick and choose what makes sense to them from within the QAnon universe, spurring its growth.

"It takes on the colour of whatever discourse is prevalent in whatever area."

Hassan noted she will be watching for the effects of social isolation once COVID-19 outbreaks are under control and public health rules are relaxed.

Although we might think people will be eager to connect with each other again, she said, sometimes the opposite happens.

"That is an increase in isolation, but also a deterioration of interpersonal and social skills and capacities."

Amarasingam, meanwhile, said he's been part of discussions with major social media companies about how to tackle content related to the Islamic State and al-Qaida, which is in some ways easier to handle than misinformation.