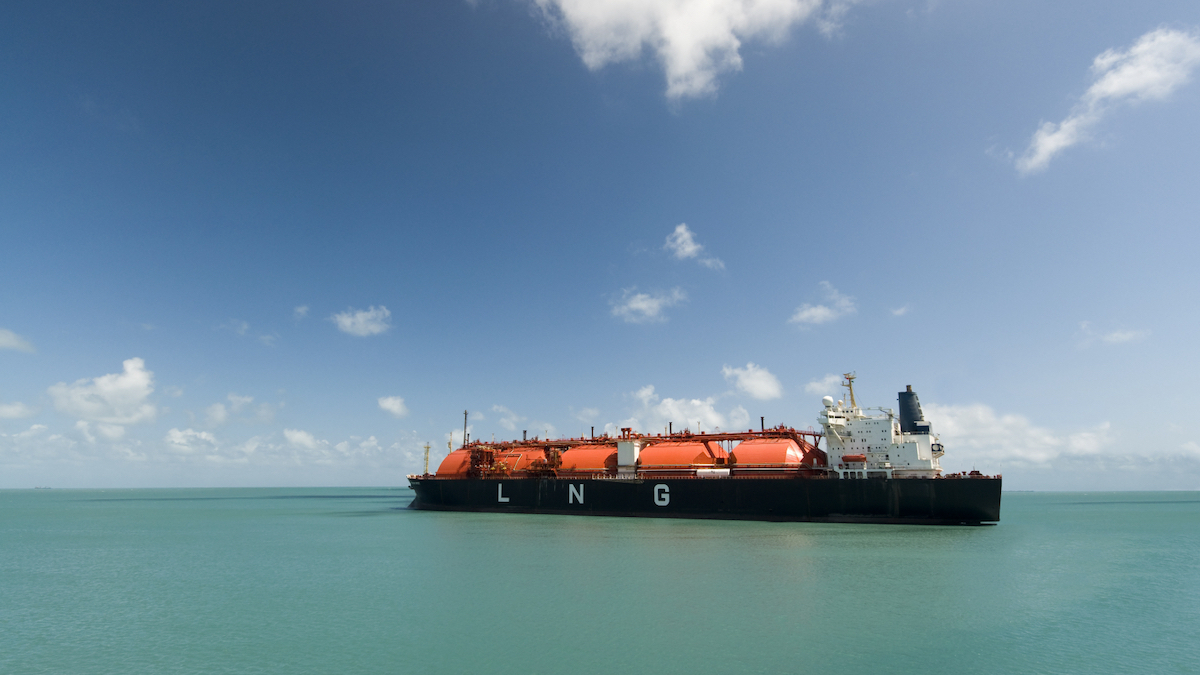 Liquefied natural gas (LNG) is lauded as a transition fuel, a replacement for coal to reduce greenhouse gas emissions and limit global warming.

The Canadian government has gone so far as to pursue a provision in the Paris climate accord to gain emissions credits, claiming that its LNG exports to Asia will help reduce air pollution there.

Unfortunately, these claims are backed by little substance.

LNG development will not only prevent Canada from meeting its emissions reduction targets, it may also be an economic non-starter due to decreased demand for fossil fuels and the increasing affordability of clean energy alternatives.

LNG is a gas that has been cooled to liquid form for easy and safe storage and transport. While LNG plants emit 50 to 60 per cent less carbon dioxide than coal plants, their carbon footprint grows substantially when emissions from the entire gas supply chain are factored in, including hydraulic fracturing (fracking), venting and leaks, which release methane, a powerful GHG with a global warming potential 86 times that of CO2 over a 20-year time frame.

Methane venting is responsible for about 20 per cent of emissions from gas production in B.C., according to the province’s Greenhouse Gas Emissions Inventory. A recent study of B.C.’s active and abandoned gas wells revealed that “almost 11 per cent of all oil and gas wells had a reported leak, together releasing 14,000 cubic metres of methane per day.”

Unfortunately, the federal government’s new methane regulations that came into effect this year will achieve only a 29 per cent reduction below the 2012 baseline level by 2025, according to the government’s own model results, and not the promised 40 to 45 per cent. The government received more bad news on Nov. 10 when federal scientists released a study that found methane emissions from the oil and gas sector are almost twice as high as emissions previously reported in Canada's National Inventory Report.

Canada is home to approximately 200,000 fracked gas wells, primarily in the West, and one operational import LNG terminal in Saint John, N.B. According to a recent report from the Canadian Centre for Policy Alternatives, “even without any LNG exports, and assuming a 15 per cent reduction in upstream emissions through reduced fugitive methane and electrification, emissions from oil and gas production alone would exceed B.C.’s 2050 target by 54 per cent.”

Yet, at a time when domestic gas is poised to undermine emissions reduction targets, the federal government is considering the development of 18 LNG export facilities — 13 in B.C. alone — which, if built, would represent an annual capacity of 216 million tons. All this, according to government and industry spokespeople, to help Asian nations reduce their GHG emissions.

"As the next 10 years are critical in keeping global warming below a rise of 1.5 C, why is Canada investing in yet another fossil fuel when cleaner alternatives are at our disposal?" asks Beth Lorimer of @kairoscanada

Canadian governments and industry also claim that carbon capture and sequestration (CCS) will help limit the impact of LNG emissions in Canada. Current CCS technology is designed to separate CO2 from other gases produced at downstream facilities, such as coal and gas power plants. However, large-scale CCS operations have struggled to succeed despite decades of research. How CCS will resolve methane leakage from upstream operations also remains to be seen.

Eighty-five per cent of known reserves of oil, gas and coal must remain in the ground to have a 50 per cent chance of limiting global warming to 1.5 C, according to an Oil Change International study, which concludes that “no new oilfields, gas fields, or coal mines should be developed anywhere in the world beyond those that are already in use or under construction.”

And yet, industry and the Canadian governments view gas as the only affordable option to replace coal on a large scale in the short term, a view refuted by several international agencies, including the Institute for Energy Economics and Financial Analysis, which writes that a substantial increase in global export capacity is outpacing demand.

The COVID-19 pandemic has further amplified this problem and could have long-lasting impacts on the gas market, according to the International Energy Agency and Global Energy Monitor.

As the next 10 years are critical in keeping global warming below a rise of 1.5 C, why is Canada investing in yet another fossil fuel when cleaner alternatives are at our disposal? The renewable energy age is upon us. The future is here. It is high time that Canada catches up to it.

LNG is just the latest

LNG is just the latest climate scam -- brought to you by the BC NDP and Trudeau's Liberals.
The claim that LNG will displace coal in Asia is extremely dubious. A deceptive marketing ploy engineered by the gas industry itself.
*
"Disputed environmental claim championed by Tories comes from Shell insider" (National Observer)
• https://www.nationalobserver.com/2020/03/04/news/disputed-environmental-...
*
Natural gas burns cleaner than coal, but it's no improvement on the climate front if fugitive emissions exceed a low threshold.
*
"'Clean' natural gas is actually the new coal, report says" (CBC)
"New studies have shown there is significantly more fugitive gas than studies showed 5 years ago, and the gas is also a bigger contributor to climate change than was understood."
• https://www.cbc.ca/news/business/lng-climate-investment-1.5192148
*
2014 study in Nature: "Market-driven increases in global supplies of unconventional natural gas do not discernibly reduce the trajectory of greenhouse gas emissions or climate forcing."
"Limited impact on decadal-scale climate change from increased use of natural gas" (Nature)
• www.nature.com/articles/nature13837
*
"Whether natural gas has lower life cycle GHG emissions than coal and oil depends on the assumed leakage rate, the global warming potential of methane over different time frames, the energy conversion efficiency, and other factors. One recent study found that methane losses must be kept below 3.2% for natural gas power plants to have lower life cycle emissions than new coal plants over short time frames of 20 years or fewer."
"Environmental Impacts of Natural Gas" (Union of Concerned Scientists)
• www.ucsusa.org/clean-energy/coal-and-other-fossil-fuels/environmental-im...
*
"Natural gas, long promoted as a “clean” alternative to other fossil fuels, may not be so clean after all. That’s because its main ingredient, the potent greenhouse gas methane, has been leaking from oil and gas facilities at far higher rates than governmental regulators claim. A new study finds that in the United States, such leaks have nearly doubled the climate impact of natural gas, causing warming on par with carbon dioxide-emitting coal plants for two decades.
"…The U.S. Environmental Protection Agency (EPA) is presenting too rosy of a picture of natural gas emissions, understating industry methane leaks by approximately 60%."
"Natural gas could warm the planet as much as coal in the short term" (American Association for the Advancement of Science)
• www.sciencemag.org/news/2018/06/natural-gas-could-warm-planet-much-coal-...
*
"There is no evidence that LNG [from Canada] will replace coal in Asia. … LNG will also likely displace nuclear power, renewables, and natural gas from other sources in many importing countries. There are many locations where LNG consumption would be additional to coal consumption, instead of replacing it. Importantly, GHG emissions from fracking, transport, liquefaction, and regasification significantly reduce LNG’s GHG benefits over coal."
"Unjustified adverse greenhouse gas impacts of the Pacific Northwest LNG proposal"
• media.wix.com/ugd/f85bab_86eaddc3c8f04f5f967f0a5ccb333cda.pdf

"LNG facility will prolong China's reliance on fossil fuels, Mark Z. Jacobson says" (National Observer)
• https://www.nationalobserver.com/2018/10/18/news/lng-facility-will-prolo...
*
"Gas is such a bargain that it’s being viewed less as a bridge fossil fuel, driving the world away from dirtier coal toward a clean-energy future, and more as a hurdle that could slow the trip down. Some forecasters are predicting prices will stay low for years, making it tough for states, cities and utilities to achieve their goals of being zero-carbon in power production by 2050 or earlier.
"…The flood of inexpensive gas … is also squeezing margins for nuclear reactors, which are the U.S.’s biggest source of carbon-free power. And it’s driving utilities to lay down infrastructure that could ensure gas remains central to the power mix for decades.
"Solar and wind are certainly winning in many markets on price alone. Without cheap gas, though, the renewables build-out would be faster."
"Cheap Gas Imperils Climate Fight by Undercutting Wind and Solar" (Bloomberg, Feb 14, 2020)
• https://www.bloomberg.com/news/articles/2020-02-14/solar-and-wind-power-...
*
"Global climate change experts urging Canada to reject Pacific NorthWest LNG proposal" (BNN Bloomberg)
• www.bnn.ca/global-climate-change-experts-urging-canada-to-reject-pacific...
*
"Green Myths Canada’s LNG Sales Force Tells the World" (The Tyee)
"No, methane’s no fix for global coal-fired energy. Here’s why."
"One significant 2018 study measured methane leaks at 60 oil & gas sites near Red Deer, AB. It found emissions at ground level were 15x higher than industry reported to regulators and Canada’s national inventory for tracking methane emissions."
"...David Hughes, one of Canada’s foremost energy analysts, recently did the math on life cycle methane emissions from B.C. LNG and new coal plants in China. He found that 'best-technology coal would have 19.2% fewer emissions at 20 years than B.C. LNG.'
"In other words, 'B.C. LNG used to generate electricity in China compared to best-technology coal would increase global emissions, thereby exacerbating an already extremely serious climate problem.'"
• https://thetyee.ca/Analysis/2020/01/23/Canada-LNG-Sales-Force-Green-Myths/
*
"Global boom in natural gas is undermining climate change action: report" (CP)
"A 1.5 C goal would require a global cut in natural gas of 15 per cent by 2030 and 43 per cent by 2050. If all the current proposed projects are built, natural gas supply will instead triple by 2030."
• https://calgaryherald.com/pmn/news-pmn/canada-news-pmn/global-boom-in-na...
*
"More natural gas isn’t a 'middle ground' — it’s a climate disaster" (Vox, May 30, 2019)
Methane leakage may make natural gas as bad as coal, but it’s not the reason gas has no future.
None of the five arguments against natural gas rely on any particular estimate of leakage. All of them would apply even if natural gas achieved zero leakage (which is impossible). The same is true regarding the local environmental impacts of natural gas production (air pollution, habitat loss, earthquakes) — they are dreadful, but even if they were eliminated, the following arguments would still apply:
1) Gas breaks the carbon budget
2) Coal-to-gas switching doesn’t cut it
3) Bulk renewables can displace both coal and gas
4) Gas isn’t needed for grid reliability
5) New natural gas infrastructure locks in carbon
https://www.vox.com/energy-and-environment/2019/5/30/18643819/climate-ch...
*
Burning the Gas ‘Bridge Fuel’ Myth: Why Gas Is Not Clean, Cheap, or Necessary
http://priceofoil.org/gas-is-not-a-bridge-fuel
Oil Change International, May 30, 2019
*
A decades-long surge in natural gas does not align with global goals to keep warming below 2 C. If govts around the world implement strong climate policy, natural gas would have to decline within a decade or two. Not a long-term solution.
*
An ounce of prevention...
Carbon capture is not cost-effective. Billions of dollars and huge govt subsidies to capture a tiny amount of CO2.
CCS does not cut emissions at the consumer end (tailpipe), where most emissions occur. Does not limit fossil fuel pollution.