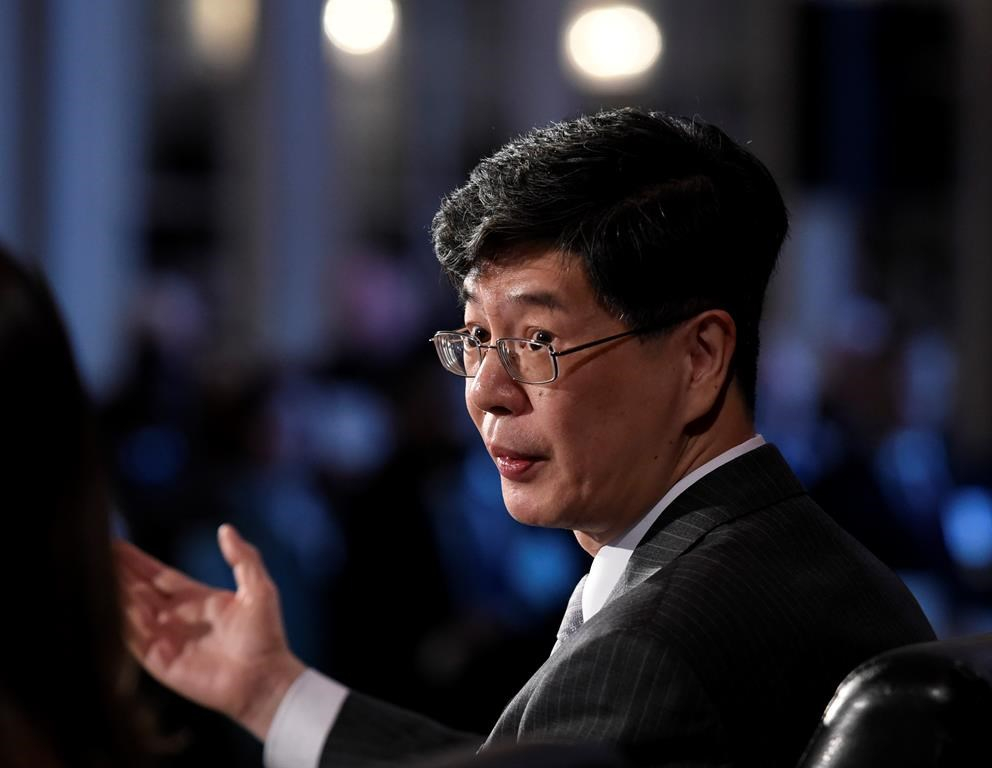 Ambassador of China to Canada Cong Peiwu speaks as part of a panel at the Ottawa Conference on Security and Defence in Ottawa, on Wednesday, March 4, 2020. File photo by The Canadian Press/Justin Tang
Previous story
Next story

As Michael Kovrig and Michael Spavor began their third year in Chinese prisons on Friday, the grievances between Canada and China deepened, dimming hope the two Canadian men would win freedom any time soon.

Meng's Dec. 1, 2018 arrest at Vancouver's airport, at the request of the U.S. Justice Department, was followed by China's seizing Kovrig and Spavor nine days later and charging them with espionage-related offences. Canada's relations with its second-largest trading partner have since plunged to an all-time low, as the country found itself caught in the crossfire between China and the U.S.

In an interview Friday, China's envoy to Canada, Cong Peiwu said Canada must release Meng, who he says is being arbitrarily and unjustly detained by Canada, or Canada-China relations won't be able to return to normal.

Cong said Canada is bearing the responsibility of being an "accomplice" in the American effort to undermine China's high-tech prowess by targeting Meng, the daughter of the founder of China's Huawei Technologies and the company's chief financial officer, as it competes for its slice of the world market in delivering the next generation of 5G internet.

"I once again point out that it is entirely out of the U.S. government's political agenda to suppress Chinese high-tech enterprises, and Canada played a very disgraceful role in this process. This is, in every way, a grave political incident," said Cong.

Cong suggested that even if Meng is released, there are no guarantees that Korvig and Spavor would be granted their own freedom in return.

That scenario has been raised as a possibility because Prime Minister Justin Trudeau recently spoke to U.S. president-elect Joe Biden about Kovrig and Spavor, fuelling speculation that if the U.S. revisited the merits of the Meng case and withdrew the charges, she could go free in Canada, potentially placating China.

"As we have repeatedly pointed out," said Cong, "those cases are not connected as some here suggest."

As Michael #Kovrig and Michael #Spavor began their third year in Chinese prisons on Dec. 11, 2020, the grievances between #Canada and #China deepened, dimming hope the two Canadian men would win freedom any time soon. #twomichaels #cdnpoli

China confirmed Thursday that Kovrig and Spavor would face national security trials, but Cong could provide no further details on when or how that legal proceeding would unfold.

Trudeau shot back at China Friday, once again calling on the People's Republic to release the Michaels.

"They were arbitrarily detained in retaliation for Canada, living up to our rule of law, living up to long-standing international treaties with our closest ally. And it is simply an example of coercive diplomacy," Trudeau said an outdoor event in Ottawa.

"And I can say that we are also extremely well-supported by allies near and far, around the world, who have been consistently speaking up in defence of these two Canadians, both because they support Canada, but also because they, too, have real concerns about the way China has been using arbitrary detentions and coercive diplomacy to try and reach various ends."

The sanctions, named after the Russian whistleblower Sergey Magnitsky, target individuals who are seen to have violated human rights. The sanctions can include travel bans and the seizure of assets.

"This kind of sanction, it won't work, and it's not the proper way for the handling of diplomacy. So that's against the basic norms covering international relations,” said Cong.

"You can see it's not China who is making the provocation, but rather, is some forces here who would like to be engaged in this kind of activity.”

Cong said Kovrig and Spavor are being treated well, like every prisoner who faces charges of violating China's national security, something he said his country takes very seriously.

Asked if he had anything to offer to the concerned families of Korvig and Spavor, he replied:

"As we always state: that the competent authorities are handling the case independently and in accordance with law, and their lawful rights are protected."