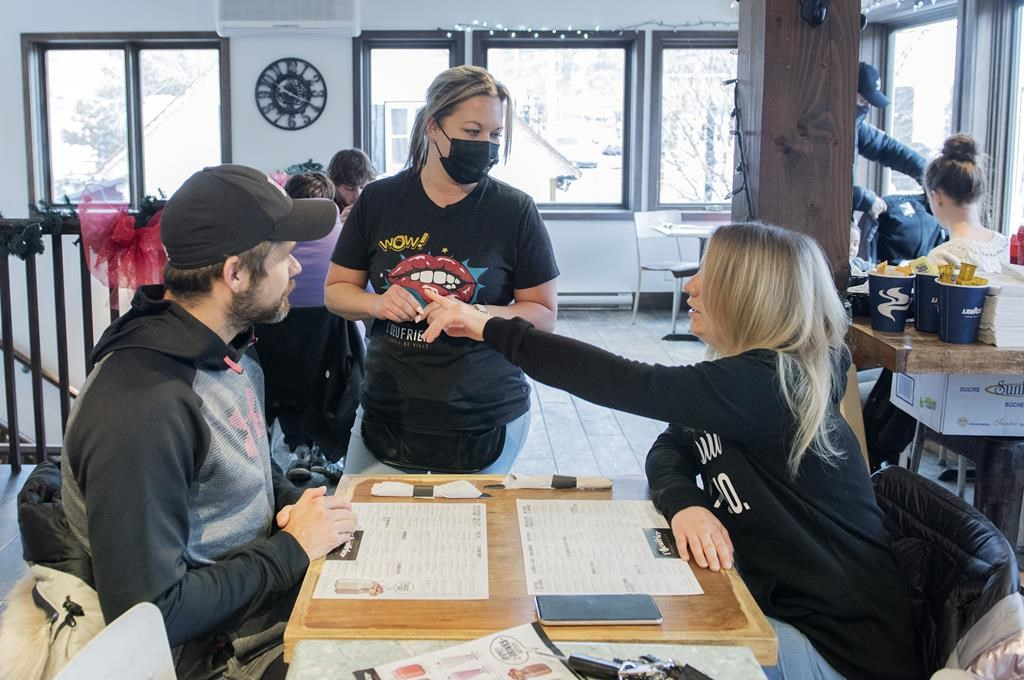 Kim Poirier takes an order from customers at a restaurant in Saint-Sauveur, Que., on Saturday, December 12, 2020, as the COVID-19 pandemic continues in Canada and around the world. Photo by The Canadian Press/Graham Hughes
Previous story
Next story

Health Canada warned Saturday that people allergic to ingredients in the COVID-19 vaccine should forego getting the shots, days before inoculations are scheduled to begin in this country.

The federal agency's warning comes after two people in the United Kingdom suffered severe reactions to the Pfizer-BioNTech vaccine and recovered. Both had histories of severe allergic reactions and carried epi-pens, Health Canada said in a written statement.

"Health Canada has reviewed the available evidence and has concluded that the current (prescribing information) and available public health guidance are appropriate, and is not recommending any changes to the product's use at this time," the statement reads, adding that it will take action if any new safety issues are confirmed.

But it is warning that those with severe allergies should talk to their doctors before receiving a shot.

"In Canada, all vaccines carry a warning about the risk of serious allergic reactions, including anaphylaxis," the release said. "Immunization clinics are equipped to manage these rare events."

Quebec's Health Department has said it plans to start vaccinating residents of two long-term care homes -- one in Montreal and one in Quebec City -- on Monday, while several other provinces are set to begin vaccinating health-care workers on Tuesday and Wednesday.

As it stands, Canadian soldiers are preparing for the vaccine's arrival, Procurement Minister Anita Anand said on Twitter.

She tweeted photos of soldiers loading a large box onto a plane, which her press secretary said contained vaccine freezers destined for the North.

Meanwhile, the Department of National Defence said Saturday that it was sending reinforcements to a remote First Nation in northern Manitoba that's gripped by a COVID-19 outbreak.

Roughly a quarter of Shamattawa First Nation's population has tested positive for COVID-19.

Eleven soldiers arrived in the fly-in community earlier this week following the arrival of a group of Canadian Rangers, the Department of National Defence said in a statement.

The troops are there to provide logistical support and help distribute needed goods, the department said.

Cases of COVID-19 were up significantly again across Canada on Saturday. Nationally, 6,772 infections were reported from 81,481 completed tests on Friday, for a positivity rate of 8.3 per cent.

The measures mean bars, restaurant dining rooms and indoor sports facilities must close, while private gatherings and indoor public events are banned. Non-essential shopping will be limited to curbside pickup.

The province said it hopes to begin vaccinating around 900 health-care workers in critical, acute and long-term care units on Wednesday.

Saskatchewan reported 274 new cases of COVID-19 Saturday and 11 deaths associated with the virus.

Authorities in the province said there are nearly 120 people in hospital, with 23 in intensive care.

Newfoundland and Labrador reported three new infections, while officials in New Brunswick reported one new case, with 72 still active in the province and four people in hospital.

In Nova Scotia, health authorities urged residents near a poultry plant in Berwick to get tested for COVID-19. The Eden Valley Poultry plant has closed for at least two weeks after four cases of the virus were detected.

All of those cases were travel-related, the province's top doctor said.

There are currently 17 active cases in the province.

The Public Health Agency of Canada said Saturday that there are currently 73,297 active cases in Canada, with an average of 6,543 daily new cases reported between Dec. 4 and Dec. 10.

Canada reported an average of 100 deaths associated with the virus each day during that period, it said.

"Nationally, we remain in a rapid growth trajectory. The latest longer range forecasting, using a model from Simon Fraser University, forecasts that we could have 12,000 cases daily by the beginning of January." the agency said.

This report by The Canadian Press was first published Dec. 12, 2020.