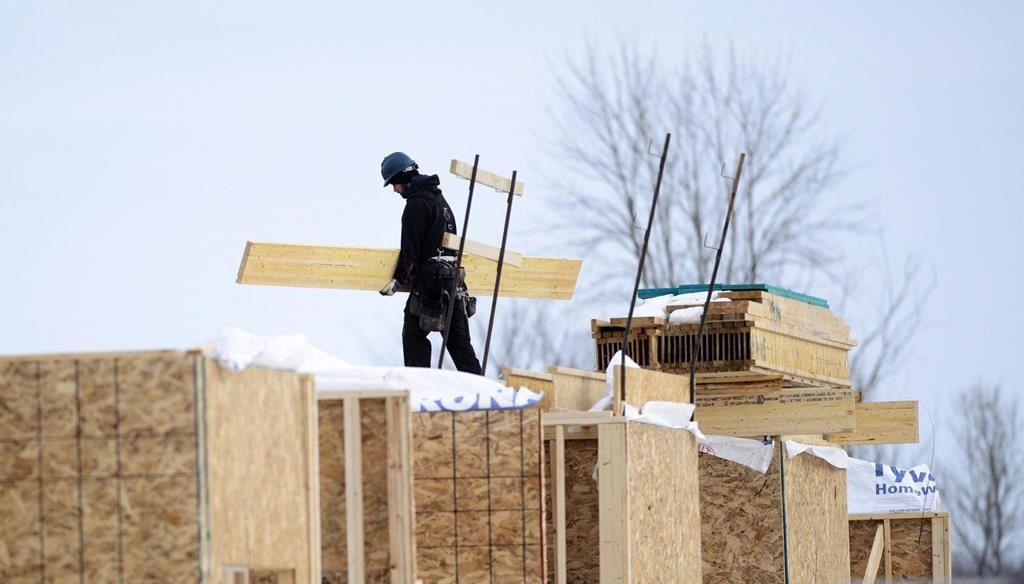 A worker carries wood as a house under construction is shown in a new subdivision in Beckwith, Ont., on January 11, 2018. File photo by The Canadian Press/Sean Kilpatrick
Previous story
Next story

But the CHBA also warned regulators must be careful not to raise housing costs too steeply when updating the building code, which could outlast incentive programs and make renovations more expensive down the line.

The government announced a plan to address climate change on Friday, a step toward its goal of lowering greenhouse gas emissions by up to 40 per cent between 2005 and 2030. The plan targets several industries, such as transportation and energy, but also pledges $2.6 billion over seven years to homeowners.

Among the potential changes are $5,000 grants for homeowners, free EnerGuide assessments, and a new model code for retrofitting homes with green technology.

The free assessments are also helpful for homeowners, who are sometimes deterred by big-ticket items like windows and overlook low-cost renovations, like attic insulation, that can save them money on energy bills, Lee says.

"I think the education and energy literacy that comes along with this type of programming is very important," Lee says, adding that the advisers can show people the potential of how to get the best return on investment in terms of saving on energy costs.

"If they have the budget, and they can do it over many years, which is the nice thing about the way the program's laid out. That offers a heck of a lot to today's homeowner rather than just a flat out, 'Here's a few bucks to do a little bit of work."

The CHBA qualifies builders to construct net zero homes and espouses their perks — in addition to producing as much clean energy as they consume, net zero homes are quieter, hypoallergenic and save water, the association says. But Lee says that net zero housing is still more expensive to build, and making it mandatory too quickly could raise the price of new homes and tempt homeowners to cut corners on renovations down the road.

"Having that eye on what's technically and economically feasible is really critical, especially when it comes to regulation, because now you're talking about every home having to be built that way," Lee says.

"When you put it into code, you need to be sure that you're finding ways to do it in affordable fashion. That's usually our concern when it comes to building codes going too fast: making sure you're getting the technical stuff right."

The risk, says Lee, is that a homeowner hoping to replace the siding on their house might be put off by a rule that requires new insulation — and end up either scrapping the project altogether, or going without a permit. Lee says that it's important that Canada supports research and innovation around green building, so costs will go down by the time the new rules are codified.

"Under-the-table cash jobs, not having warranties when you don't have proper contracts and proper permitting — that could be a big problem," says Lee.

"When it comes to doing a renovation, homeowners are much more in tune with how much things cost and how much adding costs. Getting the retrofit code right is going to be tricky, because it will inherently mean additional costs."

Minister McKenna on the anniversary of the Paris climate agreement