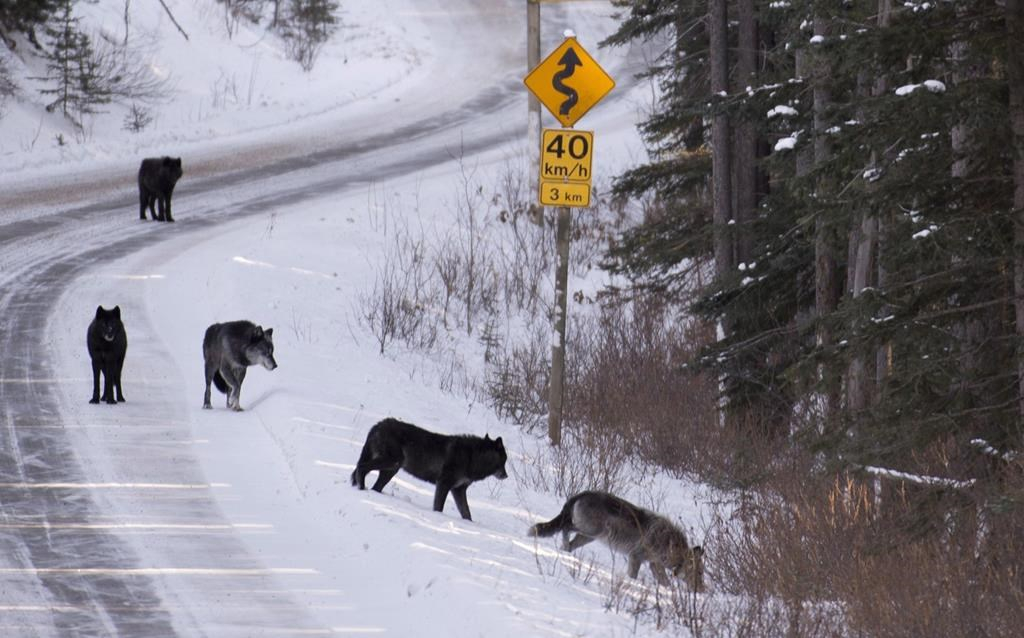 Animal advocates have asked the federal health minister to review a decision that allows Alberta to keep using strychnine to poison wolves in an ongoing effort to preserve caribou herds.

Wolf Awareness and Animal Justice filed the request with Health Canada earlier this week, along with accusations that Alberta is breaking the terms governing use of the toxin and endangering other wildlife.

"These products are not environmentally responsible," said Kaitlyn Mitchell, a lawyer with Animal Justice. "The evidence of non-compliance with legal restrictions further underscores the point we can't be using these in Canada in a responsible way."

Alberta officials deny misusing strychnine and say its use is essential to keep caribou on the landscape.

Last March, Health Canada's Pest Management Regulatory Agency renewed permission for Alberta to keep placing strychnine-laced bait in caribou habitat to reduce the number of wolves that prey on the endangered herds. Between 2005 and 2018, Alberta killed 225 wolves with strychnine in addition to deaths from aerial gunning.

Legislation allows for a review by the minister in light of new evidence. Animal Justice and Wolf Awareness say documents obtained under freedom of information provide that evidence.

Conditions stipulate that bait sites must be checked every seven days to ensure carcasses don't poison other animals and the toxin doesn't enter the environment. Records show that in 2018, the average time between checks at 19 sites was nearly nine days, including one stretch of two weeks.

The request also alleges that Alberta is leaving out more poison than the 12 baits per site the rules allow. It quotes government records saying 20 baits were left out at almost all the sites.

The request adds that site inspections and cleanup — important to ensure strychnine is removed from the landscape — were also inadequate.

"More than 20 per cent of strychnine bait sites were not able to be inspected, either adequately or at all, for up to three months after sites were deemed closed due to local flooding," the request says.

Health Canada has not said whether it will grant the review request.

Dave Hervieux, a longtime caribou expert with Alberta Environment, said bait sites are often tough to reach in winter when the strychnine is placed.

"Seven days is what we strive to achieve. In the vast majority of (cases), we do achieve that. I don't know what the negative implications would be of missing the seven days by a day or two."

Hervieux said poison is the only option for wolf control at the remote sites, which are only accessible by air. He also doubted Alberta Environment is setting out too much poison.

Hervieux acknowledges more non-wolves than wolves are killed by strychnine, a poison widely banned around the world and considered by veterinarians to deliver an excruciatingly painful death.

But there's little choice on a landscape where caribou habitat has been heavily disturbed by decades of logging and oil and gas activity, he said. Habitat restoration takes time, he said, and caribou need help now.

"We are trying to avoid the extirpation of an iconic species — caribou — that is in trouble entirely because of our activities," Hervieux said.

"I get it that it's not OK to kill a dozen ravens. But the real question is shall we try to make this situation right, protect these animals — caribou — so that they can exist and benefit from improved habitat conditions into the future, or shall we not?"

This report by The Canadian Press was first published Dec. 18, 2020.

"Ethical" oil?
Caribou extirpated. Wolves shot and poisoned. Untold collateral damage.
That's the cost of "responsible" oilsands development.
*
AB's wolf cull practices include the use of lethal snares, leghold traps, aerial shooting, and strychnine poisoning.
Strychnine is an 'indiscriminate killer'.
About 1,200 wolves have been culled since the population control program began in 2005. (2018)
At least 250 other animals have also been accidentally poisoned, according to the AB Govt.
Those numbers fail to fully account for animals killed by feeding on the carcasses of poisoned wolves.
Contrary to guidelines, carcasses contaminated with poison are left to rot and endanger other wildlife.
Health Canada has received reports that the poison has led to the deaths of a badger, a weasel, foxes, antelopes, dogs, deer, horses, a bear cub, mice, rats, moles and various birds.
Notley's NDP Govt had a chance to stop this slaughter, and she refused.
"'Indiscriminate killer': New documentary condemns poisoning of Alberta wolves" (Dec 03, 2018)
https://www.cbc.ca/news/canada/edmonton/documentary-poisoned-wolves-albe...
*
Dave Hervieux, Alberta Environment: "Habitat restoration takes time, he said, and caribou need help now."
Hervieux's response is disingenuous. The AB Govt is doing little or nothing to restore habitat. Meanwhile, oilsands "development" expands its footprint.
Industry and govt are running out the clock on AB's endangered caribou herds, while shooting and poisoning wolves.

"Unethical Oil: Why Is Canada

"Unethical Oil: Why Is Canada Killing Wolves and Muzzling Scientists To Protect Tar Sands Interests?
"In the latest and perhaps most astonishing display of the tar sands industry’s attacks on science and our democracy, the government of Alberta has made plans to initiate a large-scale wolf slaughter to provide cover for the destruction wrought by the industrialization of the boreal forest ecosystem.
"In the coming years, an anticipated 6,000 wolves will be gunned down from helicopters above, or killed by poison strychnine bait planted deep in the forest. Biologists and other experts say the cull is misguided, and that their studies have been ignored or suppressed. Worse, they warn that although the government is framing the wolf cull as a temporary measure, it has no foreseeable end." (Desmogblog 2012)
"Unethical Oil: Why Is Canada Killing Wolves and Muzzling Scientists To Protect Tar Sands Interests?"
Carol Linnitt, February 14, 2012
• https://www.desmogblog.com/unethical-oil-why-canada-killing-wolves-and-m...
*
"Using poison to cull wolves in Alberta is inhumane, says animal advocacy group
"1,200 wolves and about 250 other animals have been killed since the program began in 2005
"A conservation group says the province's use of poison as a way to cull wolves is inhumane and kills too many other animals inadvertently.
"About 250 other animals have also been accidentally poisoned, according to the Alberta government.
"Most of those are ravens but the list includes among other creatures a bald eagle, a golden eagle, coyotes, foxes, skunks, lynx and a grizzly bear, which is listed as a threatened species under Alberta's Wildlife Act.
"That death tally doesn't include the bait animals. An animal such as a moose or deer is shot, then the carcass is poisoned, said veterinarian Judith Sampson-French, a former conservation biologist with Alberta Fish and Wildlife.
"Animals besides wolves feed on the carcass and are subsequently killed too, which Wolf Awareness Inc. calls unethical and inhumane.
"'Some people are calling it a grand-scaled wildlife genocide because it's very non-targeted,' said Sampson-French.
"'The whole ecosystem is starting to break down because we're getting way beyond ravens dying here, we're getting caribou, we're getting grizzly bears, eagles, cougars, all of those animals.'
"Judit Smits, a veterinarian with a PhD in environmental toxicology, said the use of strychnine as a poison is especially troubling.
"'We've been really discouraging the use of strychnine for predator control a long time because we are really aware of how totally inhumane it is,' she said.
"'It takes a long time to die. The animals are completely lucid throughout the whole poisoning episode,' she said.
"Strychnine causes the animal's muscles to contract, said Smits, including the diaphragm, which eventually suffocates them.
"The province also uses firearms and poison to kill the wolves.'"
• www.cbc.ca/news/canada/calgary/alberta-wolf-cull-animals-poison-1.4388721

This context is appreciated.

This context is appreciated. It should have been in the article.
Also, why are no politicians interviewed?