Health Canada has what it needs to decide on Moderna vaccine 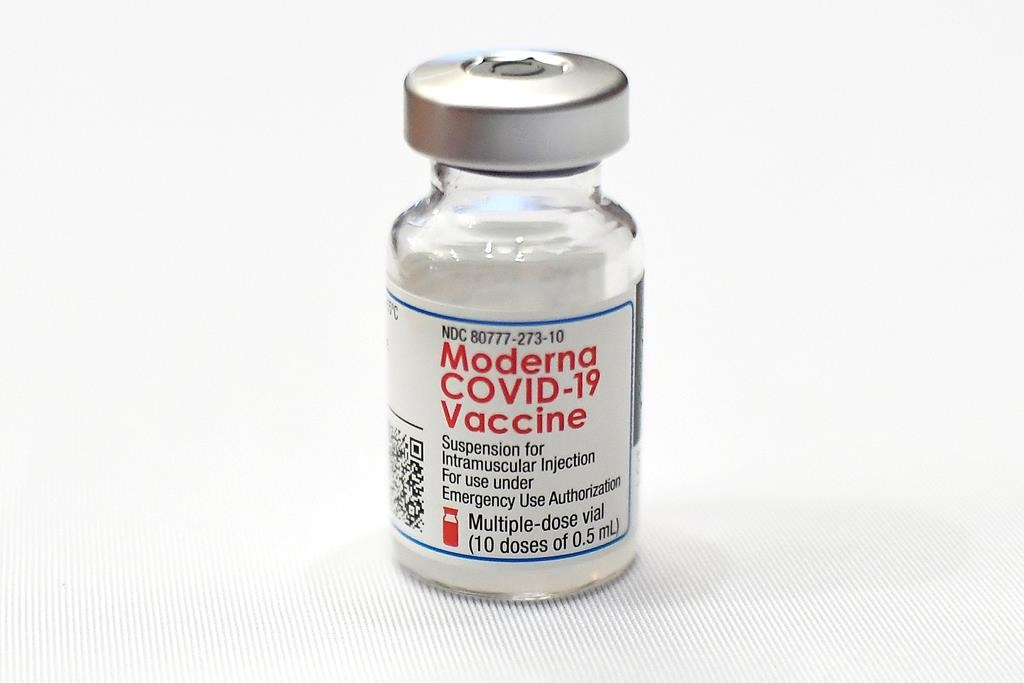 A vial of Moderna's COVID-19 vaccine is seen at Hartford Hospital, on Monday, Dec. 21, 2020, in Hartford, Conn. Photo by Associated Press/Jessica Hill
Previous story
Next story

Health Canada says it will "soon" be ready to announce if it can authorize a second COVID-19 vaccine after receiving final documents from U.S. biotech firm Moderna over the weekend.

"Everybody worked really diligently all weekend," Patricia Gauthier told The Canadian Press in an interview Monday.

She said the process is following the required course and "we're hoping for a decision when Health Canada is ready."

Eric Morrissette, a spokesman for Health Canada, said the documents are being reviewed as fast as possible.

The U.S. Food and Drug Administration issued an emergency authorization for the Moderna vaccine late last week, becoming the first country to approve it. The COVID-19 vaccine is also the first Moderna product ever authorized for use.

The company was established about a decade ago specifically to work on messenger RNA technology, or mRNA.

The final documents Health Canada needed included data on manufacturing. The Canadian doses of Moderna's vaccine are being made in Switzerland and sent to Spain for the "fill and finish" process, where six doses will be filled into each vial and the vials packed into freezers for shipping.

As many as 110,000 doses can be transported on a single pallet. Moderna intends to start shipping its vaccine to Canada within 48 hours of approval, with as many as 168,000 doses anticipated before the end of December and two million by the end of March.

#HealthCanada says it will "soon" be ready to announce if it can authorize a second #COVID19 #vaccine after receiving final documents from U.S. biotech firm #Moderna over the weekend.

Gauthier said that is enough to vaccinate two-thirds of the Canadian adult population, and that there are still 16 million doses remaining for Canada to potentially buy as part of the contract. Sources not authorized to speak on the matter tell The Canadian Press a decision on whether to buy those extra doses will likely be announced this week.

The Moderna vaccine is only recommended for use on adults over the age of 18. Gauthier said clinical trials on adolescents began earlier this month and the vaccine will be tested on younger children in 2021.

Health Canada approved a vaccine from Pfizer-BioNTech on Dec. 9 and vaccinations with that product began last week. It was about five days from the time the final documents were received until Pfizer got a green light, but Health Canada's chief medical adviser Dr. Supriya Sharma has said Moderna's production facilities are new to Health Canada and may take longer to review.

The vaccines from Pfizer and Moderna both use messenger RNA technology, which sends a genetic code to human cells to train them to create an immune response to COVID-19. Both drugmakers say the vaccines were more than 94 per cent effective at preventing infection.

But Pfizer's technology requires the vaccine to be kept frozen between -60 C and -80 C until just before use, requiring complex shipping processes, dry ice and ultra-low-temperature freezers.

Moderna's product can be kept stable at only -20 C and can be at room temperature for almost a month. The company said last week that where it is necessary, the vaccine can be shipped at temperatures between 2 C and 8 C.

It means Moderna's vaccine can be more easily deployed wherever it is needed, including to the North, remote Indigenous communities and long-term care homes.

Moderna will be picked up by FedEx in Europe and shipped in freezers to Toronto, where logistics company Innomar Strategies will take possession of it.

Innomar president Guy Payette said the company will be the importer of record, run a quality assurance check on the vaccines, and then repackage the shipments into smaller amounts to be forwarded to provincial and territorial governments.

"We're working on the assumption that it is imminent, and that we need to be ready when the vaccines get approved," Payette told The Canadian Press.

Gauthier is now helping set up the Canadian division of Moderna, intending to hire a team of people whose first focus will be helping governments in Canada get the vaccine administered.

She says that includes efforts to communicate to Canadians the safety and effectiveness of the vaccine.