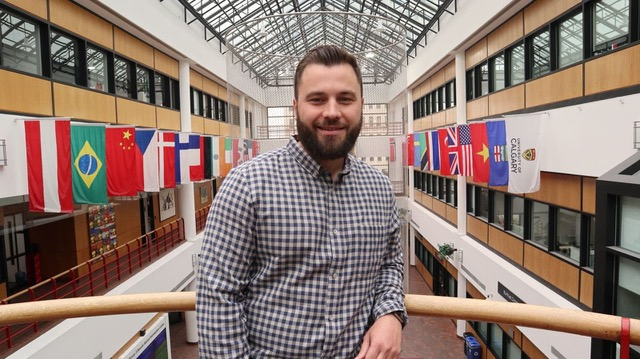 Nick Kendrick graduated from university in 2011 in Nova Scotia with significant student debt. Like a lot of his friends, he went to work in Alberta’s oilsands. Now, at 31, he has a master of science in sustainable energy development and a LEED Green Associate certificate in sustainable building practices. He is part of a project management team that supports a First Nations-run solar energy installation at Fort Chipewyan. I chatted with him at his home in Calgary.

Tell us about your work in the oil and gas industry.

I worked at a tailings pond processing plant where I improved the safety and effectiveness of the operation. I learned on the job and worked my way up to become the senior control room operator. It was important work that I liked a lot. The pay was great, and we only worked half the year.

What caused the change in your career path?

In 2016, there were a lot of layoffs. It was hard to see my friends go through that, and I could see it coming, maybe, for me. We lived in Fort McMurray, and we had to travel to see both our families and most of our friends. My wife is a dental hygienist, and she can work anywhere, but for me ... it was too uncertain. We were talking about wanting to start a family, and I wanted my nights and weekends off and some stability. It was time to make the shift.

"If you just put a toe in the water, you never know where it is going to lead. Small opportunities can become big ones." #renewableenergy #solarpower

Tell us about your pathway.

I went to the University of Calgary because it offered a program in sustainable energy development. My major research project was for Iron & Earth to map the places in Alberta likely to be facing economic downturns and match them with other places that had workers with skills that could be repurposed for renewable energy projects. I also provided forecasts of the resulting energy production and emission reductions.

The people at Iron & Earth are themselves former oil and gas workers who understand that if we are going to lessen our dependence on fossil fuels, we have to provide workers with good, steady jobs that pay well. They offer training for the transition and lobby governments to provide better funding for workers interested in switching.

I am proud that my research allows them to provide good data to support their applications.

What are you proudest of at the Fort Chipewyan installation?

This is the largest remote solar farm in Canada. Its 5,760 solar panels will supply the remote northeast Alberta community with 25 per cent of its electricity and replace 800,000 litres of diesel every year. It was 100 per cent driven by collaboration between Mikisew Cree First Nation, Athabasca Chipewyan First Nation and the Fort Chipewyan Métis Association.

I am most excited about the projects that people can see make their lives better every day. Three Nations Energy is pilot testing solar cabins. Now if you want to go to your hunting or fishing cabin, you have to take in diesel as your power source. It’s heavy, dirty, noisy, dangerous and expensive. Putting solar panels on these remote cabins means people have a year-round, clean, free, safe, quiet, energy source. Using your cabin just got a whole lot easier and more pleasant.

There is also a sustainable fresh produce farm in the first testing phase. To have fresh leafy greens in the middle of winter in Fort Chipewyan — that is really something! Eventually, the project will include aquaponics, which will allow for fish and aquaculture, as well as hardier fresh vegetables like tomatoes.

We are training locals to run these installations and be involved in the buildout. Adults may be intimidated by the climate justice crisis, but young people see opportunity. These youth see energy sovereignty and a better life with renewables than they had before.

Did the way your parents raise you influence where you are today?

My mom just had her first solar panels installed. She has been saving for a while, and it's a big deal for her. She taught me to take responsibility for the water I used and to reuse and recycle. My dad had a successful career in the coast guard, so taking care of the ocean is second nature. He went back to school and got his master’s degree on the impacts of climate change in the Arctic oceans. In his retirement, he is considering writing a PhD. He taught me the importance of always learning.

No matter where you work, I respect you for putting food on the table. But I do have to say that my life has additional meaning now. I like that. If you just put a toe in the water, you never know where it is going to lead. Small opportunities can become big ones.

How can older people support you?

The way you vote is important. Teaching the young people in your sphere of influence that we only have one Earth, that is important. And listen to them. Learn what they know. Young or old, there are always opportunities to learn more.

"No matter where you work, I

"No matter where you work, I respect you for putting food on the table."
The difference between mining carbon and mass murder as a mercenary is mostly about the delay.

Thank you for this. It's helpful (and hopeful) to see how individuals are transitioning away from being dependent on the fossil fuel industry for their livelihoods. We need to hear more stories like this. Governments should be providing financial support for education and retraining for oil and gas workers.