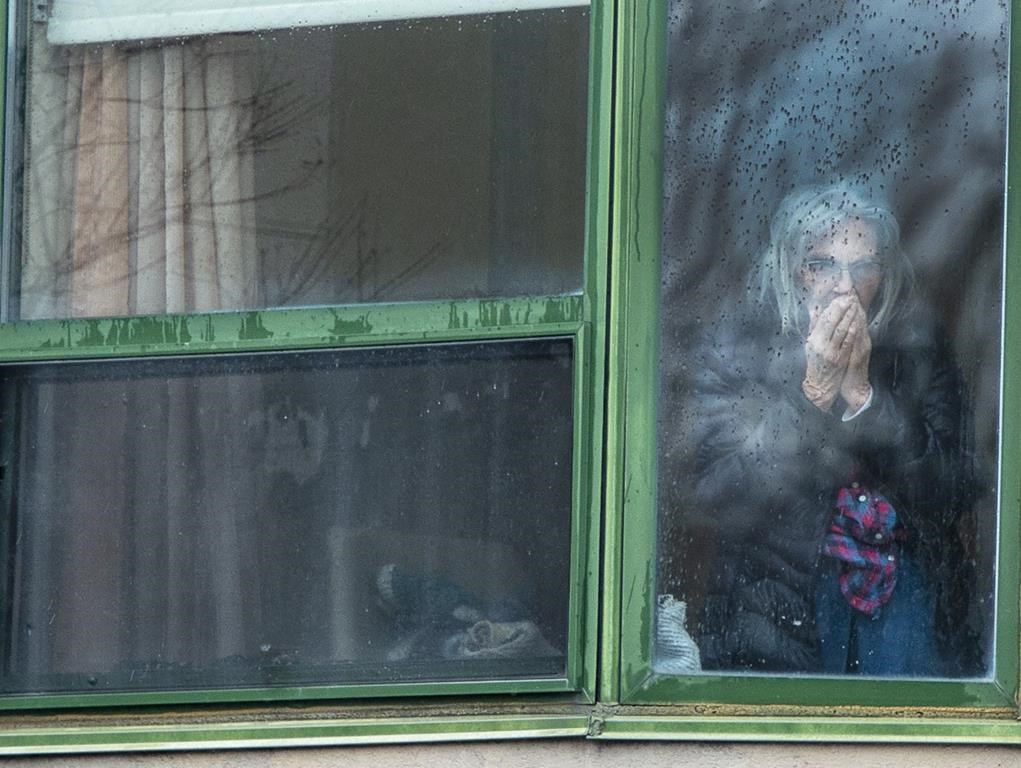 A resident looks out her window from the Herron seniors residence on April 13, 2020, in Dorval, near Montreal's Trudeau airport. File photo by The Canadian Press/Ryan Remiorz
Previous story
Next story

The COVID-19 pandemic in Quebec was marked by images from long-term care homes: isolated seniors peering out from windows, bodies in zippered bags on stretchers exiting imposing brick buildings.

The pandemic tore a destructive path through Quebec's provincially run seniors facilities, killing thousands and exposing systemic flaws in a network long understaffed, under-resourced and undersupervised. But the health crisis also provided an opportunity to re-examine Quebec's approach to long-term care and to re-evaluate models that might work better, two health experts told The Canadian Press.

"(The pandemic) was a catastrophe, but it was revelatory and it can help us to move forward," Francine Ducharme, a geriatrics researcher and nursing sciences professor at Universite de Montreal, said in a recent interview.

Ducharme helped prepare a report on long-term care for the Royal Society of Canada in 2020 indicating Canadian seniors homes have allowed staff-to-patient ratios to drop and have increasingly shifted to lower paid care aides and personal support workers, who are often given "variable and minimal formal training." Patients in those homes, however, are living longer with diseases that require increasingly complex care, such as dementia, the report found.

A separate report by Quebec's ombudswoman revealed the majority of the deaths attributed to COVID-19 in the province between March and June 2020 were among long-term residents — 3,890 in all. In some cases, ombudswoman Marie Rinfret noted, overworked staff could not meet residents' basic needs such as being fed, changed or comforted as they died.

Above all, Ducharme said, the pandemic revealed society's ageism and its lack of respect toward those who care for seniors. "We neglected our elderly people, it has to be said, and we neglected the people who worked there who are underpaid and under-considered," she said.

Long-term care centres, Ducharme added, need more professionally trained staff. She said Quebec has taken some "commendable" steps in the right direction in recent months, including hiring and training some 10,000 orderlies and ordering each care facility to appoint a manager and an infection-control specialist.

She noted, however, that finding enough skilled people to fill those roles isn't always easy, adding the new measures don't address the shortage of other kinds of professionals such as nurses and specialists.

The pandemic has also forced the government to rethink whether so many seniors need to end up in such facilities at all, according to Philippe Voyer, a professor at Universite Laval's faculty of nursing sciences.

Many other countries, he said, provide a wider variety of intermediate models that create better living environments than long-term care homes do for people who begin to lose autonomy. Those include, he said, so-called "dementia villages" in Europe and the "Green House" model in the United States, which allows seniors to live in homes of less than a dozen people.

Other models include co-ops, where groups of seniors share services with the help of government funding, Voyer said. "There are lots of models there, and you can’t count on just one, because there’s a big divergence among people," he explained.

The #COVID19 #pandemic in #Quebec should spur society to improve seniors' care homes.

The Quebec government appears to be changing its vision of senior care, he said, with its plan to open 2,600 spots in newly constructed "elder' homes" of 12 rooms each, with common rooms, health services and access to nature. Voyer says he's cautiously optimistic about the government's approach; however, he said, the plans need to be properly funded, adding that a balance needs to be struck between homeyness and health care.

He said he worries the fears caused by the pandemic will lead to buildings that look too much like hospitals. "My grain of salt is that we can give good medical care, nursing and infection control without taking away the residential feel," he said.

Both Voyer and Ducharme agree that the preferred solution for most elderly people — which also happens to be the most economical — is to stay out of care facilities altogether for as long as they can.

They said the government needs to invest much more into resources that help people stay at home: visits from health-care services and therapists, day centres and respite care, and mental health and other support for caregivers.

But no matter what resources are put in place, both Voyer and Ducharme said it's inevitable some people will end up in long-term care when their needs become too great.

Ducharme's vision for long-term care includes facilities run by competent, accountable owners and managers, filled with well-trained staff and specialists, including nurses, physiotherapists, nutritionists and palliative care experts. Buildings need to be modernized to ensure everyone has their own room, she said, adding that residents should have access to technology and recreation.

A stable personnel that understands the needs of their elderly clients is primordial to letting him live, and eventually die, with dignity, she said. "We have to think that these are humans with multiple needs, including physical, psychological, social, sexual, spiritual," she said.

"If we centre on one aspect, we forget the rest."

This report by The Canadian Press was first published Jan 4, 2021.