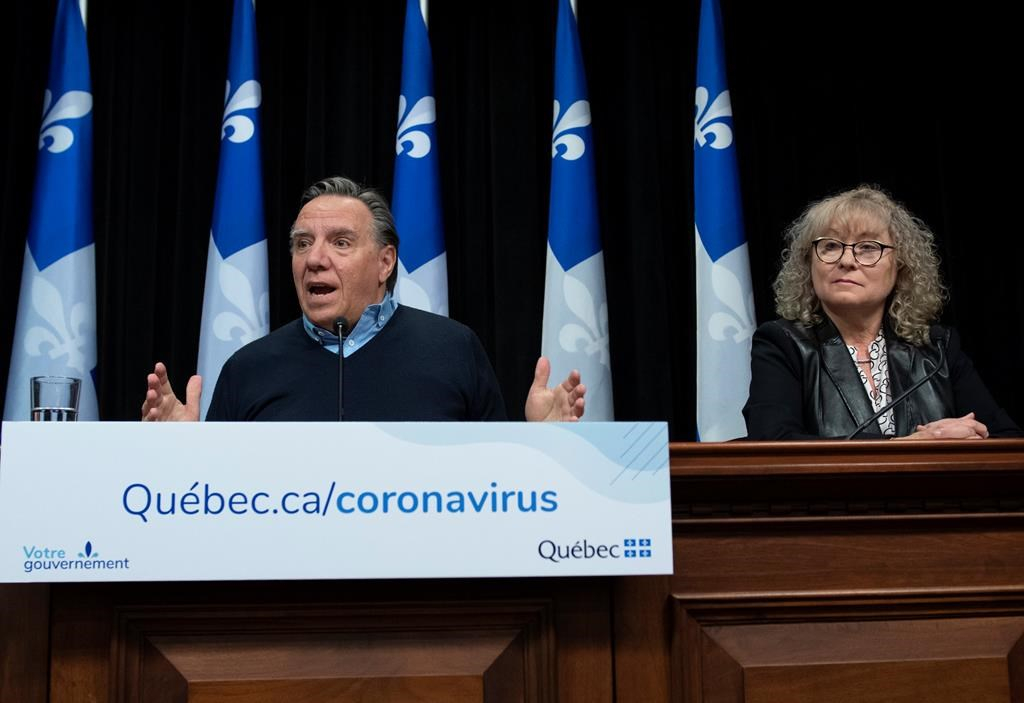 Quebec Premier Francois Legault responds to reporters during a news conference on the COVID-19 pandemic, on Monday, April 13, 2020 at the legislature in Quebec City. Photo by The Canadian Press/Jacques Boissinot
Previous story
Next story

Quebec has placed an additional five private long-term care homes under watch amid concerns that they're not able to properly respond to the COVID-19 pandemic, Premier Francois Legault said Monday.

The province carried out inspections of 40 private establishments over the weekend after learning that 31 residents died in a three-week period at a single home west of Montreal, without the province's knowledge.

Legault did not identify the potentially deficient residences but said the concerns could include understaffing, a lack of directives regarding protective equipment and management problems.

"We're monitoring, and we see they may not be in control 100 per cent, and all the directives are not in place as they should be," the premier said Monday.

These directives include meeting care needs, separating infected and healthy patients, providing enough protective equipment and making contact with the families, he added.

He said the vast majority of private residences are taking good care of patients, and some of the problems could be due to a shortage of staff that is beyond management's control.

Legault said the province will now inspect all the province's 2,600 care homes and residences, noting that in 30 of them more than 15 per cent of residents are infected with the novel coronavirus.

Legault acknowledged that many of the problems in long-term care homes are due to a lack of personnel that began long before the pandemic.

Salaries, he admitted, are too low to attract needed workers, especially in the private sector, which leaves those in place overworked.

He said the province has boosted some orderlies' hourly pay and is negotiating with unions in regards to longer-term salary hikes, but added such negotiations are "complicated."

Sylvie Nelson, the head of the union representing some 10,000 private care home workers, said advocates have been sounding the alarm about salaries and staffing levels for years.

She said many private sector employees generally make between $13 and $14 per hour to do challenging work — including feeding, changing adult diapers and administering medication — compared to $20 an hour or more in the public sector.

While raising salaries is a start, she said work conditions also need to improve, noting some workers are left in tears at the end of their shifts knowing they weren't able to provide the care the patients need.

"They get no information, often no material, no equipment," she said. "And since there's a shortage they're asked to do double what they normally would."

A police investigation was launched on the weekend into the deaths at Residence Herron in Dorval, Que., after health authorities learned that 31 people had died there since March 13. At least five of the deaths were due to COVID-19.

The home was placed under government trusteeship after regional health authorities who arrived on the site in late March found it severely understaffed, with residents lacking food and basic personal care.

Health authorities allege the home's management was unco-operative, forcing them to obtain an order to gain access to patient files.

But on Monday, Legault was asked about letters the home's owners reportedly sent to health authorities, claiming the home had informed them it was short-staffed and accusing the authorities of mishandling the case.

Legault noted that investigations by police, the coroner and the Health Department would eventually determine responsibility. He said he believed the residence had informed the health authority of a lack of personnel — but not of the dozens of deaths.

The premier said he doesn't think pervasive problems of low salaries and understaffing should have applied to the Herron residence. He said the home charges its residents between $3,000 and $10,000 a month, which should be more than enough to pay employees a good salary.

While she doesn't want to comment on a police investigation, Nelson suggests that the situation at the Herron residence could occur elsewhere.

"I don't think we've heard the worst of the crisis in the (long-term care) homes," she said.

But Nelson, whose union represents workers at the Herron residence, maintains that workers there did not simply abandon their posts as some reports have claimed.

Rather, she said most of the workers who were absent were either sick with COVID-19 themselves, or were in quarantine due to exposure.