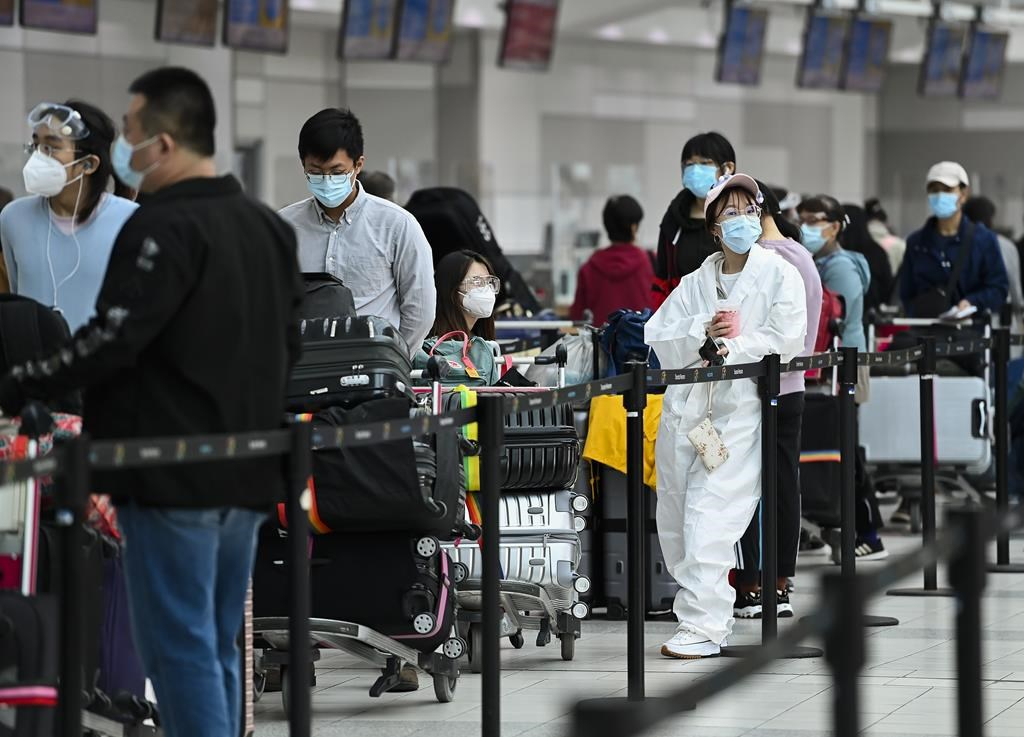 People line up and check in for an international flight at Pearson International Airport during the COVID-19 pandemic in Toronto on Wednesday, Oct. 14, 2020. File photo by The Canadian Press/Nathan Denette
Previous story
Next story

Canada's ban on flights from the United Kingdom is not being extended, replaced by a stringent COVID-19 testing program for air travellers.

Canada halted most air travel from the U.K., where a mutated strain of COVID-19 had been discovered, on Dec. 20.

Effective Thursday, passengers aged five and older must take a PCR test — the type of test common in Canada involving a deep nasal swab, and distinct from a rapid test.

The test has to be administered less than 72 hours before the scheduled departure, or 96 hours in the cases of 28 countries and territories, mainly in the Caribbean and South America, Garneau said at a virtual press conference. The four-day timeframe for those 28 jurisdictions shrinks to three days as of Jan. 14, however.

Airlines say they were not initially consulted on the testing scheme, which they will be responsible for enforcing at check-in counters around the globe.

“There is not just a legal obligation but a moral one ... Lives are at stake. We have already lost far too many people."

#Canada's ban on #flights from the United Kingdom is not being extended, replaced by a stringent #COVID19 testing program for air travellers. #UK #PCRtest

Airlines and passengers have raised concerns about testing capacity in some countries, with the fear that some travellers could wind up stranded overseas.

"We consider that it is perfectly reasonable within 72 hours to get the PCR test and to get results" — electronically or on paper — Garneau told reporters.

But Health Minister Patty Hajdu acknowledged that the requirement serves as a deterrent.

"This is exactly why we are advising people not to travel internationally," she said. "The reality is they may find it difficult even in countries that have the PCR testing capacity to acquire a test within the required timeframe."

Airlines are scrambling to draw up lists of overseas agencies and test centres for travellers to use, though Garneau said Transport Canada may publish a similar list down the line.

Conservative transport critic Stephanie Kusie called the plan "unacceptable" and suggested the Liberals remodel it based on a pilot project underway at Calgary's airport.

Canadians can take on-site COVID-19 tests after touching down there, and must then self-isolate for 24 to 48 hours while they wait for results. If they test negative, they can leave quarantine but must monitor themselves for symptoms and get second swabs within six to seven days of their arrival date.

"Now, in a hastily conceived plan announced six days ago, on New Year’s Eve, without any consultation or coordination with Canada’s airlines, the Liberal government has imposed a poorly thought out testing requirement with little information and few resources to execute," Kusie said in a statement.

In a separate announcement, Ontario said it will launch a pilot program to voluntarily test incoming passengers at Toronto’s Pearson airport.

Some uncertainty lingers around the federal rules.

It is unclear whether airlines whose flights are cancelled and rebooked days later — a common occurrence since March as demand collapsed — will accept tests administered within the timeframe of the initially scheduled departure but not within 72 hours of the rescheduled trip, said Air Transat spokesman Christophe Hennebelle.

Garneau's spokeswoman Allison St-Jean said carriers can fall back on the originally scheduled takeoff time in "unforeseen circumstances" such as bad weather or mechanical delays.

Other requirements have tightened since the basic plan was announced last Thursday.

It stated travellers from countries where testing was unavailable could return, but would have to spend their quarantine in a "federal facility." Now, only two places — Haiti and Saint Pierre and Miquelon, a French territory off the coast of Newfoundland — are exempt from the test mandate, and only until Jan. 21 and Jan. 14, respectively.

About 180 more federal public health officers have also been posted to points of entry across the country, he said.

Before departure, airlines will continue to take passengers' temperatures, ask questions including whether they've been exposed to anyone with COVID-19 and assess them for symptoms, Garneau said.

Returning travellers will have to submit a health questionnaire through the ArriveCAN app or web portal.