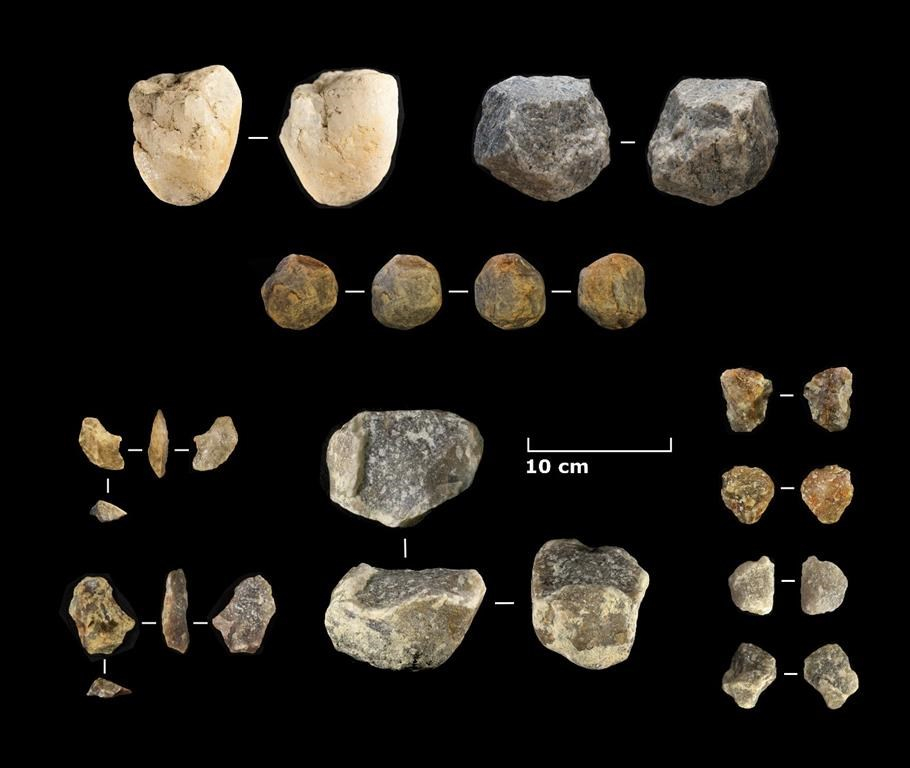 Stone tools found at Oldupai Gorge, an African site considered by many to be where humans first appeared are shown in this undated handout photo. Handout photo by Mohammad Javad Shoaee, Arturo Cueva Temprana
Previous story
Next story

To Julio Mercader of the University of Calgary, they look like two-million-year-old messages from the dawn of human technology.

"It is really the beginnings of technological dependence," said Mercader, lead author of a paper published Thursday in the journal Nature.

"The tools are from an early phase of that period that is marking a new relationship between humans and the environment."

The paper presents the combined work of 29 scientists from three continents. They analyzed a few dozen stone tools found at Oldupai Gorge, an African site considered by many to be where humans first appeared. Dating back two million years, the hand axes, quartz flakes and rock cores are among the oldest tools ever found.

They are so old they predate Homo sapiens. They may have been the work of Homo habilis ("handy man"), whose remains have been found nearby.

Any artifacts of that antiquity are precious. Mercader said what makes these especially valuable is that researchers from a wide variety of disciplines have been able to place them in an environmental context that shows just how adaptable humans have been since the start.

The tools span a time period of about 235,000 years. "It maybe sounds like a lot," said Mercader, "but in human evolution it is not a lot."

Over that time, the site's environment changed rapidly and often. It was a woodland, a lakeshore, a grassland, a meadow.

Those unimaginably ancient humans were at home in them all.

"No matter the change in the environment, the moment there is a disruption, a drastic change in the local ecology, humans move in right away," Mercader said.

"There was a huge volcanic eruption that really blanketed the landscape with a solid mass of molten rock. The moment that cools down and there are new plants and animals coming in, humans are doing the same.

"What it shows is the huge versatility and flexibility of behaviour that allows early humans to exploit whatever environment that happens to be in their proximity. This has deep roots."

The tools themselves are made from rocks that were found immediately adjacent or nearby. The makers seem to have carried around preferred stone cores they could use to knap a fresh flake when needed.

The tools didn't change much over time, said Mercader.

"The technology is kept flexible enough and general enough so that no matter what, you can still exploit the environment. It's like a Swiss Army knife."

The discoveries are the result of years of work in the area.

Researchers — trained to know the difference between a tool and a naturally chipped rock — first walk the landscape, looking for exposed bits of fossil bone. Lots of bone fossils suggest other artifacts may be nearby and a test dig ensues.

"If we like what we see, we open more space.

Mercader said the research is a textbook example of how scientists from different disciplines can collaborate to shed light on the far distant past.

"Working together with geoscientists and chemists and paleoecologists and paleogeographers, there is a lot we can infer from stone tools and the context in which they are found."

And there's nothing quite like holding in your hand a stone that some ancient toolmaker also held, Mercader said.

"That is the excitement that makes you want to become an archeologist."