By Cassandra Szklarski | News, Politics | January 8th 2021
#1105 of 1611 articles from the Special Report: Coronavirus in Canada 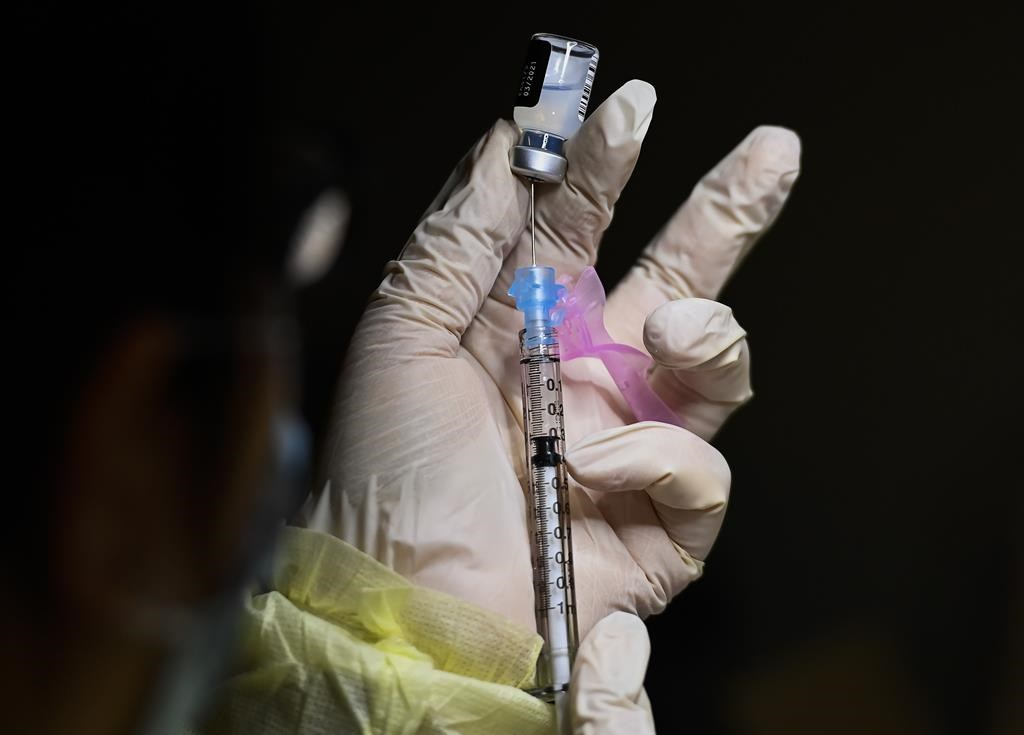 A registered pharmacist technician carefully fills the Pfizer-BioNTech COVID-19 mRNA vaccine at a vaccine clinic during the COVID-19 pandemic in Toronto on December 15, 2020. File photo by The Canadian Press/Nathan Denette
Previous story
Next story

Ontario's chief medical officer of health dashed expectations that southern Ontario kids could return to class this Monday by delaying in-person instruction another two weeks, citing reports of "concerning behaviour over the holidays."

Amid a new high of 3,519 cases and 89 deaths reported Thursday, Dr. David Williams also extended a regional shutdown in northern Ontario for another two weeks to align with a lockdown in the south, however northern elementary and secondary students can return to class Monday.

Williams said the positivity rate among tested children approached 20 per cent in early January for 12-13 year-olds, up sharply from 5.44 per cent in late November and early December. The government did not provide data on other age groups.

Restrictions on gatherings and business openings are set to expire Friday, however Premier Brian Pallister has already said they will be extended, with details yet to come.

British Columbia chose Feb. 5 to keep its restrictions in place with provincial health officer Dr. Bonnie Henry saying the number of infections was trending up again.

The public health rules prohibit social gatherings among people from different households, as well as adult team sports and other activities. They allow essential workplaces, schools and the health-care system to remain open.

Henry said it's important to protect the public, especially now that a vaccine is available.

"We are in this period of greatest risk and greatest potential benefit and we need to have the room to provide vaccine," she said.

In Alberta, Premier Jason Kenney said restrictions in place since mid-December banning private gatherings will remain until at least Jan. 21. Classrooms, however, will reopen as planned on Monday.

Alberta students in grades 7 to 12 have been learning from home since the end of November and kids in the younger grades switched to online classes after the Christmas break.

Kenney noted that between September and the Christmas break, only 0.4 per cent of students and staff tested positive for COVID-19 and case numbers have dropped among all school-aged groups in December.

"I know that some of you might feel anxious about putting your backpacks on and going back to class on Monday," Kenney said.

"But we have a practical plan that will always put the safety of students and school staff first."

The renewed clampdowns follow Quebec's announcement Wednesday that residents there will face an evening curfew Saturday that bars people from leaving their homes between 8 p.m. and 5 a.m., except to work.

Kindrachuk, on a one-year secondment to the University of Saskatchewan's Vaccine and Infectious Disease Organization-International Vaccine Centre, suspected the tough stance sends "alarm bells" to anyone still debating whether the second wave really is that bad and may embolden political and public health leaders in other regions to tighten their own measures.

"Maybe it causes people in the western provinces where they're not being that hard-hit right now to rethink what things they're not doing as far as infection prevention control," said Kindrachuk, pointing to widely varying school mask mandates as an example.

"At this point (there's) no sense of what is going to happen over the next two weeks that will make schools safer to return to when those two weeks are up," said Tuite, an assistant professor at the University of Toronto's Dalla Lana School of Public Health.

Quebec reported 2,519 new cases of COVID-19 on Thursday and 74 more deaths, including 16 that occurred in the past 24 hours.

Meanwhile, Gov. Gen. Julie Payette appealed to Canadians' sense of duty in a plea to adhere to public health measures including social distancing and minimizing movements.

In a video statement, Payette said vaccines offer hope but there aren't yet enough to go around.

As of Tuesday, Canada had received nearly 425,000 doses of the Moderna and Pfizer-BioNTech vaccines — but fewer than 150,000 Canadians had received shots by then.

During a conference call with premiers Thursday evening, an official said Prime Minister Justin Trudeau offered whatever support the federal government can provide to deploy vaccines as quickly as possible as deliveries ramp up over the next few weeks.