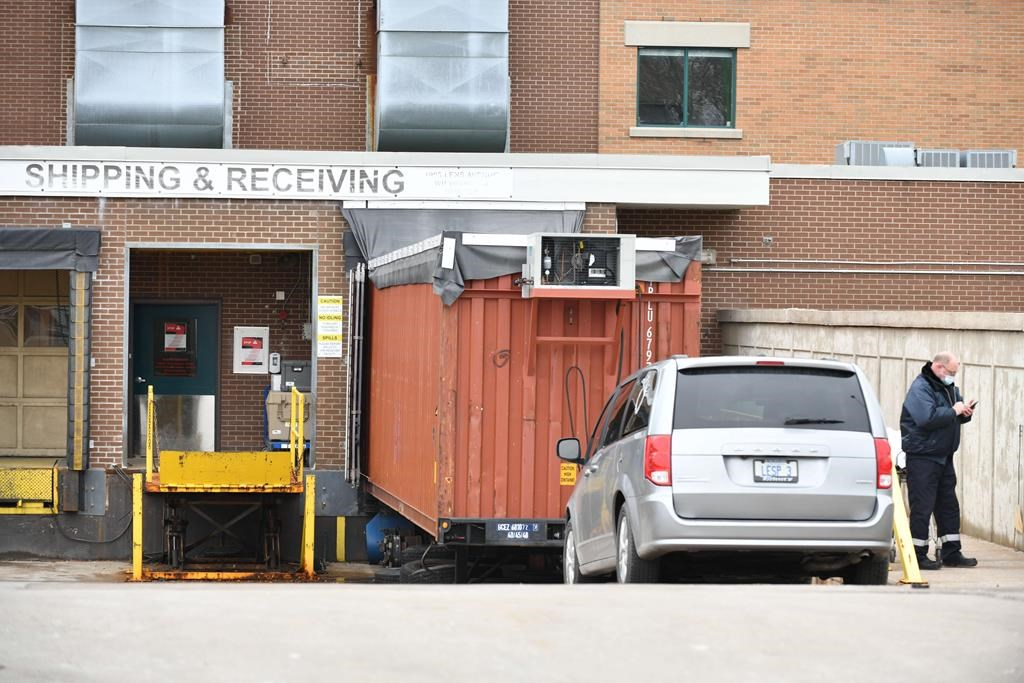 A grey minivan belonging to a local funeral home parks in front of a storage container that’s been converted into a temporary morgue at the rear of Windsor Regional Hospital Met Campus in Windsor, Ont., on Jan. 6, 2021. Photo by the Canadian Press
Previous story
Next story

Touting the need for drastic action, Quebec became the first province to impose a curfew Wednesday as soaring COVID-19 infections across Canada intensified the strain on hospitals and prompted some Ontario morgues to run out of space.

Quebec's premier pointed to the province's overburdened hospitals as he announced a four-week curfew, to begin Saturday, that would bar people from leaving their homes between 8 p.m. and 5 a.m., unless they are going to work.

Francois Legault said he wants the measure -- part of a broader series of restrictions presented Wednesday -- to serve as an "electroshock" for Quebecers regarding the province's dire situation.

Officials have been struggling to understand why Quebec's caseload has continued to spike despite existing restrictions, and concluded they needed to crack down on gatherings in residences.

The bulk of Canada's COVID-19 cases remain in Quebec and neighbouring Ontario, both of which have seen conditions deteriorating rapidly in recent weeks.

Compounding the picture was the still small but growing number of cases related to a novel coronavirus variant first found in the U.K. that is believed to be even more contagious than the original.

In her daily update, Dr. Theresa Tam, the country's chief public health officer, said Wednesday that the appearance of new variants is more reason to scrap all but absolutely necessary travel.

In the interim, the grim pandemic toll continued unbridled.

Quebec reported another 47 deaths from COVID-19, with 2,641 new cases and a rise in both hospitalizations and people in intensive care. It has recorded 217,999 COVID-19 infections and 8,488 related deaths since the beginning of the pandemic.

The curfew announced Wednesday comes with possible penalties for those found breaching the rules, including a fine of up to $6,000. The province acknowledged it can't point to a scientific study on the effectiveness of curfews in limiting the spread of the virus, but said its goal is to reduce the possibility of contact and contagion.

All non-essential businesses that were ordered closed last month will remain shuttered until Feb. 8, the date the curfew is expected to lift. Elementary schools, however, will reopen as scheduled on Monday, with high schools to follow the week after.

Ontario, meanwhile, reported another 37 deaths amid 3,266 new cases of the novel coronavirus as hospitals, particularly in southern Ontario, warned the intensive care situation had become dire.

A hospital in London, Ont., was starting to store bodies in a mobile unit after its morgue reached capacity. A hospital in nearby Windsor said it had been storing bodies in a trailer unit for the last two weeks.

David Musyj, CEO of Windsor Regional Hospital, said funeral homes were being strained by a "substantial" number of deaths in the area due in large part to COVID-19.

In a bleak assessment of the coming month, the head of the Ontario Hospitals Association warned the acute-care system is already more stretched than ever and the situation more dire.

"Unfortunately, all the indicators still are heading in the wrong direction," said Anthony Dale. "In some cases, they're accelerating, so the situation is actually getting much worse."

The Chatham-Kent Health Alliance, for example, said its intensive care unit was already at 100 per cent capacity.

To cope with the onslaught, some Ontario hospitals have begun using field units or cancelling non-urgent surgeries.

The problem for hospitals is that it will likely take another week or two to gauge the impact of current anti-pandemic measures and, more significantly, the impact of people's choices over the holidays.

New Brunswick's chief medical officer of health, Dr. Jennifer Russell, said she expected a jump in cases as a result of New Year’s Eve gatherings. Her comments came as the province reported 31 new cases — its highest single-day increase since the start of the pandemic.

In Manitoba, Premier Brian Pallister said current restrictions on businesses and public gatherings would be extended beyond this week as the province reported 167 new cases and 10 more deaths.

In Ottawa, Garneau also clarified testing requirements for passengers arriving in Canada, saying the rules that require passengers to show proof of negative COVID-19 test results will help curb the spread of the virus across borders.

Passengers must take the PCR test — distinct from a rapid test — less than 72 hours before takeoff, or 96 hours in the cases of two dozen countries, mainly in the Caribbean.