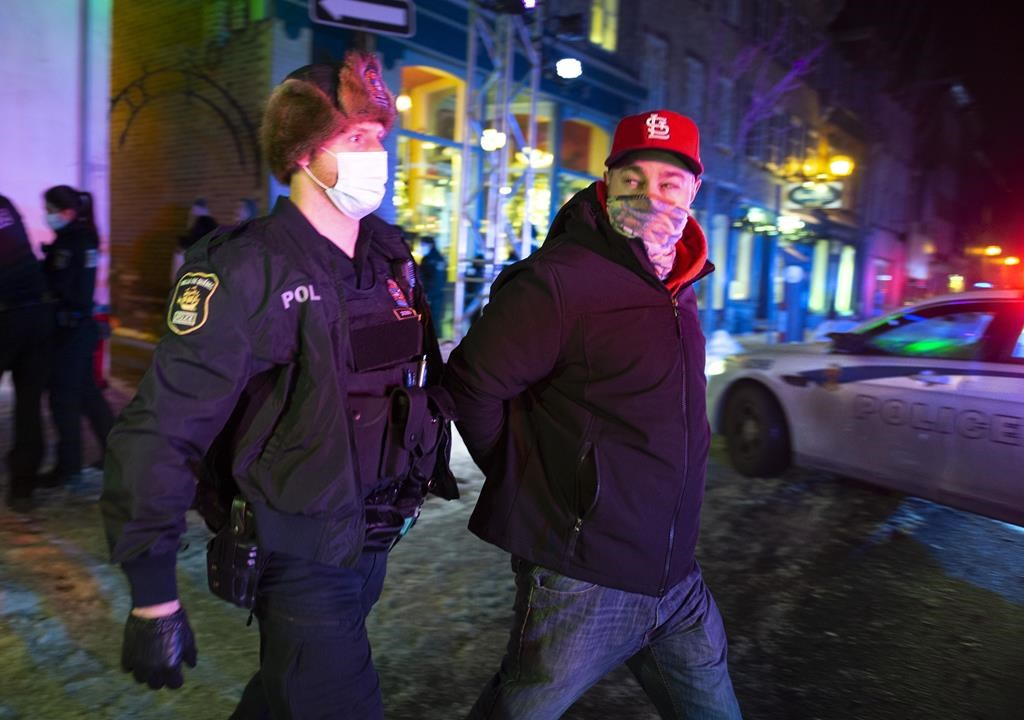 A man is arrested by police after 8 p.m. as a curfew begins in the province of Quebec to counter the spread of COVID-19, on Saturday, Jan. 9, 2021 in Quebec City. File photo by The Canadian Press/Jacques Boissinot
Previous story
Next story

Quebec's second opposition party is calling for people experiencing homelessness to be exempt from the government-imposed curfew.

Alexandre Leduc, a member of Quebec solidaire, said Wednesday his party is concerned after hearing reports that homeless people have been ticketed in Val-d'Or and Montreal for violating the health order.

With the majority of Quebecers following the curfew — which requires people stay home between 8 p.m. and 5 a.m. — Leduc said there should be more flexibility for people on the street, who he said are already disadvantaged.

He's said he's worried about people with addictions because most shelters don't allow people to use drugs or alcohol. People who are homeless should not be subject to the curfew, he said.

Shelters are running out of space, Bacro said, adding that some people are avoiding them because they're worried about getting COVID-19. Other homeless people, she said, have been banned from shelters.

"We can't force people to go stay in a shelter," Bacro said. "We're talking about people, not objects that we can move from one place to another." Fining homeless people, she said, won't help anyone.

Montreal police spokeswoman Const. Annabelle Prato said police officers have been asked to use their judgment when dealing with homeless people who are outdoors after 8 p.m. In an email Wednesday, she said police are looking at the context of each situation and, when possible, helping homeless people access available resources.

Premier Francois Legault imposed a curfew until at least Feb. 8 as a way to limit people's contacts and reduce COVID-19 transmission. Health officials say hospitals, especially in the Montreal area, are overwhelmed with COVID patients and risk having to ration care.

Essential workers who have to be outside between 8 p.m. and 5 a.m. are required to carry a letter from their employer explaining their status.

Sarah Vresk, who works in snow removal, said she was on her way to work shortly before 4 a.m. on Jan. 12, when police stopped her. She said she gave the officer her employer's letter. Then, she said, he asked to look inside her lunch bag, which she said was sitting on the passenger seat.

When she refused, she said the officer told her the letter was "just a piece of paper" and threatened to give her a ticket for violating the curfew.

"It really felt like he didn't believe me because I didn't want to open my bag," she said in an interview. "It felt very much inferred that if I didn't open the bag, then he would have more questions about the letter, or then the letter would not be valid."

She said the police let her go without a ticket shortly after she showed them the contents of the bag.

Michael Bryant, executive director of the Canadian Civil Liberties Association, said his group has been concerned Quebec police would abuse their power during the curfew.

"This is exactly what we were worried about — that police were going to abuse this power and use it to wrongly search and seize people's property," he said in an interview Wednesday. Bryant said his organization is also worried about how the homeless would fare under the new rules.

"They should only be ticketing as a last resort," he said of people experiencing homelessness, "and they're not, they're ticketing as a first resort. It's an abuse of their power."

"We're talking about only a few cases out of the hundreds of interventions this weekend," she said in an email. "No one wants to over-police our citizens in situations of homelessness."

People outside during the curfew must show proper documents to police and answer their questions, she said, adding that if police don't judge those answers credible, they can issue a ticket. Anyone who believes they have been unfairly ticketed can challenge the fine in court, she added.

Alexandra Pierre, president of a Quebec civil liberties advocacy group called the Ligue des droits et libertes, said when she heard Guilbault during a news conference ask police to use their "judgment" and "discernment" when enforcing the curfew, it worried her.

"For us, all those words mean arbitrariness," she said in an interview Wednesday. "Since the beginning of the pandemic, social profiling, racial profiling hasn't disappeared."