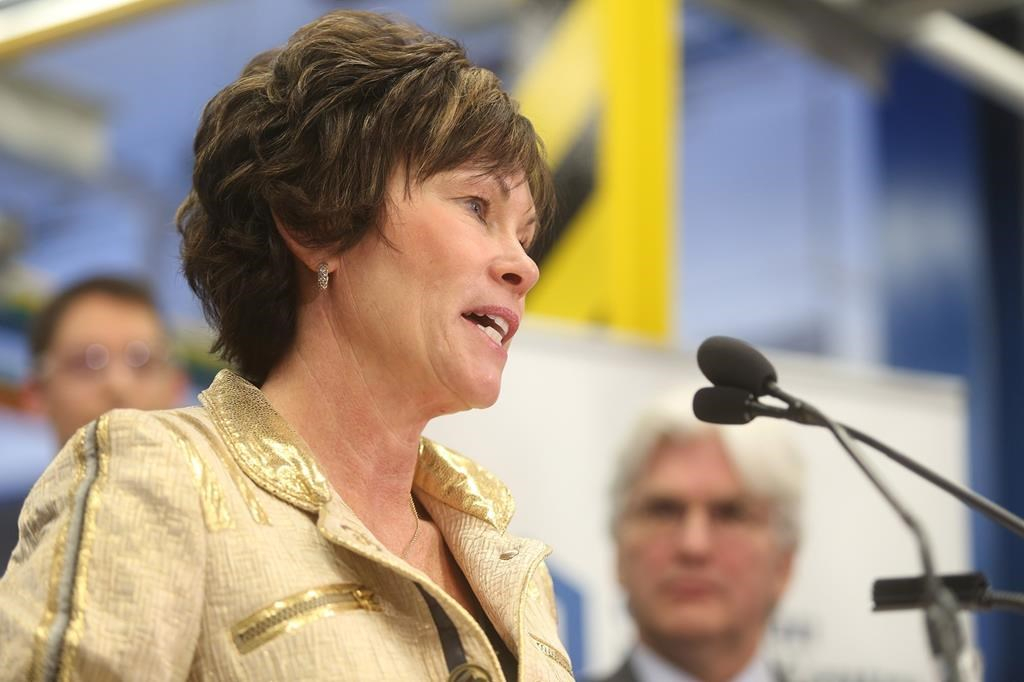 Alberta Energy Minister Sonya Savage addresses the attendees while Tom Olsen, Managing Director of the Canadian Energy Centre, looks on at a press conference at SAIT in Calgary on Wednesday, Dec. 11, 2019. File photo by The Canadian Press/Greg Fulmes
Previous story
Next story

First Nations, ranchers, municipal officials and environmentalists hope to persuade a judge this week to force Alberta to revisit its decision to open one of the province's most important and best-loved landscapes to open-pit coal mining.

At least nine interveners will seek to join a southern Alberta rancher's request for a judicial review of the province's decision to rescind a coal-mining policy that had protected the eastern slopes of the Rocky Mountains — and the headwaters that flow from them — for almost 45 years.

"You talk about the Alberta identity," said Ian Urquhart of the Alberta Wilderness Association, one of the parties looking for standing.

"The eastern slopes, the Rocky Mountains and the foothills, are at the heart of what the Alberta identity is. This policy change threatens that."

The eastern slopes are the source of three major rivers — the Red Deer, the Oldman and the South Saskatchewan. Everyone in southern Alberta and many in Saskatchewan depend on those rivers for drinking water, irrigation and industry. The water is heavily allocated.

Endangered species, including cutthroat trout and grizzly bears, live there. The region's beauty is universally acknowledged.

A 1976 policy brought in by Peter Lougheed's government laid out how and where coal development could go ahead, forbade open-pit mines over a large area and banned any mining at all in the most sensitive spots. It came after years of work and dozens of public consultations, said David Luff, a retired civil servant and consultant who worked on the policy.

"Albertans overwhelmingly said the eastern slopes should be devoted to watershed protection, recreation and tourism. Lougheed had a very compelling vision based on input he received from extensive public consultation."

Over the years, the policy informed the Alberta Land Stewardship Act and was written into legally binding land-use plans.

Last spring, the policy was quietly revoked by Energy Minister Sonya Savage with no consultation. It was done on the Friday of the May long weekend, during the height of COVID-19's first wave, through an information letter on the department's website.

First Nations, ranchers, municipal officials and environmentalists hope to persuade a judge this week to force #Alberta to revisit its decision to open one of the province's most important and best-loved landscapes to open-pit #coal mining. #abpoli

But legally wrong? The province doesn't think so.

The hearing in Calgary Court of Queen's Bench is to begin Tuesday with Alberta arguing that there was no duty to consult because the coal policy was just that — a policy.

"The 1976 coal policy was not enacted using a legislative tool, so it can be rescinded unilaterally by Alberta Energy at any time," says a provincial briefing note entered in the court record.

The province plans to ask the court to rule that the change is a political decision, not a legal matter, and the review request should be dismissed.

Nigel Bankes, chair of natural resources law at the University of Calgary, notes land-use plans and the land stewardship act both promise consultation before major change.

"This is effectively an amendment to the plan and therefore triggers the consultation obligations," he said.

"There's certainly case law to suggest that high-level policy changes may trigger the duty to consult."

As well, Bankes said, First Nations are owed a duty to consult. Three of them — the Bearspaw, Ermineskin and Whitefish — are asking to intervene.

He suggests there's a good chance the court will turn down the provincial request for dismissal.

Other hopeful interveners include the Municipal District of Ranchland, which is concerned about the impact that coal development could have on municipal services and infrastructure.

One coal company — Cabin Ridge Coal — has asked for standing as well. It says it's already invested substantial money in exploration leases.

"Restoration of the coal policy will create uncertainty in circumstances where the (Alberta Energy Regulator) presently has clear standards and processes for considering proposed exploration and development activities in Alberta," it says in a court filing.

Alberta officials have said mining will create hundreds of jobs and generate millions of tax dollars at a time when the province really needs them. They say any proposed mines would still be reviewed by the provincial regulator.

A petition to the federal government opposing one development already in the review stage had more than 25,000 signatures as of Friday morning.

The government has sold leases on about 1.4 million hectares of land for coal exploration since the policy was revoked. At least one provincial recreation area is partly covered by a coal lease and four others are surrounded by them.

This report by The Canadian Press was first published Jan. 17, 2021.