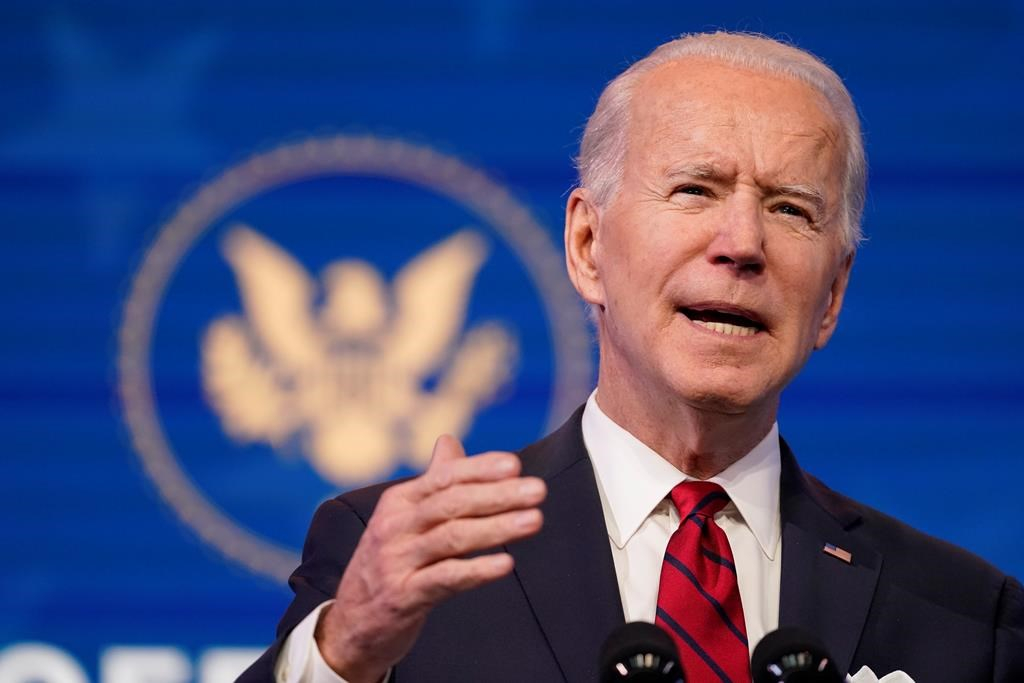 President-elect Joe Biden speaks during an event at The Queen theatre, on Friday, Jan. 15, 2021, in Wilmington, Del. File photo by The Associated Press/Matt Slocum
Previous story
Next story

One of Joe Biden's first actions once he becomes U.S. president Wednesday will be to slam the door yet again on Canada's politically fraught Keystone XL pipeline expansion, transition documents suggest.

The documents, seen by The Canadian Press, feature a to-do list for inauguration day that includes signing an executive order to rescind the Keystone XL construction permit granted in 2019 by predecessor Donald Trump.

They also suggest that despite its best efforts, Canada has failed to convince the incoming administration of the virtues of importing fossil-fuel energy from a friendly ally and trading partner with similar climate change goals.

Other entries under the "Climate" heading include, "Rejoin the Paris Agreement" and "Announce date for U.S.-hosted Leaders' Climate Summit."

Campaign officials promised in May that if elected, Biden would cancel the $8-billion US cross-border project, but neither the timeline nor the extent of Biden's own commitment to the promise was clear until now.

The controversial, on-again, off-again pipeline expansion, owned by Calgary-based TC Energy, would ferry up to 830,000 additional barrels a day of diluted bitumen from Alberta's oilsands to refineries along the U.S. Gulf Coast.

Government officials quietly refused to rule out the possibility that there might still be time to change the Biden administration's mind.

Kirsten Hillman, Canada's ambassador to the U.S., has argued for months that the project is not the same one President Barack Obama rejected in 2015 — an argument she reiterated in a statement Sunday.

"Per-barrel oilsands (greenhouse gas) emissions have dropped 31 per cent since 2000, and innovation will continue to drive progress."

The federal Liberal government has also beefed up its climate plan in an effort to exceed the current target for cutting greenhouse gases by 2030, and to reach net-zero emissions by 2050, she added.

Ever since May, Canadian officials have been advocating for a cross-border discussion on climate and energy that would make room for both building the project and reducing emissions at the same time.

"Keystone XL fits within Canada’s climate plan," Hillman said, adding that it promises good union jobs in both countries "at a time when our economic recovery is a top priority."

"Underpinned by a crucial and long-standing trade and security partnership, there is no better partner for the U.S. on climate action than Canada as we work together for green transition."

Where Ottawa was clinging to hope, however, Alberta appeared to be girding for a fight.

"We renew our call on the incoming administration to show respect for Canada as the United States' most important trading partner and strategic ally," Premier Jason Kenney said in a statement.

Cancelling the project would "kill jobs" in both countries, "weaken" cross-border ties and "undermine U.S. national security" by making the country more dependent than ever on oil imports from OPEC countries, he said.

"Should the incoming U.S. administration abrogate the Keystone XL permit, Alberta will work with TC Energy to use all legal avenues available to protect its interest in the project."

TC Energy, however, confirmed an ambitious plan to spend $1.7 billion US on a solar, wind and battery-powered operating system for the pipeline to ensure it is zero-emission by 2030, and to rely exclusively on union labour — all of it clearly aimed at winning Biden's favour.

"Since it was initially proposed more than 10 years ago, the Keystone XL project has evolved with the needs of North America, our communities and the environment," project president Richard Prior said in a release.

"We are confident that Keystone XL is not only the safest and most reliable method to transport oil to markets, but the initiatives announced today also ensure it will have the lowest environmental impact of an oil pipeline in terms of greenhouse gas emissions."

"I call on the prime minister to immediately reach out to the incoming U.S. administration to stop this from happening and stand up for working Canadians across Canada," O'Toole said.

"I also call upon the incoming U.S. administration to meet with our prime minister and affected workers prior to making this decision."

Some 200 kilometres of pipe have already been installed for the expansion, including across the Canada-U. S. border, and construction has begun on pump stations in Alberta and several U.S. states.

Biden was vice-president in 2015 when Obama initially rejected Keystone XL for fear it would worsen climate change. Trump approved it again in 2019.

The Biden campaign team appeared to slam the door on the expansion in May with an unequivocal statement committing the president-elect to "proudly" sign an order that would "stop it for good."

But observers and experts alike continued to hold out hope, even after Biden named John Kerry — the climate hawk who as secretary of state recommended that Obama reject the permit — as a special presidential envoy on climate change.

"The Keystone pipeline is & always has been a disaster," he said on Twitter. "With all of the major crises facing America, we must never lose sight of the most existential threat facing our planet: climate change."

"The Biden administration offers us a fresh start on addressing the climate crisis with a willing partner, so let’s not blow it by pushing pipelines."

This report from The Canadian Press was first published Jan. 17, 2021.

"Keystone XL fits within Canada’s climate plan"
Canada's climate plan is to miss its inadequate targets by miles.
Oilsands expansion enabled by new export pipelines will make sure of that.
*
Canada can either expand the oilsands or meet its climate targets. Not both.
Trudeau is talking out of both sides of his mouth.
This is the same Liberal Govt that declared a climate emergency one day and approved the TMX pipeline expansion the next.
Shame on Canada!
*
Nominal oilsands total emissions (grossly under-reported) have more than tripled since 2000, as nearly five-fold production growth has outpaced technological improvements. Oilsands expansion enabled by new export pipelines will prevent Canada from meeting its inadequate emissions targets for decades.
*
The oil industry, Ottawa, Canada's Big Banks, and the AB Govt are banking on climate disaster.
Kenney recklessly bet $1.5 billion on the Keystone XL pipeline — and on the the U.S. election.
Trump lost. Kenney lost. Taxpayers lost.
*
Congrats to Pres. Biden's team for not falling for Canada's oilsands fictions.

The UN, the Organization for

"TC Energy, however, confirmed an ambitious plan to spend $1.7 billion US on a solar, wind and battery-powered operating system for the pipeline to ensure it is zero-emission by 2030."

Obvious diversion. TC Energy ignores upstream emissions at the production end. Most of the emissions occur during combustion at the consumer end. The pipeline's emissions are not the issue.

About the only thing that

About the only thing that would cause American Greens that Biden is trying to appease would be some kind of huge concession.

My SF dream would be some "Grand Bargain" thingy where the O&G guys get the couple of projects they're torqued about just now (Keystone XL and another pipeline? Two? Whatever...), on the understanding that these are the LAST major oil & gas infrastructures even proposed. They can keep drilling on land they own, and keep shipping it with the pipelines and plants they've got, but no more. Sunset industry. They get the approvals in return for a plan to navigate their own shutdown, a timetable, even a PR campaign to announce it.

To Greens reading, that may sound like complete capitulation (to the issues of today) in return for a few words, but a major "mindshare" problem that we have is there's still be no official admission, by government, industry, or indeed anybody outside a narrow "activist community", that O&G are in fact a sunset industry, with a future entirely of decline.

I've come to see more and more, watching the news for decades, how important this "mindshare" is; Reagan with his "government is the problem", with "terrorism" as an excuse for anything, our own Kalle Lasn inventing "The 1%" concept in 2009. Society is ready to see O&G as So Over, but we just aren't there yet.