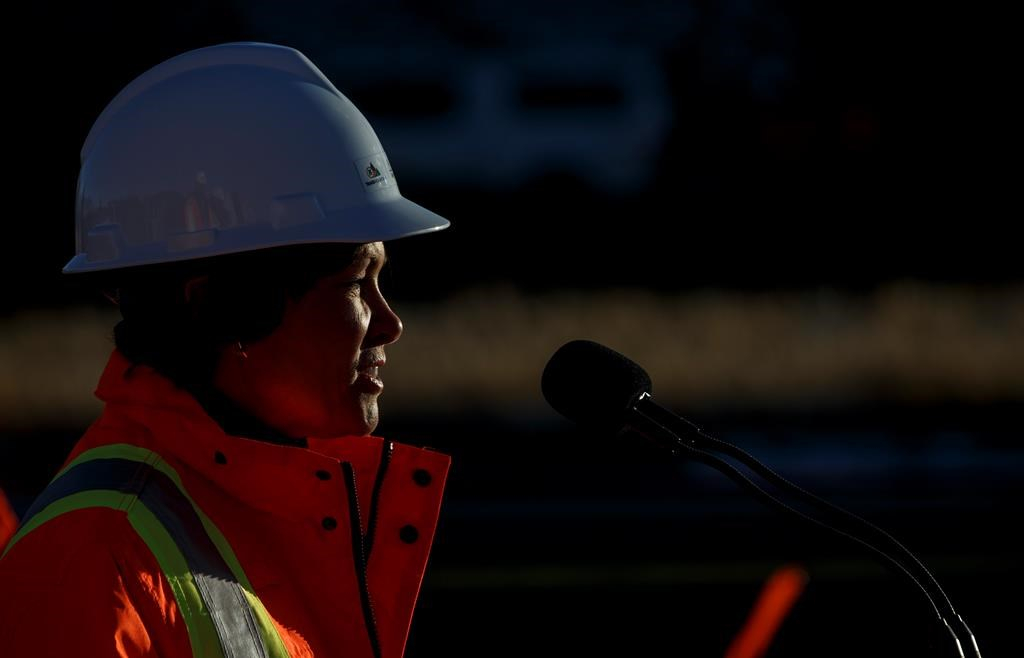 Sonya Savage, Minister of Energy, Government of Alberta speaks during an event to mark the start of right-of-way construction for the Trans Mountain Expansion Project, in Acheson, Alta., on Tuesday, Dec. 3, 2019. File photo by The Canadian Press/Jason Fra
Previous story
Next story

Alberta has decided to cancel recently issued coal leases in the Rocky Mountains, as public opposition grows to the United Conservative government's plan to expand coal mining in the area.

Late Monday afternoon, Energy Minister Sonya Savage issued a press release saying the sale of 11 recently purchased coal leases would be cancelled. Savage added that no further leases would be sold on lands that were protected from open-pit mines under a policy the government revoked last May.

"We have listened carefully to the concerns raised in recent days, and thank those who spoke up with passion," she said in the release.

“This pause will provide our government with the opportunity to ensure that the interests of Albertans, as owners of mineral resources, are protected."

She also said the move will have no impact on existing coal projects currently under regulatory review.

The cancelled leases are a small portion of the coal exploration leases the government has issued since revoking a policy that protected the eastern slopes of the Rockies — home to endangered species as well as the water source for millions downstream — since 1976.

The decision came as more than 100,000 signatures had been collected on two petitions opposing increased mining on two related fronts.

One, sponsored by environmental groups on Change.org, was addressed to the provincial government and had 77,000 signatures Monday afternoon — an increase of about 10,000 over the weekend.

Another, sponsored by a private citizen and addressed to federal Environment Minister Jonathan Wilkinson, had nearly 28,000 names opposing the Benga coal project in southern Alberta, which is undergoing a federal-provincial environmental review.

As well, a Facebook site called Protect Alberta's Rockies and Headwaters has more than doubled its membership over the last week to more than 10,000. The Benga review has received more than 4,000 statements of concern from members of the public, the vast majority opposing the project.

Members of the Blood Tribe in southern Alberta have sent more than 700 postcards to Wilkinson asking him to block coal development in the Rockies and another 2,000 have joined an online group to that end, said organizer Latasha Calf Robe.

The Opposition New Democrats also started a petition that garnered nearly 2,900 names in a week. A spokesman said the number nearly doubles every day.

"They're not committing to reinstating the coal policy, so they're not ruling out future development in these areas like people are demanding. It's a partial victory, but it's a clear signal that Albertans need to keep pushing to put permanent protections in."

Schmidt asked if the cancellations create any financial obligations for the province.

"How much are taxpayers on the hook for?"

Neither Savage nor Alberta Energy staff were available to take questions on the issue.

"The government is obviously feeling the pressure," said Katie Morrison of the Canadian Parks and Wilderness Society.

She pointed out Monday's announcement doesn't affect coal leases covering 420,000 hectares the government has sold since cancelling the coal policy.

"What can still go forward is massive," she said.

Before the cancellations, at least eight provincial recreation areas would have been mostly or completely surrounded by coal exploration leases. It wasn't immediately clear how they are affected by the move.

Provincial New Democrat Opposition leader Rachel Notley said public outcry over development in one of Alberta's best-loved landscapes was rooted in the government's plan to change how provincial parks are classified and protected. She said that decision -- also announced without consultation -- damaged trust in the United Conservatives.

"One thing that did percolate over the summer was the overall distrust of this government's plans," she said. "(The coal protests) feed off that same level of distrust.

"Folks are very, very suspicious of these guys."

"Historic party lines are realigning as we speak. You go to very wealthy areas of the province that definitely align themselves with conservatives and you see Save My Parks signs all over the place."

This report by The Canadian Press was first published Jan. 18, 2021