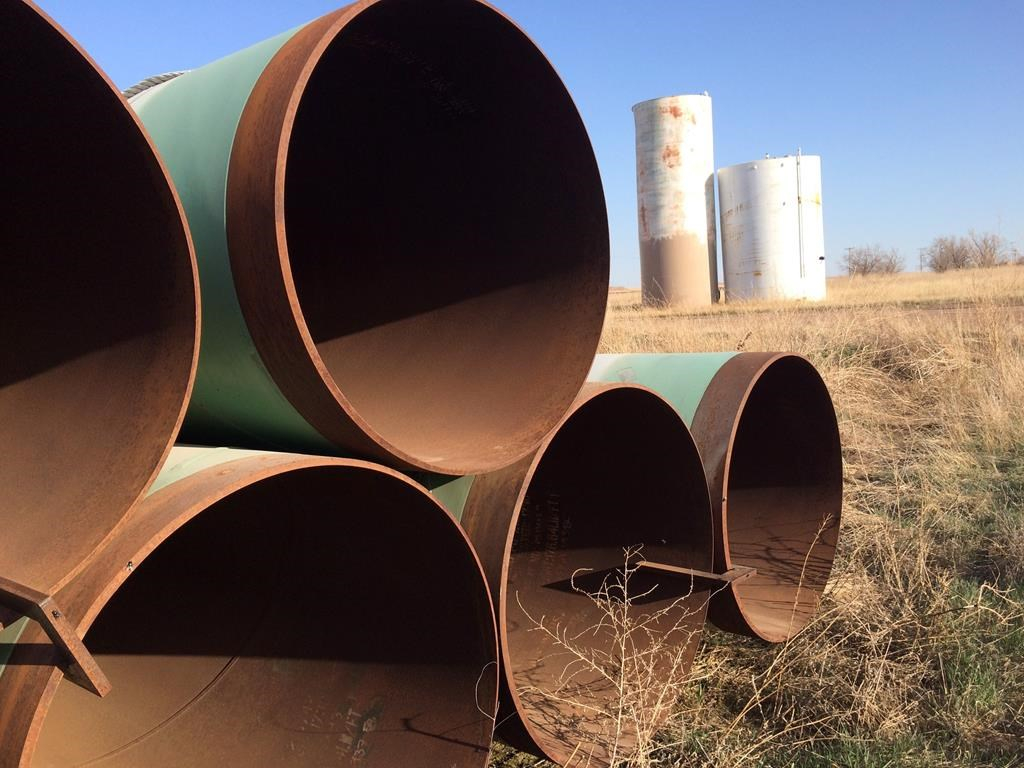 A yard in Gascoyne, ND., which has hundreds of kilometres of pipes stacked inside it that are supposed to go into the Keystone XL pipeline, should it ever be approved are shown on April 22, 2015. File photo by The Canadian Press/Alex Panetta
Previous story
Next story

Sustainable investing experts say TC Energy Corp.'s plan to decarbonize the Keystone XL pipeline is unlikely to save its fortunes, as a growing movement to divest from fossil fuels gains political clout.

U.S. President-elect Joe Biden intends to sign an executive order on inauguration day to rescind the presidential permit for the Keystone XL pipeline issued by his predecessor Donald Trump, according to transition documents.

The company in turn announced that its plan for the Keystone XL project would achieve net zero emissions when it is placed into service.

Biden’s move to rescind the permit for the project, which has faced controversy over its effects on landowners, Indigenous groups and the environment, may not be a surprise for investors who followed the project during Barack Obama’s administration, said Olaf Weber, research chair in sustainable finance at the University of Waterloo.

But, Weber said Biden has sent a strong signal — that more projects could be cancelled — to the group of investors that were already questioning the future of Canada’s oilsands. Weber said coal and oilsands are considered particularly risky under increasingly popular standards of environmental, social, and corporate governance investing.

"Generally ESG considerations do not automatically exclude certain industries," said Weber. "But there is definitely a high risk for the oilsands, in particular, that they will have less investment in the future."

Weber said it could be possible for Canadian companies like TC Energy to fit into the ESG framework for some institutional investors. Royal Dutch Shell, for example, has told investors it won’t add greenhouse gases to the atmosphere starting in 2050.

But Weber said that globally, financial investment is moving away from fossil fuels, particularly those that are most carbon intensive, in countries that have signed onto the Paris Agreement. He pointed to Kommunal Landspensjonskasse or KLP, Norway’s largest pension fund, which in 2019 cut four Canadian energy names from its investment list, aiming to divest from companies that derive more than five per cent of their revenue from the oilsands. Other international financial firms, like BlackRock, have made broader calls on corporations to consider climate-change risks.

While the energy sector represented 23 per cent of foreign direct investment in Canada as of 2018, that was down one per cent from the prior year, according to Natural Resources Canada.

"From an international perspective, we have already seen investors go out of the oilsands, " Weber said. "Canadian investors, they hesitate doing that, because it's a very strong industry in the country."

Sustainable investing experts say #TCEnergy Corp.'s plan to decarbonize the #KeystoneXL pipeline is unlikely to save its fortunes, as a growing movement to divest from fossil fuels gains political clout.#KXL #ESG

In the past few years though, some sentiment has shifted. In June, 15 Canadian universities said they would regularly begin measuring the “carbon intensity” of their portfolios and would reduce it over time. In November, eight Canadian institutional investors, including the Canada Pension Plan Investment Board, Caisse de Depot et Placement du Quebec and Alberta Investment Management Corp., called on corporations to standardize their ESG disclosures. Former Bank of Canada and Bank of England governor Mark Carney now works on ESG issues for Brookfield Asset Management.

Leanne Keddie, an assistant professor at Carleton University who studies sustainability accounting, said that these types of institutional investors have plenty of sway on companies' actions. Whether TC Energy's plan will impress ESG-focused banks and investors is the "magic question," she said.

"I would think it would be difficult for them — not impossible, but difficult — to try to convince investors that this is a good financial risk," Keddie said.

While TC Energy's carbon-neutral pledge for Keystone might reassure investors, it also might be coming too late, said Ryan Riordan, director of research at the Institute for Sustainable Finance at Queen's Smith School of Business. Riordan noted that the average investor has already become much more interested in ESG.

"There are investors that were perhaps, up until now, on the fence, who now throw their hands up and say... 'It's not going back to the old, Exxon, Shell, BP world. It's a new world, and so I'm going to get out of these types of investments,'" said Riordan. "But there are probably very few non-ESG-sensitive investors left."

Riordan added that even those who aren't interested in the ESG framework may be skeptical of TC Energy's path forward.

"Decarbonizing projects isn’t free ... so while the reputational or environmental risk around carbon might be dealt with, it's really just making a project more expensive," said Riordan.

"Investors generally don't like risk, and this is just adding another layer of risk to to a project."

— With a file from Brett Bundale, Dan Healing and James McCarten

Obvious diversion. TC Energy ignores upstream emissions at the production end. Most emissions occur during combustion at the consumer end. The pipeline's emissions are not the issue. It's what's at either end that counts.