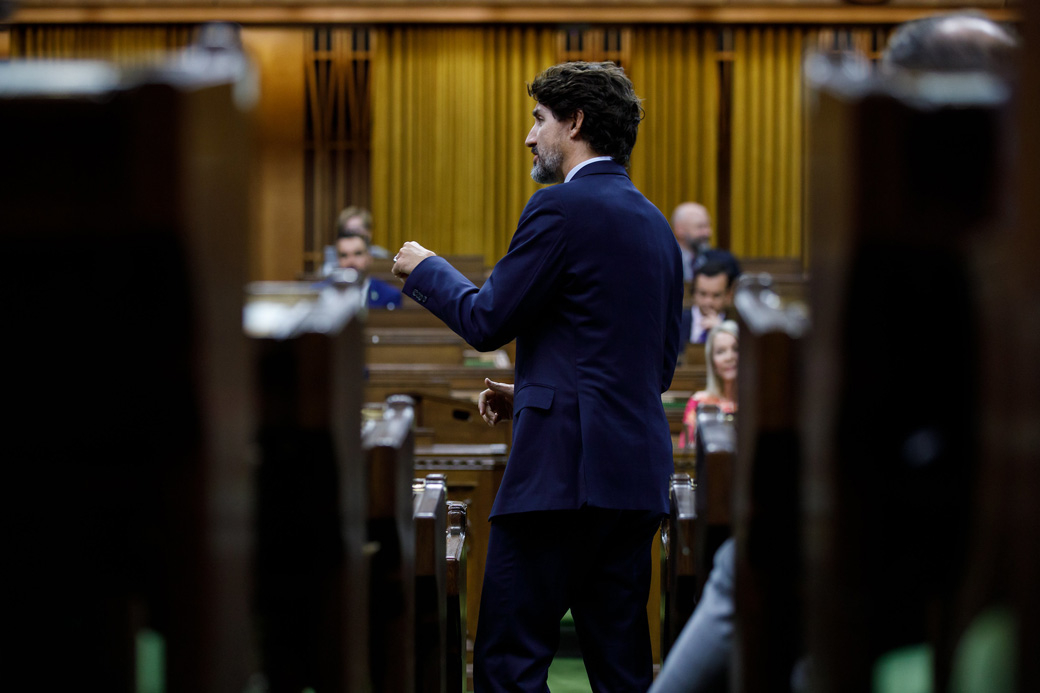 Prime Minister Justin Trudeau, seen here during question period on Sept. 29, has said he doesn’t see the effectiveness in joining the treaty since Canada doesn’t have nuclear weapons. Photo by Adam Scotti/PMO
Previous story
Next story

The Treaty on the Prohibition of Nuclear Weapons (TPNW), which outlaws the possession, use or threat of use of nuclear weapons, will become legally binding on Friday for the 51 countries that ratified it. In total, 122 states in the UN General Assembly have endorsed the treaty, of which 86 are signatories — but not Canada.

Members from all major political parties were invited Thursday to discuss the matter. No Conservative MPs were able to make it, according to NDP MP Heather McPherson, who chaired the press conference.

“The world is unquestionably safer without nuclear weapons and Canada should sign on to the treaty,” said Liberal MP Nathaniel Erskine-Smith. “We know we aren’t going to see the end of the possession of nuclear weapons in the short term, but it is incredibly important that the world stigmatizes and delegitimizes the use of these weapons and the possession of these weapons going forward.”

There has been a growing call for Canada to sign the nuclear ban pact. Seven former Canadian prime ministers and foreign and defence ministers, including Lloyd Axworthy and Jean Chrétien, signed an open letter in September 2020 calling on the government to “show courage and boldness” by joining the treaty.

The Canadian government has maintained it can’t since it’s a member of NATO, which has a nuclear weapons first-strike policy and sees these weapons as “a core component of NATO’s overall capabilities for deterrence and defence.”

In 2016, Canada voted against a UN General Assembly resolution that got the ball rolling on the initial talks of the treaty. Ahead of the vote, the United States called on NATO members “not to merely abstain” from the resolution, but to vote against it. Canada then didn’t participate in the negotiation of the treaty the following year.

The prime minister has also said he doesn’t see the effectiveness in Canada joining the treaty since it doesn’t actually have nuclear weapons of its own.

“There can be all sorts of people talking about nuclear disarmament, but if they do not actually have nuclear arms, it is sort of useless to have them around, talking,” Trudeau said during question period in 2017.

However, MPs at the press conference disagree and support discussing the signing of the treaty in the House of Commons and in parliamentary committees.

“We are a country that represents a bridge between divides; a country that can play an important role between those countries that do have nuclear weapons and the rest of the world that lives in fear of them,” May said.

She added that Canada played a similar role by leading the Ottawa Treaty in the 1990s which banned the use of anti-personnel landmines, even though Canada didn’t manufacture landmines of its own.

Bloc Québécois MP Alexis Brunelle-Duceppe believes Canada’s involvement in the treaty could even have an influence on the United States. President Joe Biden quickly overturning many of Donald Trump’s acts is a good indication to Brunelle-Duceppe that the U.S. could lean more towards nuclear disarmament.

“He will listen and that’s where we can do something to bring (the U.S.) to this conversation,” Brunelle-Duceppe said. “But for that, we have to start a conversation with them, and we have to lead this thing.”

UN disarmament chief warns of 'dark side' of AI