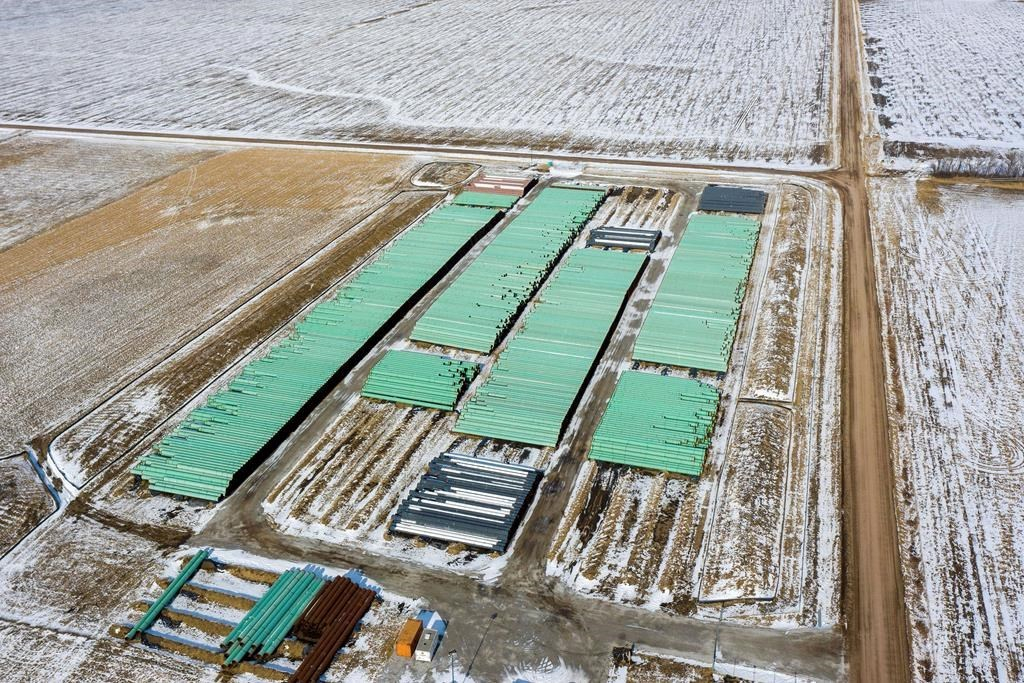 Alberta Premier Jason Kenney has said the province has about $1 billion at risk if the project were killed. Photo by Chris Machian /Omaha World-Herald via CP
Previous story
Next story

CALGARY — The cancellation of the Keystone XL pipeline by U.S. President Joe Biden is a major setback for Canadian Indigenous people, says the leader of a group promoting their participation in oil and gas development as a solution to poverty on reserves.

The decision means fewer jobs in the short term for Indigenous people in constructing the pipeline and supplying goods and services for it, said Dale Swampy, president of the National Coalition of Chiefs.

It also implies more long-term unemployment for those who work in exploring and developing conventional and oilsands projects in Western Canada because it impedes investment in production growth, he said.

"It's quite a blow to the First Nations that are involved right now in working with TC Energy to access employment training and contracting opportunities," said Swampy.

"Within Alberta, First Nations are pretty closely entrenched with all of the activities occurring with the oil and gas industry. Any change, especially a big change like this, really affects our bands' ability to keep our people employed."

The demise of the pipeline means Natural Law Energy, which represents five First Nations in Alberta and Saskatchewan, will no longer be able to make an equity investment of up to $1 billion in Keystone XL, a plan announced by builder TC Energy Corp. in November that was expected to be extended to American Indigenous groups as well.

But the relationship with TC Energy is expected to continue, said executive director Brian Mountain, with Natural Law making investments as a partner in other projects including renewable energy.

"We don't know how many terms Biden is going to be in for, it might be for one or two," he said, adding his group met with TC Energy executives on Friday morning to talk about next steps.

He said none of the proposed projects has been confirmed as yet but said the group is confident of getting bank financing for its role.

The impact on Indigenous people goes beyond direct equity investment, Swampy said, noting that four of his five sons normally work in oil and gas but one has been unable to find a job in the current downturn.

The demise of the pipeline means Natural Law Energy, which represents five First Nations in Alberta and Saskatchewan, will no longer be able to make an equity investment of up to $1 billion in Keystone XL.

Swampy is a former CEO of the Samson band. The coalition he heads was created in 2017 by Indigenous equity partners in the cancelled Northern Gateway pipeline and has a membership of about 80 bands.

Grand Chief Stewart Phillip, however, said the threat of global climate change is of "paramount importance" and is the reason Biden was elected president.

"I absolutely believe the writing is on the wall for the oil industry. It's going downhill," the president of the Union of B.C. Indian Chiefs said in an interview.

He suggested that Indigenous people who depend on pipeline or oil production jobs should prepare for the future by getting work in renewable energy.

"Those jobs are transient in nature ... It's a myth that pipelines represent an economic boom for a particular area," he said.

She said Biden's decision is a "kick in the teeth" for Canada and its Indigenous people.

In a report published in December, energy industry labour data firm PetroLMI said about 13,800 self-identified Indigenous people were directly employed in Canada’s oil and gas industry in 2019. That's seven per cent of total industry employment, compared to three per cent in other industries.

TC Energy approved spending US$8 billion in the spring of 2020 to complete Keystone XL after the Alberta government agreed to invest about US$1.1 billion (C$1.5 billion) as equity and guaranteed a US$4.2-billion project loan.

Alberta Premier Jason Kenney has said the province has about $1 billion at risk if the project were killed. Earlier this week, he called on Ottawa to demand talks with the U.S. about the pipeline and, if those prove unfruitful, to impose economic sanctions.

The 1,947-kilometre pipeline is designed to carry 830,000 barrels a day of crude oil from Hardisty, Alta., to Steele City, Neb., where it would connect with the company's existing facilities to reach the U.S. Gulf Coast refining centre.

People lamenting the loss of

People lamenting the loss of Keystone XL and the decline of the oil & gas industry have hitched their horses to the wrong wagon. We have no fossil fuel future. The sun is setting on the oilsands. Wake up! Get in a lifeboat or go down with the ship.

Dale Swampy, president of the National Coalition of Chiefs: "It also implies more long-term unemployment for those who work in exploring and developing conventional and oilsands projects in Western Canada because it impedes investment in production growth."
Precisely. That's the point. Get with the program, already.
The fossil fuel industry has seen the writing on the wall for decades. Decades to prepare for the transition. Now they want to delay decades more. No chance.

Oilsands expansion is incompatible with Canada's climate targets. The oil industry, the Big Banks, oil-soaked politicians, and misguided First Nations are betting on climate action failure.
Eventually, dreams of perpetual fossil fuel growth will collide with reality.
The sooner the National Coalition of Chiefs and other fossil fuel dreamers accept that reality, the better. Change is a fact of life. In a rapidly evolving world, the winners will be those who adapt. Those who refuse to change will be left behind.

In a world ravaged by climate change, our grandchildren will weep for our intransigence. Stop obstructing climate action.
Let's get on with the 21st century.