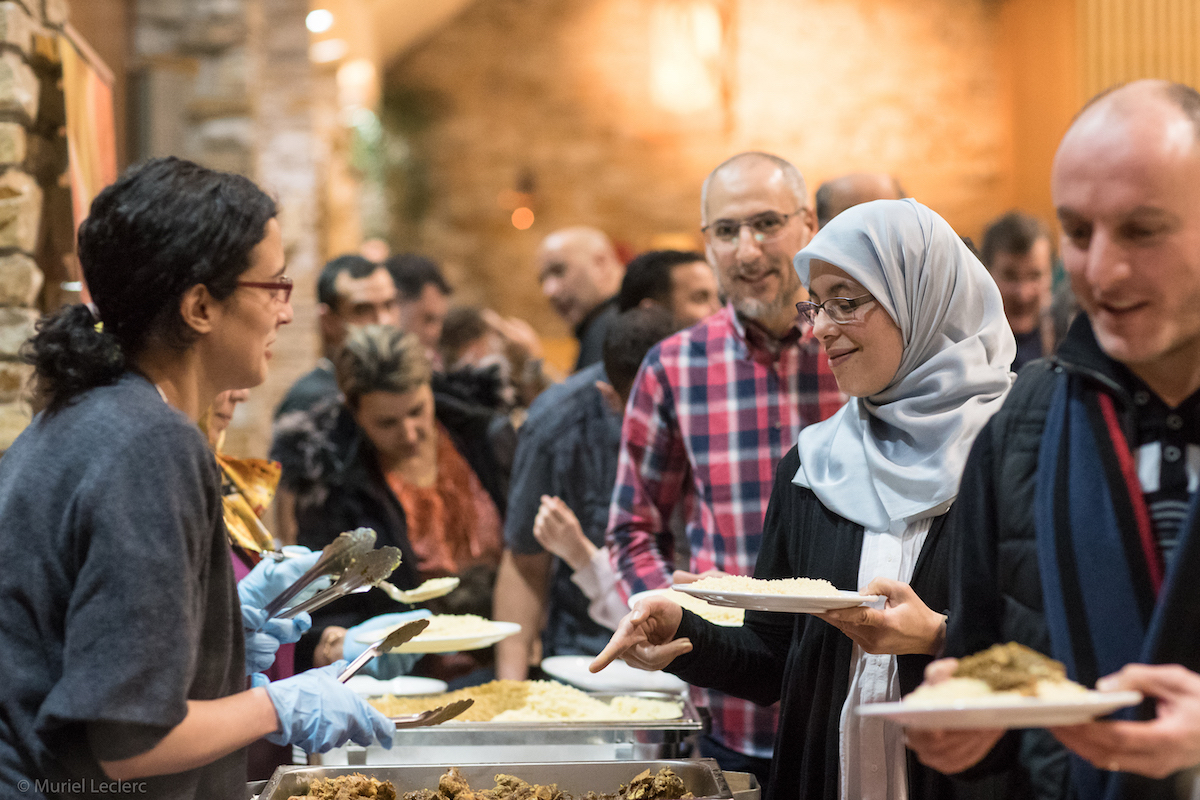 People enjoy a meal at a 2020 commemoration event remembering the victims of the Quebec City mosque attack. Photo by Muriel Leclerc
Previous story
Next story

This is the third in a three-part series on the fourth anniversary of the Quebec City mosque attack. You can also read Part 1 here and Part 2 here.

It certainly was that night four years ago when a gunman murdered six men at Ste-Foy’s Islamic Cultural Centre. Each year when the anniversary date arrives, events are organized to resist the city’s desolation in January and the cold terror of that night in 2017.

With COVID-19 restrictions in place this year, planning the fourth anniversary has been a challenge. This year’s memorial will be nothing like the last, where hundreds of people drew close in a warm room to share couscous and chickpeas, ginger juice and carrot cake, a meal intended to recall the Maghrebin, Guinean and Canadian roots of the victims and survivors of the attack. In a scene that seems almost impossible now, people traded stories over supper, embraced and shook hands, just weeks before COVID-19 changed everything.

This year, the commemoration will be held outside, and Canadians will be invited to participate virtually. As members of the organizing committee, we would not have dreamed of cancelling the event, which has brought together thousands, reached across divisions and created lasting relationships.

As the anniversary drew near, I found myself reminiscing about last year’s ceremony, which was held at Église Saint-Mathieu, a modern church built with a high, sloping ceiling and an imposing organ at the front, just behind the altar. Pews were replaced by tables with white linens, and we ate together in the sanctuary, just blocks from the Islamic Cultural Centre.

From the pulpit, the most electrifying speaker of the night was Webster, a local rapper and historian, who said: “Jan. 29, whether or not we want to recognize it, is etched in our minds, our hearts and our souls as a day to fight Islamophobia and intolerance.” He received an incredible wave of applause.

His line, “whether or not we want to recognize it,” was a response to Quebecers who reject the connection between Islamophobia and violence in Quebec society. Premier François Legault has refused to accept the existence of Islamophobia, too, as evidenced in remarks he made just days after speaking at the commemoration in 2019. He continues to reject the existence of systemic racism in Quebec.

Today marks the fourth anniversary of the deadly attack. Each year since it happened, we organize a memorial to ensure the city and all Canadians never forget that night and the hateful ideology that led to it happening.

The act of remembrance is a critical part of resisting racism and Islamophobia, @NoLore writes on the fourth anniversary of the Quebec City mosque attack. #IRememberJanuary29

Each commemoration has been planned by a committee I helped found, comprised of volunteers typical of Quebec City — community workers, public servants, trade unionists, IT specialists. We call ourselves the I Remember January 29 Collective, and our purpose is to ensure Quebec City remembers Ibrahima Barry, Mamadou Tanou Barry, Khaled Belkacemi, Aboubaker Thabti, Abdelkrim Hassane and Azzedine Soufiane, the worshippers murdered inside the walls of the mosque.

Ahmed Cheddadi, who survived the attack, was moved when he saw vigils organized by people who had no association with the mosque and who weren’t touched directly by the violence. The horror was too fresh for him to get involved right away. But through a connection to an organization called One World Strong, a group founded by survivors of the Boston Marathon bombing, Cheddadi joined the efforts. For the third vigil in 2020, he organized security and logistics and spoke on behalf of the survivors.

Cheddadi tells me how important it is that we ensure a connection with other tragic events, like the attack in Boston. Indeed, solidarity has been at the core of the commemoration work. There has been a longstanding relationship between the committee and PolySeSouvient, the survivors’ organization from the École Polytechnique attack, and each year the commemoration recognizes the Carrier family and their friends, six of whom were killed in Ouagadougou, Burkina Faso, one year before the attack in Ste-Foy.

My involvement is driven by the belief that the act of remembrance is a critical part of resisting racism and Islamophobia in our city. As the survivors from the attack at École Polytechnique have shown, remembering each year allows us to take stock of how much, or how little, changes from year to year.

The committee has brought people together from multiple faith, language and cultural groups. And importantly, the involvement of survivors has grown. As a result, the commemoration’s message has matured since 2017.

Underpinning the commemoration is the understanding that systemic racism and Islamophobia have a deep impact on Quebecers’ safety and well-being. The night of the 2020 vigil, Legault’s Facebook page was bombarded by racist comments from people outraged that he participated in the commemoration. His staff stayed up late deleting hateful comments.

Commemorating the Jan. 29 attack has evolved to resist prevailing politics that refuse to acknowledge systemic racism and Islamophobia. By commemorating what happened, the committee ensures that battling racism and Islamophobia remains at the front of our work. Each year, we not only honour the victims and survivors, but call out the systemic forces that allowed it to happen.

The hatred that drove the shooter to commit his acts were not isolated. He was inspired by far-right activists, was obsessed with Donald Trump and decided to commit his horrific crimes after seeing Justin Trudeau welcome refugees to Canada on Twitter. As the Trump era closes and white nationalist violence seems to be on the rise, confronting Islamophobia and white supremacy has never been so important.

The commemoration is only a small part of anti-racism activism in Quebec City, but through commemoration and solidarity, we organize to remember and to ensure that it never happens again. For Cheddadi, he sees organizing annual commemorative events “as a responsibility, both done in the memories of those who died, but especially for the next generation.”

Nora Loreto is a freelance writer based in Quebec City.

When it comes to hate

When it comes to hate propaganda against specific groups, I believe that Quebecers are not better, but not worst than other societies. Today, Mr Trudeau has just proclaimed that January 29th would commemorate the shooting in the mosque of Quebec city. Great! But one has to remember that not only islamophobia, but anti-semitism, misogyny, white supremacy and anti-indigineous positions are also unacceptable in all societies, not just in Québec. Canada also has its share of such unacceptable phobias!
I have absolutely no use for « les radios poubelles » (translation= trash radio?) that are specific to the Québec city area; but, as a citizen, I am powerless to censure them! A few years ago, a loud mouth of these radios stations has refused the challenge to debate their positions on a popular program of Radio-Canada known as TLMEP( acronym for Tout le monde en parle)

More to the point, how do you engage in a « dialogue » with groups that promote hatred, climate denialism, and conspiracy theories in medias such as Qanon???? What can you do or say to change their mind? If you censure them, then you destroy one of the fondation of democracy! If you let them spew they venom, then, you allow them to poison the mind of vulnerable individuals. The madness of hatred + « alternative facts » of some medias led to the assault on Capitol hill on January 6, 2021.

In Québec, we have had our share of shoot-outs. Dawson College (2006) and Polytechnique (1989); the latter targeting women who dared to study in order to become engineers. As a testimony to commemorate the victims of Polytechnique's massacre, Quebec's society led a long crusade to control the sale of firearms and to have a gun registry. Unfortunately, the gun lobby convinced the federal government of Mr Harper to abolish and destroy the gun registry despite favorable opinion polls and the unanimous vote of the 125 elected members of « L 'Assemblée nationale ». The victims at the mosque shooting have January 29 to commemorate their memory; the gun registry to commemorate the victims of Polytechnique has been abolished. Why?

The delicate balance between freedom of opinion, respect and acceptance of « others » is a universal problem. The social medias have changed that unstable equilibrium since the advent of internet. Neither Lépine in Polytechnique, nor Bissonnette in the mosque are representative of Quécec's position; but both were unbalanced individuals who were negatively influenced by bullshit propaganda. Ultimately, they pulled the trigger, because guns were easily available.

In Asia, Australia, Europe, the USA, Canada and Québec, the dilemma continues to be Freedom of opinion vs the venom of hate propaganda. Once more, please remember that Quebec is not better, but not worst than other societies!

Thank you for this and for

Thank you for this and for your participation. I am angry that it seems abnormal for Whites like me to stand up against this vile and destructive hate on our country.