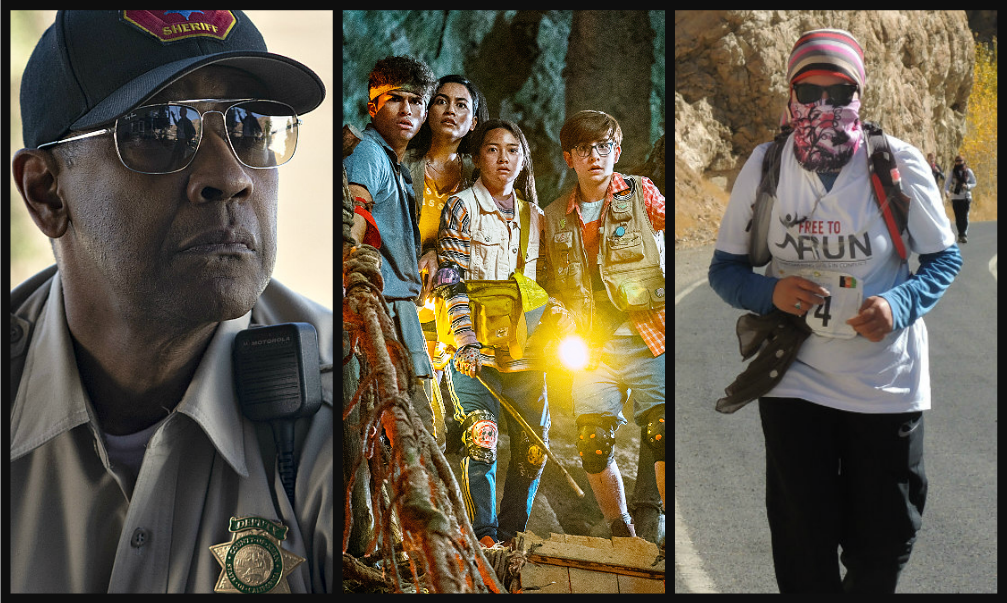 Black History Month starts Monday, and here are a couple of suggestions.

The Cinematheque is offering a free streaming over the next two weeks of an NFB film called John Ware Reclaimed, which tells the full story of a legendary Alberta character. Ware was born a slave in the United States, came north in the 1880s and became famous as a cowboy and rancher. The film details the racism he endured even here in Canada. This link to see the film goes live on Feb 1.

There’s a long list of Black-themed films at Hollywood Suite, the streaming service. They’re grouped by decade starting in the 1950s. And watch for the very powerful new film Judas and the Black Messiah, which I’ll review here next week.

Meanwhile, there are these …

THE LITTLE THINGS: This one is from a 30-year-old script and sometimes feels like it. But with the talent involved, it’s still a good choice for some fine acting and a story that’ll keep you interested. It’s from the same movie corner as Zodiac and Silence of the Lambs, not as gripping as either of them, though better than the many copycats about serial killers that followed them. Denzel Washington plays a burnt-out cop now working in a small town who is sent on what is supposed to be a quick errand to Los Angeles. It revives old memories of when he had become so obsessed with a serial killer case that he suffered a demotion, a divorce and bypass surgery all in one weekend.

He’s a relic to the new-style cops there, who he says, “Got no soul.” When one (Rami Malek) invites him along to a murder scene, and he notices key details because he pays attention to “the little things,” the two partner up and soon identify a suspect (Jared Leto).

There’s an interrogation scene where it hits home: Three Academy Award winners facing off around a small table. It’s a highlight, although all of Leto’s scenes, full of his snide taunting, are special. He seems guilty, but we’re left unsure. Is Denzel’s character still haunted by that old case he never solved and imagining it has returned? The script by director John Lee Hancock is shaky on that and other plot points that come and go. More intriguing is an attitude: These cops break rules, like no search warrants. Justified? A good talking point after an engrossing movie. (In only five theatres — New Brunswick and Saskatchewan — and available as Premium video on demand from iTunes, Cineplex and others for $25. Worth it if two or more are watching.) 3½ out of 5

FINDING 'OHANA: That’s a word in Hawaii meaning family, in the sense of extended, or community. And that’s the theme playing out subtly behind this excursion by a family from Brooklyn, whisked to the island of Oahu to care for an ailing grandfather. He’s Hawaiian and talks of respect for the local culture, which 12-year-old Pili (newcomer Kea Peahu), her brother and a couple of new friends will have to deal with in this sunny adventure. It’s a fine one to watch with the kids, and not unlike what Disney used to make and you might remember from your youth.

A local legend and an old notebook found in granddad’s room talks of a pirate crew and a treasure in gold that nobody has been able to find. Pili thinks she can and follows the fragments of information in the book to a cave in a mountain, down a crevasse, past bones and skeletons to a huge chamber that reminds me of old films like Journey to the Centre of the Earth. The film stirs up the same sense of wonder and discovery, but things aren’t what they seem and there’s a strong lesson here about tradition and customs. We see the pirates’ actions in imaginary interludes and then a pursuit by a horde of “night warriors.” The kids won’t be disappointed. (Netflix) 3½ out of 5

THE SECRET MARATHON: If you want inspiration you can’t do a lot better than this film. It’s small and plain, but most encouraging. It starts with a problem far away: Women in Afghanistan were, maybe still are, barred from sports like marathon running. An international organization persuaded one to run in one five years ago, the Guardian newspaper reported it, and in Alberta, runner Martin Parnell read about it and was moved to action. He went and ran there the following year, brought a camera crew and directors Kate McKenzie and Scott Townend and filmed another run and several women who dared to compete. Their numbers have been growing every year.

The film tells their stories. The original woman, Zainab, had suffered so much backlash and so many threats that she wouldn’t appear on camera, or even let her full name be used. She’s heard though, through an actor’s voice and shown in animated sequences, telling of the ordeal and the need she feels. She and other women talk of “real freedom.” As one says: “If I run hard enough, the negative voice stops.” The film echoes that. Enough with the negative stories, it says. Ordinary life goes on there, too. A visit to a family living in a cave is an exception, but overall, this is a positive visit. The film has been at festivals and at various times through Sunday will be available to stream in five provinces and five countries. (Details at https://ca.demand.film/the-secret-marathon/) 3 out of 5

PENGUIN BLOOM: There’s no penguin here, just a magpie given that name when found with an injured wing. Its recovery is a direct parallel to that of Naomi Watts playing real-life Australian sportswoman Sam Bloom. She took a fall while on a family vacation in Thailand, broke her back and was paralyzed from the chest down. It’s not a gimmick this conjunction of the two injuries; it really happened that way, according to the popular book by her husband and the narration in the film by an actor as one of her sons. She remained in a wheelchair, but her life spark returned thanks to the bird.

Watts is fine conveying the deep depression her character suffered. She had been an avid surfer, though that’s not established well enough. Now, she couldn’t even get out of bed by herself. In a fit of anger, she smashes all the pictures on the wall that show her doing sports. Penguin, meanwhile, walks freely around the house, plays with a doll and sits on Naomi’s shoulder. I’d say the real star of this film is Paul Mander, the magpie trainer who got the several birds that perform the role to move and act and peck so elaborately. There’s a strong scene when two other birds attack Penguin for intruding in their territory. Sam, meanwhile, stops moping and is taught kayaking. This is another film the whole family can watch because you can excuse the sentimental and clichéd scenes and absorb the inspiration that’s intended. (Started on Netflix two days ago.) 2½ out of 5

SAVAGE: Gang life in New Zealand gets a thoughtful and dramatic study here, but don’t look for a match for that great film Once Were Warriors. It examined the lives of some low-life Maoris down there. This one has a mixed crowd of hard-drinking, hard-fighting and hard-swearing bikers whose mantra seems to be “Stay mighty.” Its sociology is a little less persuasive as it explores how they got there and what they think.

We get the picture through three time periods in the life of Danny, on his way to becoming a gang enforcer who calls himself Damage. At the age of nine, he is abused by his strict Christian father. As a teen, he’s sent to juvenile detention where he becomes tough and meets a friend named Moses. They form a gang when they get out and call it the Savages because, as Moses says, humans are like animals. They don’t need rules; just instinct. There are rules, of course, because the gang is not only for protection and for respect, but also for a feeling of family. The leader rules, a rival wants to oust him and Damage, played by Jake Ryan, has to follow orders and punish any miscreants. Gradually, though, he develops doubts, even about the strutting type of masculinity he and the group are prone to. The film is both virile and questioning. (Stream from Apple TV) 3 out of 5

JIU JITSU: Nicolas Cage fans are not going to get all they’re after. He’s the biggest name in this one, but pretty much a secondary character. And he has only one short, crazy freakout scene.

Oh, and there’s no jiu jitsu, either. Not that I’m an expert. It looks like kickboxing to me. Action star Alain Moussi is at the centre of this one. He was born in Africa to a French-Canadian mother, and trained by a Canadian. He plays Jake in this film, has no memory of why he’s there and keeps hearing about a “plan” that he has devised and others are following. The fate of mankind is at stake. (The comic book ambience is set by a single drawn panel at the start of each chapter.) It seems that every six years, an entity called Brax arrives on a comet and demands the local warriors fight him. He’s insulted if they don’t. Moussi didn’t the last time and has to correct that shame. He also faces Cage in one duel and Tony Jaa does a couple of fights. The story is dumb, but there’s some great stunt work here. I particularly like a forward flip that turns into a backwards kick to a guy’s head. American director Dimitri Logothetis made this in Cyprus. (Now available on demand, electronic sell-through or DVD.) 2 out of 5

PHOBIC: Interesting idea, not well-handled. There’s a serial killer, you see, who torments his victims by exposing them to their worst fears. As someone says: “There are some weird phobias out there.” One victim is terrified by dolls and mannequins. A man with fear of the dark, is found dead in a darkroom. Odder than that: A woman has a phobia about the colour red. Her bedroom has been painted brightly in that colour. A homicide detective, played by Jacque Gray, investigates, and wouldn’t you know it, has been under treatment for a phobia herself.

She discovers an experimental treatment program run by a female doctor. Her clients seem to be the victims, but how the killer gets their names isn’t clear. The doctor explains that one cure involves transferring a person’s phobia to a device with a flashing light. That explains the recurring dreams the detective has, in which she climbs a staircase and sees the strobe light and a shadowy figure of a man. It doesn’t explain much else, though. A late reference to Russian experiments to create a human-animal hybrid makes no sense at all. The atmosphere is cool; the storytelling isn’t. Directed by Bryce Clark in Utah. (Available VOD and EST.) 2 out of 5