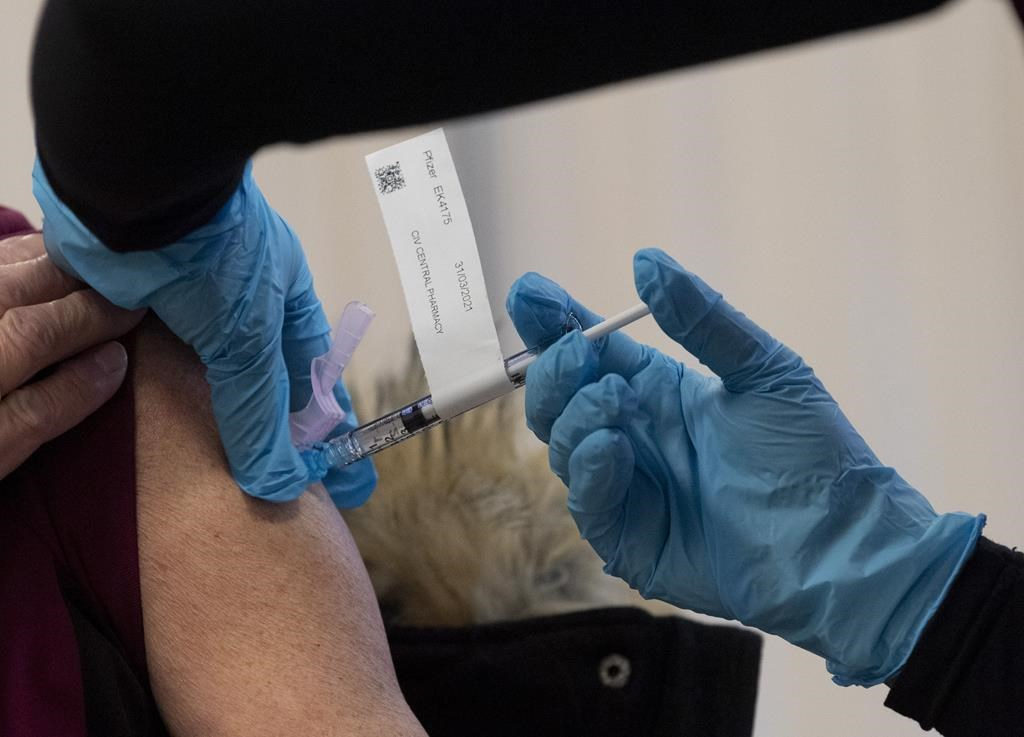 The Pfizer-BioNTech COVID-19 vaccine is administered to a personal support worker at the Ottawa Hospital on Tuesday, December 15, 2020 in Ottawa. File photo by The Canadian Press/Adrian Wyld
Previous story
Next story

Health Canada is on track to give the green light to a third COVID-19 vaccine within the next two weeks and a fourth may not be far behind, offering a glimmer of hope at the end of a week of nothing but vaccine vexation.

Eric Morrissette, chief of media relations at Health Canada, said Friday the regulatory team that has been reviewing an application from AstraZeneca since Oct. 1, is now doing its final assessment of the vaccine's clinical data.

It's a back-and-forth process with the manufacturer answering any questions the review team has.

AstraZeneca was the first to apply for approval for a COVID-19 vaccine in Canada and has been greenlit in 15 jurisdictions including the United Kingdom, Mexico, India, and as of Friday, the entire European Union.

Dr. Supriya Sharma, Health Canada's chief medical adviser, said earlier this month the review was "a bit more complicated" because in AstraZeneca's trials, some volunteers only received a half dose at first.

A big trial underway in the United States is supposed to provide more clarity, but Morrissette said Friday that trial won't report findings until March and Health Canada's team has decided it has all the clinical data it needs. It also has all the information it needs on the manufacturing processes.

A fourth vaccine could be close at hand as well, after Johnson and Johnson reported Friday that Phase 3 clinical trial results — typically the last before a drug is approved for wide use — showed its vaccine is about 85 per cent effective against serious illness from COVID-19. Johnson and Johnson, which submitted an application to Canada for approval Nov. 30, offers the only single-dose vaccine thus far.

Health Canada approved Pfizer-BioNTech's vaccine on Dec. 9. and Moderna's on Dec. 23, each time about three weeks after Phase 3 trial results were publicly reported.

Canada has pre-ordered 10 million doses from Johnson and Johnson with the potential to get 28 million more, and 20 million doses from AstraZeneca. But the federal government has not said when those doses would be delivered, and recent days have shown deliveries for COVID-19 vaccines are constantly subject to change.

Moderna became the third vaccine-maker in two weeks Friday, to announce production delays will cut into its upcoming deliveries.

The Massachusetts-based biotech firm shipped more than 340,000 doses to Canada in the last month, but next week's shipment is getting cut by about one-fifth, or 50,000 fewer doses, because of slower-than-expected production of the drug components by Moderna's manufacturing partner, Lonza. Similar reductions are affecting Europe.

Moderna's Canadian country manager Patricia Gauthier said the company will ship all two millions doses its contract stipulates by the end of March. Canada bought 40 million doses from Moderna overall, with most of them contracted to arrive between April 1 and Sept. 30.

Canada's budding vaccination effort shrivelled this week when a temporary production slowdown caused Pfizer and BioNTech to cancel an entire shipment of more than 208,000 doses, after cutting last week's shipment by about 20 per cent. The next two weeks' deliveries will be cut by about 80 per cent before mostly being restored the week of Feb. 15.

Pfizer is also now asking Canada to agree each of its vials contains six doses, rather than five, which would allow it to ultimately ship fewer vials to meet its obligation of four million doses by the end of March, and 40 million by the fall.

AstraZeneca is cutting deliveries to Europe by 60 per cent through the end of March because of production problems in Belgium. That, coupled with Pfizer's delays, prompted the European Union to require vaccine makers to report on how many doses are being produced and exported from Europe.

All of Canada's Pfizer and Moderna vaccine doses are made in Europe. Canadian officials won't say where Canada's doses from AstraZeneca are to be made, but insist they will be unaffected by the European production problems.

Canada is not among more than 120 countries exempted on paper from the export controls, but Prime Minister Justin Trudeau said European Commission President Ursula von der Leyen assured him in a phone call Wednesday that the export controls won't affect Canada.

Despite the production hiccups, Trudeau insisted Friday Canada's vaccine program is on track, noting production problems when the world is trying to build manufacturing lines for new products in massive demand are not a surprise.

Canada's current vaccination plan says there will be three million people vaccinated by the end of March and another 10 million by the end of June, and that anyone else who wants to be immunized will be by the end of September.

Conservative Leader Erin O'Toole said the government needs to be more transparent about its vaccine contracts. Canada has contracts with seven COVID-19 vaccine-makers but has never published any details, including prices or delivery timelines.

The United States released redacted versions of contracts it has, and the European Commission Friday released a redacted AstraZeneca contract and said it wants to release the rest as soon as possible. It has to negotiate doing so with the companies.

Trudeau said Friday Canada will try to do that too but won't jeopardize getting vaccines to Canadians as quickly as possible.