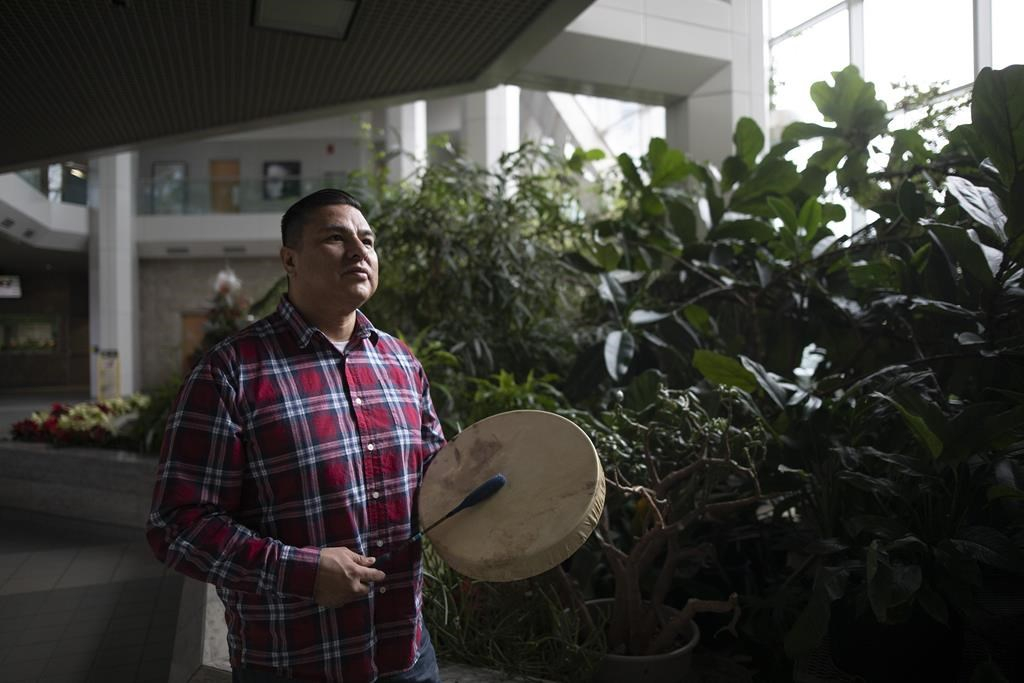 Young Spirit Singers co-founder Jacob Faithful stands for a portrait inside the University of Saskatchewan in Saskatoon on Sunday, Jan. 20, 2019. File photo by The Canadian Press/Kayle Neis
Previous story
Next story

The Alberta man from the Frog Lake First Nations says he's worked through several headaches that come with starting a business during a pandemic and will soon be opening the first mask manufacturing plant on a Canadian reserve that is fully owned and operated by Indigenous people.

"We already spent enough money to get the machine imported from China to here in Canada. And then on Feb. 22, we're going to start making our own masks in Frog Lake," Faithful, 42, said in an interview with The Canadian Press.

Frog Lake First Nations is run by a band government about 200 kilometres northeast of Edmonton. Born and raised on the reserve, Faithful says life hasn't been easy for him and for the community's approximately 1,800 other members.

"It's a hard life to live with no opportunity on the Nation. I always wanted to be a part of the solution to a lot of things that were bad with the system," he says.

"My dad was an RCMP officer, and he always told me you can choose what kind of life you want. It's up to you and your hard work. I was always raised with that mentality."

He's planning to operate the mask manufacturing plant — Young Spirit Supplies — out of a community gymnasium and employ almost 20 Indigenous people. He says he's also hoping the readily available and more affordable masks will bring down COVID-19 cases on the reserve.

People can send him an email in advance of the plant's opening to purchase the masks, which are designed by Indigenous artist Natasha Root of Quebec, he adds. Her colourful and traditional art is printed on the black masks.

"I feel proud and I feel like I'm part of the solution to fill a void. And, not only that, I believe we'll be saving lives."

Faithful says he was reselling janitorial supplies early in the pandemic when people from 11 different First Nations in Alberta and Saskatchewan approached him and asked for masks and hand sanitizer.

"All of these First Nations were really relying on me to get stuff for them to protect against the virus. That's where my whole endeavor started."

Faithful says he called Alex Dugal, CEO of surgical mask manufacturer Viral Clean in Ottawa, to inquire about how he could make face coverings.

"I started to ask questions like, 'Hey, what would it take to build our own manufacturing plant?'"

That's when Dugal offered to extend his operating licence to include Young Spirit Supplies, and both businessmen ventured forward.

"It's going to be fully owned by Jacob and his First Nation, and then my company is setting up the licensing and training them how to operate the factory," Dugal says.

In the spirit of helping his community, Faithful says he has given Frog Lake First Nations a 49 per cent stake in the company, even though he could have afforded the full cost of the manufacturing plant on his own.

"He graciously offered the First Nations a percentage ownership stake in this plant, so it was a no-brainer for us to to accept," says Chief Greg Desjarlais.

"We want to take care of our members," he says. "It's a good feeling that we can work with our band members to create a company that will create employment, and so the kids can see mom and dad going to work.

"That's a good feeling. It allows the kids to grow."

Faithful, a father of six, is also the co-founder of the Grammy-nominated drumming group Young Spirits Singers. The group performs in Plains Cree and has members throughout the western United States and from across Canada.

This report by The Canadian Press was first published Jan. 30, 2021

An Indigenous economy in B.C.: the new narrative