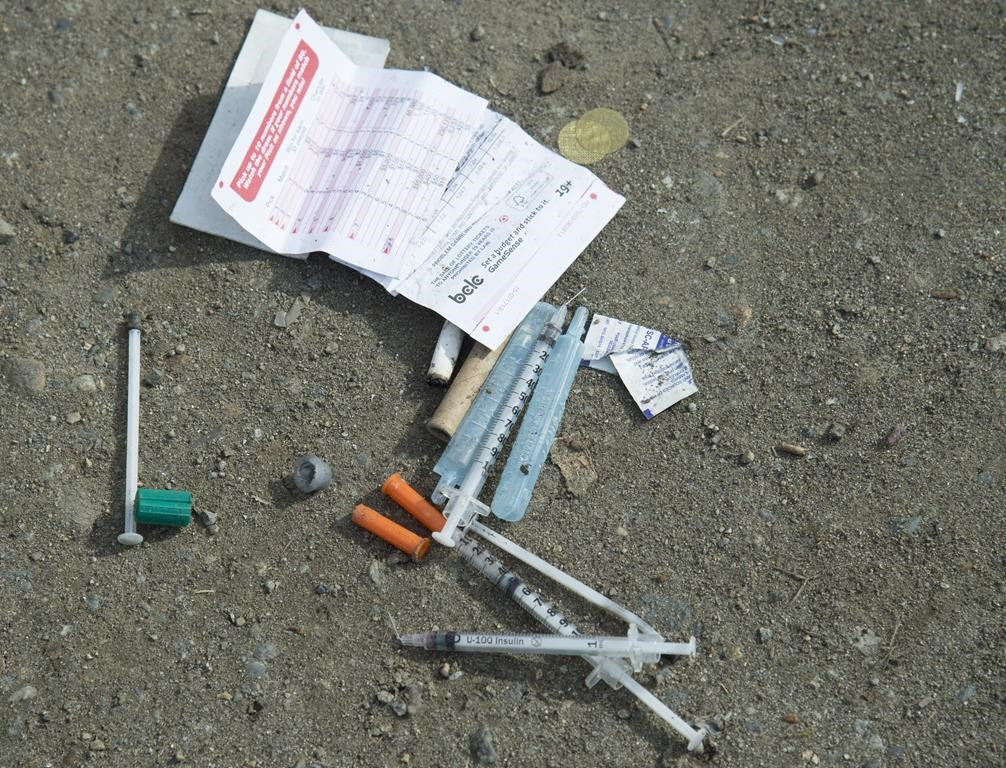 Needles are seen on the ground in Oppenheimer park in Vancouver's downtown eastside on March 17, 2020. File photo by The Canadian Press/Jonathan Hayward
Previous story
Next story

Four pilot projects in Vancouver and Victoria have received $15 million in federal funding to provide safer drugs for people at risk of dying from overdose as British Columbia faces a record number of annual fatalities.

They said more people are using drugs alone without anyone to help them if they overdose, which is an unforeseen consequence of the COVID-19 pandemic, while locally produced substances with extreme concentrations of fentanyl have replaced drugs that are not available due to border closures.

Malcolmson said 23,000 people are getting substitute prescription medication, a 395 per cent increase since March, as registered nurses and registered psychiatric nurses are trained to provide legal alternatives as part of an order last September by provincial health officer Dr. Bonnie Henry.

The coroners service has not yet released data on the number of overdose deaths in 2020, but the number of annual deaths is expected to exceed the previous provincial record of 1,549 fatalities in 2018.

New programs expected to start in the spring will be implemented through Vancouver Coastal Health, AIDS Vancouver Island Health and Community Services, the B.C. Centre for Excellence in HIV/AIDS and the Urban Indigenous Health and Healing Cooperative.

The programs in Vancouver's Downtown Eastside will be near existing services including overdose prevention sites, a supervised injection site and a unique program that provides medical-grade heroin to entrenched users.

Vancouver Coastal Health will expand peer support initiatives and allow drug users to take prescription alternatives home rather than consuming them at clinics, Daly said, adding visits to overdose prevention and supervised consumption facilities have plummeted during the pandemic.

"Even with all the good work of our teams on the ground who encourage people to come to overdose prevention sites, we're still only seeing about 60 to 70 per cent of the visits that we saw prior to the pandemic," she said.

#Vancouver and #BCVictoria have received $15 million from feds to provide safer drugs for people at risk of dying from #overdose as #BritishColumbia faces a record number of annual fatalities. #CDNPoli #bcpoli

Hydromorphone, methadone and suboxone are among the prescribed medications being offered, and medical-grade heroin is provided at North America's only clinic for people who have tried multiple programs to battle heroin addictions.

Some addiction doctors have criticized the lack of safer drugs for those experiencing entrenched addiction, with calls for Health Canada to allow for domestic production of medical-grade heroin that is currently exported from Switzerland.

Fry said the federal government is working to create a homegrown supply of prescription heroin and the government is also considering a proposal from the City of Vancouver to decriminalize the possession of small amounts of illicit drugs for personal use.

Guy Felicella, a peer clinical adviser with the Overdose Emergency Response Centre and the BC Centre on Substance Use, said forms of fentanyl that can be injected and snorted may have to be made available for people who seek a feeling of euphoria from street drugs.

"We really have to look at how substance users use their drugs and what drugs they're using. It's really the unpredictable doses that are killing people," said Felicella, who overdosed six times before seeking treatment.